At Least the Title's Appropriate 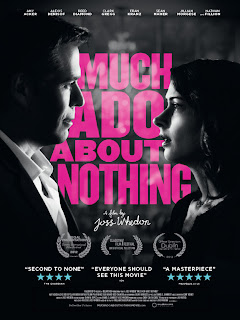 I'm not exactly married to the Kenneth Branagh version of Shakespeare's popular comedy, since I first saw it in middle school and haven't watched it since -- though I do remember the razor-sharp delivery courtesy Branagh and the incredible Emma Thompson (also, Emma's slow-mo bounce as she hey-nonny-nonnies 'cross the fields). So please please please don't assume that I could not get on board with Joss Whedon's contemporary take because I think Branagh is the master interpreter of the Bard. And do not think me anti-Joss, either: of his shows, I've only seen Roseanne, which is incredible; and I quite enjoy Toy Story, Atlantis: The Lost Empire, Serenity, The Cabin in the Woods and The Avengers.


But I kind of hated this movie. Like, a lot. It was awkward, flat, full of "humorous" moments that had me rolling my eyes in anguish. My seat partner, who enjoyed the flick, described me thus: "Every time I looked over at you, you were either shaking your head or grimacing."

Now, I understand that this was all a lark, a bit of weekend fun for Joss and friends, who apparently do readings of The Compleat Works after set. And yeah, it's kind of novel, a theatrical release of something we mortals would post to YouTube -- or, in my day, screen once, at a party. You can see how much fun everyone is having, and at least no one's lacking in chemistry. 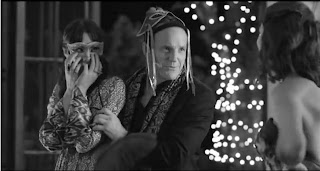 But they did release it to cinemas, so now it's a movie. Not a lark, but a submitted-for-your-approval adaptation. And from what I understand from those that enjoyed it more than I, it works as long you are familiar with the ensemble -- not as Benedick, Beatrice, Claudio, et. al., but as their characters from the Whedonverse. It's a film for his fans, his fans like it, so mission accomplished.

But they did release it to cinemas. So now I'm watching a group of friends having a good time while they spout Elizabethan verse as quickly and marble-mouthedly as possible, eyes blank, voices flat, playing at slapstick in an attempt to wring some laughs from this comedy -- because God knows the ensemble's listless readings aren't going to do it.

Perhaps that's too harsh. After all, some of the cast is successful at marrying the stylized verse with the contemporary setting -- Nathan Fillion, Spencer Treat Clark and Ashley Johnson are stand-outs, all three in small supporting roles. Fran Kranz and Reed Diamond, too, though I didn't think much of their drunk act. Clark Gregg's fine for the most part, though he looks lost when things take a more serious turn.

Otherwise, it's an ocean of mediocrity, led by a desperate Alexis Denisof, who looks drenched in a panic-stricken sweat as he clumsily flatlines through every joke and witticism. Isn't Benedick supposed to be some masterful verbal sparring partner? Does Denisof even know what he's saying? Does Whedon? Both give Benedick quite a bit of fussy "business" to do, perhaps sensing Denisof's presence leaves much to be desired.


His chief accomplice in dulling the piece is Amy Acker, who I keep hearing is brilliant but who I found just a smidge more credible than Denisof. Acker plays Beatrice out of the corner of her mouth, every thought a lazy-sounding aside. She takes a fall pretty well, but Jesus, this is the funny one? Benedick, if your horse had the speed of her tongue, he wouldn't make it out of the stable 'til sundown.

Orbiting around these two is a deflated cast wanting for energy. Shakespeare is dialogue, so the production tends to sink if everyone's delivery has all the sizzle and subtext of middle-schoolers reading aloud from the Social Studies textbook. Some have succeeded in executing directorial conceits meant to highlight themes or adapt the unadaptable-- think Julie Taymor's Titus, Kenneth Branagh's Love's Labour's Lost -- but this production is clearly emphasizing the words and the performances. Sets, costuming, directorial flourishes, all are pared down so that nothing can distract from the performances. The whole film hinges on the actors' grasp of the language and their roles. That grasp is a light touch, indeed.

Even the party sequence is deadly. A lot of boring people standing around, watching twin trapeze artists dangling from a tree? Sounds almost fascinating in theory, but it didn't look like anything I'd want to attend. You know things are bad when the laughs in Beatrice's skewering of Benedick, all while he stands disguised before her, are meant to come from neither the situation nor her words, but from some extra limply pawing at her.

﻿
I guess, in the end, it is appropriate that Whedon chose to shoot in black and white; this adaptation is, indeed, colorless.

Email ThisBlogThis!Share to TwitterShare to FacebookShare to Pinterest
Labels: 2013, Joss Whedon, Much Ado About Nothing, reviews

Hey I know this is off topic but I was wondering if you knew of any widgets I
could add to my blog that automatically tweet my newest twitter
updates. I've been looking for a plug-in like this for quite some time and was hoping maybe you would have some experience with something like this. Please let me know if you run into anything. I truly enjoy reading your blog and I look forward to your new updates.