And Now The Screening Starts...

I have not seen very many new releases so far this year - just ten in three months! Here are a few thoughts on what I have seen...

Annihilation
dir/scr: Alex Garland, based on the novel by Jeff VanderMeer
seen: Pacific's The Grove Stadium 14

All the tweets I saw about how "mind-blowing" this movie is, could not prepare me for how often I dropped my jaw and silent-screamed at the screen. I don't know what to say because half the experience is the surprise and realization of what this kooky little flick is doing, and the less you know, the better. Just see it so we can bond over the dreamy climax, a sequence that had my brain at a meditative level that felt almost religious, spiritual. Annihilation, man. Wow.

More after the jump, including Fifty Shades Freed, Black Panther, and even a friend's film!

Click Here to Read More »
Posted by Walter L. Hollmann at 6:42 AM No comments:

It's the most up-in-the-air category this season, making for one of the most exciting Best Picture races in history. Best Picture is decided by a preferential ballot system that I am not going to explain but recommend you look up, which for many means that the least divisive nominee with the most fans wins - thus, The Shape of Water, which few dislike and which won the big prize at the PGA Awards and DGA Awards. But each Oscar year tends to follow a pattern, meaning your Best Picture winner is most likely whoever's won the most going in - thus, Three Billboards outside Ebbing, Missouri, which triumphed at the SAG Awards, Golden Globes, and BAFTA Awards. But also, the past four winners first triumphed in the Best Film category at the Independent Spirit Awards - thus, Get Out, which just became the latest to win that honor on the eve of the Academy Awards.

Click Here to Read More »
Posted by Walter L. Hollmann at 11:22 AM No comments:

Email ThisBlogThis!Share to TwitterShare to FacebookShare to Pinterest
Labels: 2017, Allison Janney, Call Me By Your Name, Darkest Hour, Dunkirk, Frances McDormand, Gary Oldman, Get Out, I Tonya, Oscars, Sam Rockwell, The Shape of Water, Three Billboards outside Ebbing Missouri

Yesterday, Victor/Victoria and Poltergeist led the pack with two wins each out of the nine categories. Today, we conclude our trip back to 1982. Again, check out the 1982 Retro Hollmann Awards Nominations and Top Ten for more context.

Everything hits at the right time in The Best Little Whorehouse in Texas: every dance step, musical sting, double entendre. It takes its time for "Hard Candy Christmas" and the date night between Mona and Ed Earl, then ramps up the energy for "The Aggie Song", "Little Bitty Pissant Country Place" and the encounter between Ed Earl and Melvin P. Thorpe. Not a wasted moment.

Click Here to Read More »
Posted by Walter L. Hollmann at 7:13 AM No comments:

The 1982 Retro Hollmann Awards, Part One

It's the 1982 Retro Hollmann Awards, celebrating the best in cinema 35 years ago!

With the exception of Best Ensemble, which doesn't exist at the Oscars, the categories are presented in the same order as they were at the original 55th Academy Awards on April 11, 1983. Shall we begin? 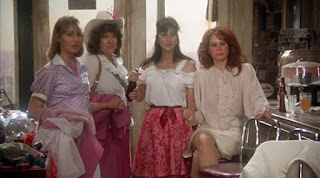 
If you want an effective cast, have them do the play first! It worked for Fences, and it worked for Come Back to the 5 & Dime Jimmy Dean, Jimmy Dean, which transfers the entire cast from the original Broadway production to the big screen. Smart move for a story about women who've known each other 20 years; there's a real sense that everyone not only knows one another but has for decades. An easy, unmistakable familiarity.

In second, the students and faculty of Ridgemont High. In third, the offbeat assemblage of personalities in Eating Raoul. In fourth, Tootsie's New York showbiz types. In fifth, the families at the center of Best Friends.
Click Here to Read More »
Posted by Walter L. Hollmann at 2:54 PM No comments: