Cross one item off my Top 25 Most Anticipated:

Roundy: The Great and Powerful

So I saw Oz: The Great and Powerful last night. Thoughts on that forthcoming, but like most people, I scanned the Internet to see what others had to say, and in the comments section of Hollywood-Elsewhere, I found this little gem:

Which of course got me to thinking about Shampoo and my own Casting Coup of it, in which I finally decided on Matthew McConaughey in the Beatty role even though I was also considering Bradley Cooper, and suddenly I thought, "Geez, why didn't I think of Franco?" Because he's got that great hair and the whole casual sexy player vibe. Maybe he's too young for the role? Was that why I didn't think of him? I don't know but here got me thinking of this: 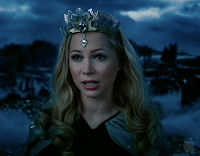 Glinda -> Jackie, though the finale is a little different 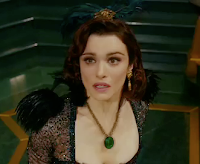 Evanora -> Felicia, not a perfect comparison but go with me on this

China Girl -> Lorna, and I know how that sounds but it's a minor vying for his attention
(and besides, that fanfic is gonna come up soon, you just know it (oh god, what would that even look like?))

Silliness, I know, but don't you love seeing the parallels between disparate films?

Posted by Walter L. Hollmann at 4:16 PM No comments:

Email ThisBlogThis!Share to TwitterShare to FacebookShare to Pinterest
Labels: Oz The Great and Powerful, Shampoo

Ah, once again, I've bitten off more than I can chew. It's already March, the Oscars are over, so there's no reason to stay in 2012 for much longer. My Top Three are reviewed below in the Best Picture column, but let's gaze first at Makeup, Supporting Actress and Art Direction: