If you follow me on Twitter, you may have already guessed this, but there’s a new retrospective starting June 1st: the films of 1992! Inspired by the 1992 Horror episode of Screen Drafts (with special guest GMs Joe Begos and Graham Skipper), I’m catching up with the theatrical releases drafted therein, as well as that year’s Best Picture nominees from the Academy Awards and Golden Globes:

There will also, of course, be a handful of other 1992 US releases, from Captain Ron to Raise the Red Lantern, The Muppet Christmas Carol to Edward II, Bebe's Kids to Newsies - just to name a few.

It starts Monday, June 1st, with the nominees for Best Adapted Screenplay: Enchanted April, Howards End, The Player, A River Runs Through It, Scent of a woman.
Posted by Walter L. Hollmann at 4:11 PM No comments:

So far, of the 28 films nominated in eighteen categories, six films have divided the first nine awards among them. The Ten Commandments, which led the nominations with 15, also leads the wins with three...so far. 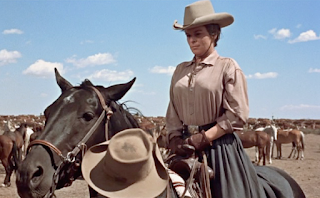 I still can't believe McCambridge is only in Giant for 10 minutes and change. It's a marvelously thorny performance that haunts the rest of the movie - her tenacity, her jealousy, her idea of what Benedict means. And she does it without unclenching her jaw. A subtle power.

In second, Foch's Bithiah is as loyal a mother as anyone could want. In third, Natwick's Griselda is straight-faced no matter what kooky incantations she spouts. In fourth, Hayes' Dowager Empress Maria Feodorovna is bitter, heartbroken, skeptical. In fifth, De Carlo's Sephora is patient beyond reason.


The rest after the jump.


Click Here to Read More »
Posted by Walter L. Hollmann at 12:40 AM No comments:

The 1956 Retro Hollmann Awards, Part One 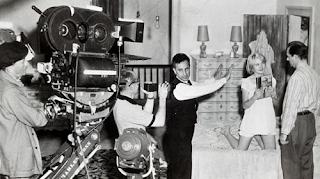 In Elia Kazan's hands, Baby Doll transcends its scandalous, trashy premise, but does so without looking down its nose at the material. There's dark comic energy, feverish sexuality, characters who are so comically alive, they must be real. Kazan understands the Southern Gothic appeal way better than most other filmmakers who try their hand at it.

Eight more categories, including Best Original Song, Best Actress, and both screenplay categories, after the jump.

Click Here to Read More »
Posted by Walter L. Hollmann at 11:55 AM No comments: