After much delay, the RETRO HOLLMANN AWARDS OF 1965 finally continue! Today, we remember that Martin Balsam won Best Supporting Actor, Thunderball was honored for Visual Effects, Darling's costumes (for black-and-white) and screenplay were declared the Best, and Doctor Zhivago added costumes (for color) to its cache of trophies -- and we determine who should have won, and indeed, who should have even been nominated. Unlike that ceremony, we will not be dividing craft categories between B&W and color; we will, however, guarantee 100% honesty in  our assessments. 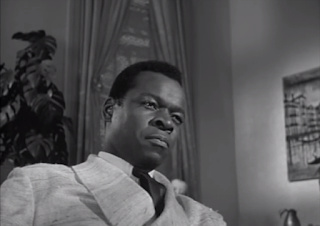 Leaves an impression, not just because we rarely get to see Peters in villain mode -- but because he's so damn good at it. So commanding a presence, he cannot help but dominate every scene he's in, even if it's just his voice over the phone. You can hardly blame Steiger for breaking down into tears -- Rodriguez is a son of a bitch who feels more dangerous than he already is.

4. Rod Steiger as Mr. Joyboy
The Loved One 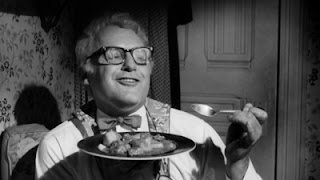 Who knew Steiger had this in him? Creepy, ridiculous, yet somehow...not unrealistic. Mincing about yet lip-smackingly obsessed with the film's heroine, Joyboy is a creepy mama's boy, a cross between Mr. Humphries from Are You Being Served? and Francis Dolarhyde from Red Dragon. It is perhaps the most dedicated performance I've seen from Steiger.

3. John Gielgud as Sir Francis Hensley
The Loved One

A brief turn, but this is where all the heart is. Gielgud, as a somewhat absent-minded thespian facing irrelevancy, is sharp in his comic timing -- and heartbreaking in his pathos. His once-over before leaving the studio for the last time is an emotional moment, and Gielgud does not overplay his hand. And besides, he sets the plot into motion. 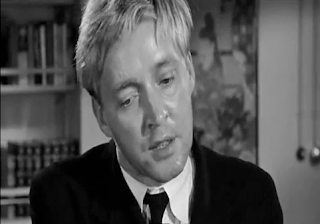 From my original post: "The film's beating heart, possessing all the complications and ambiguities that the rest of the ensemble is only able to convey on the surface. Apparently it's impossible for this man not to bring out the best in all his scene partners."

Another understated performance, but perhaps because he narrates and bookends the film, Guinness is more dominantly felt. He's masterful in his detached delivery, betraying some emotion on a rare occasion, and genuinely surprised by his own sentimentality. This is the performance I walked away thinking about.

Costumes, Original Screenplay, and more after the jump....

Over the next four days, I will share my own personal ballot for the films of 1965. Because honey, this is THE RETRO HOLLMANN AWARDS OF 1965!

In addition to the 65 films I previously listed, I watched Love Has Many Faces and The Cincinnati Kid -- I still missed out on The Hill and The Knack, but you know, c'est la vie.

We start our journey with two categories that did not exist for Oscar at the time; one of them still does not. And that one is...

A small but memorable cast of characters that you'd never want to be in the same room with -- a bunch of murderers and thieves.

4. The Flight of the Phoenix

An all-male ensemble -- and what an all-male ensemble! Even the characters killed off in the opening credits fit perfectly into this sweaty world director Robert Aldrich has established. Everyone feels essential -- even if Dan Duryea isn't given much to do, I'd still miss him.

Lynn Stalmaster
Perhaps an obvious choice for this category -- star cameos, character actors in the leads, an unusual leading lady, the immensity of Allyene Gibbons, and of course, a young Paul Williams playing even younger. All making for one surreal experience. 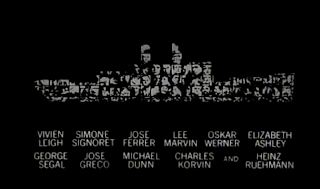 From the Spanish dance troupe to the Oscar-winning vets to the young newbies to the foreign stars, there's authenticity in every one. True, there are some performances I naturally gravitated towards, but it says something that no one truly outshined each other -- a very generous ensemble. 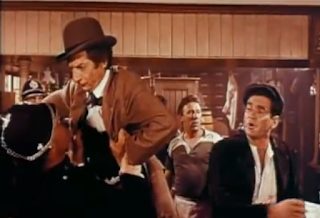 Miriam Brickman
Faces you recognize are suddenly unrecognizable -- but it's not makeup doing the trick, it's the pitch-perfect performances they're all giving! You really get the smell of the time and place, and oh, if only you could toast the way Rod Taylor toasts, or throw shade the way May Craig and May Cluskey throw it. Perfection, from the star to the extras.

Makeup after the jump....