Since 2008, I have posted the rankings of my favorite films of the year on the last day of the year. At first, it was just a Top Ten, but since 2009, I have compiled a Top 25. Why? Because I usually love more movies than I dislike; I have no real genre bias, nor do I differentiate between love for a wacky comedy, an Oscar contender, or Speed Racer. It's about what carries me off, lifts me off my seat and into the world of the film itself, forgetting for those two hours (or, increasingly, two and a half hours) that I am Walter Hollmann, blogger/movie theater employee. It's about what films remind me of why my best friend and I call ourselves Cinemaniacs.

Last year, I saw 82 films, and the result was a Top Ten that looked like this:

This year, I have seen a whopping 103 films, my best ever!

So my best friend and I have this show called CINEMANIACS, and we did a "Road to Gold" show following the New York Film Critics' Circle and the National Board of Review. And now I'm posting it. It's kind of a dream come true, and I don't know how many of these we'll do, but take a look!

Posted by Walter L. Hollmann at 8:21 AM No comments:

Stand Up Guys? The Taylor Swift song from Hunger Games? Act of Valor? Guys, the only proper response to the HFPA is limitless adoration.

Your usual suspects, with two counting as original (Zero, Django), and three as adapted. Still think Silver Linings Playbook is weak in the script department, but I better get used to this.

Surprised that Hyde Park on Hudson can be considered a movie; especially depressing considering that Tommy Lee Jones' performance in Hope Springs goes unrecognized. Abandoned by SAG, the BFCA, and now the HFPA. Woe to the man who does not campaign for the pre-September release.

Arkin, Hoffman and Jones are definite locks at this point, but Globes switch it up a bit by nominating both DiCaprio and Waltz for Django. I'm surprised they didn't go for De Niro in Silver Linings, but they do love their Tarantino actors.

Emmanuelle Riva looking more and more like the outsider looking in...unless she winds up as the surprise nominee come January 10. Keira Knightley's incredible performance in Anna Karenina is officially KIA. If she can't get support from the Globes, there's no hope left. Glad for Cotillard, though. And how about that Rachel Weisz!

NICOLE KIDMAN. Oh my God, this is actually happening!

Yeah, I had a feeling Salmon Fishing would be their cup of tea, showing up both here and in Actor. Dench, Lawrence and Streep were givens, but I see they made up to Smith for not nominating her in Supporting Actress. She actually is delightful in Quartet, but Hoffman (or his editor or someone) chose to cut away from a lot of her beats, undercutting some of her performance.

It's official -- the HFPA likes The Master more than SAG.

Well, of course the best-directed films must be the dramas! Held out hope for a nod for Wes Anderson, but screenplay was already crowded and he was a longshot for director. No nod for Tom Hooper, either, which is a surprise considering Les Miserables was the supposed front-runner a week ago.

I'm grateful for Dench, Cotillard, Team Lincoln, Moonrise Kingdom and Nicole Kidman. I'm burning a candle for Anna Karenina and Cloud Atlas, two masterpieces that are more than their scores (not to look that gift horse in the mouth, though: deserved noms, both).

The Screen Actors Guild nominees arrived this morning at (roughly) 5:55AM, PST. I had an alarm set and everything, almost falling back asleep with the thought, "Eh, it's just the Globes, I'll read everyone's take later." Which is wrong in many ways. What kind of monster would choose to sleep during the Globe nominees? Had I already forgotten last year, when announcer Woody Harrelson objected to Rampart's complete absence, and when Sofia Vergara Charo'd out with her pronunciation of Scorsese's name (Ma-reen Scor-sez)?

Not that that matters, because that's tomorrow. What matters is this: SCREEN ACTORS GUILD nominees!

SURPRISE!: Bardem gets in for his Bond villain, the first time the franchise has been honored by any of the major guilds (WGA, DGA, PGA, SAG).

HOORAY: Bardem obviously, but even though they're pretty much locks, I'm always rooting for Hoffman and Jones in their respective films. I didn't care much for The Master, but I think Hoffman does a magnificent job of presenting the subtle manipulations and irrepressible charm of Lancaster Dodd, as well as the little weaknesses that weaken his own fortitude. 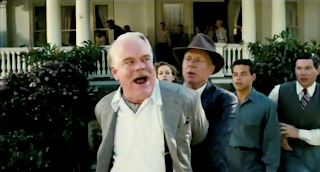 As for Jones in Lincoln: bad-ass. (You saw the Cinemaniacs review of Lincoln, right?)

MIA: Leonardo DiCaprio (Django Unchained); I blame the late arrival of the film, since Tarantino's flicks usually pick up some steam at these things

SURPRISE!: Kidman gets in for her white trash sexed-up Barbie doll in Lee Daniels' dark, camp thriller The Paperboy.

HOORAY: SAG gave out pleasant surprises higgledy-piggledy this year: Kidman gave one of the strongest performances of the year (even if it isn't, in my mind, a supporting one). Also appreciate the continued love for Hunt's work in The Sessions, though hers is not a supporting performance either.

SURPRISE!: None. For me, anyway. I know others were expecting Joaquin Phoenix in The Master, but I sure as hell wasn't.

SURPRISE!: This goes into MIA as well, but the absence of both Emmanuelle Riva and Jean-Louis Trintignant for Amour surprised many today. I'm assuming that they weren't eligible, or at least unseen by the members of the nominating committee. Mirren and Watts making it in raised my eyebrows.

HOORAY: Argo, Best Exotic, Lincoln and Silver Linings all boasted superlative casts with great chemistry; in some cases, they saved the movie (but you've seen the Cinemaniacs reviews of Silver Linings Playbook, right?). I haven't seen Les Mis, so only time will tell.

MIA: Strong ensemble work this year - Moonrise Kingdom, Magic Mike, Damsels in Distress, The Sessions, The Paperboy, and Cloud Atlas all deserved nods here, but I wouldn't know which of them to choose and which of these solid nominees to replace.
Posted by Walter L. Hollmann at 11:42 PM No comments:

As you can see, things are a little different over at the Silver Screening Room.

It begins, of course, with the new design and layout, courtesy of good friend and Ruin the Internet performer/writer/editor Chris Amick (he's the one with glasses, some scruff, soothing voice). And it is GORGEOUS!

It further develops with what you see in the post below: good friend and Ruin the Internet performer/writer Ben Mekler (the one with no glasses, scruff) and myself have an online review show with BiteSize Network, CINEMANIACS. I can post the videos up here as well, as I did on Halloween, but y'all should also check us out on the main page (follow the above link).

FINALLY, the Awards Season is upon us, which means we are ever closer to the Oscars, which means CASTING COUP MONTH returns! Last year, 'twas but a week of celebration, but I'm hoping to go back to a full month of re-imagining Oscar-winning films with a modern ensemble.
Posted by Walter L. Hollmann at 1:34 AM No comments: