After I hated the first draft and the computer froze during the second draft, I feel like I should give up on my grand Femme Fatale Review, a look at the films Sucker Punch, Cat Run and Hanna. I always hope that I'm going to finally write a review that's a little more critical, a wee meaningful, with insight into social implications and reflections on the world at large. Alas, the Fates conspire against me, and only want me to express feelings on a Cold Stone Creamery level.


Admittedly, this is probably for the best, since I really have no idea what to say about these films that goes beyond gut reactions. I know that Sucker Punch's strength lies in its overcoming the exploitation of its protagonists by allowing them to take control using the very shackles (or fetish wear) that bind them. I know that Cat Run's weakness lies in a heroine that does nothing but run around in a form-fitting outfit, a hero that's a pretentious douchebag, and a black sidekick so painfully stereotypical he makes JJ Walker look like Huey Newton. I also know that Hanna is just fucking cool, with a neat fairy tale mystique complementing an arty late 60s/early 70s-esque aesthetic. But that's all the meaningful thought I've managed to muster for the films, which is a shame; these films have more going on, it seems to me, than I give justice to.

Ok, maybe not Cat Run. That movie has very little to offer besides Janet McTeer as a prim and proper English assassin. The rest of the film is a chore to sit through. My chief complaint: what a misleading poster, a silhouetted woman (Paz Vega's titular heroine) running with a gun. I don't remember Cat ever doing anything with a gun. I think she tries to threaten Janet McTeer with one at some point, but McTeer ain't playing that game. No, Cat stays true to the title, never doing anything except running, looking shocked, and falling in ridiculous love with Scott Mechlowicz's douchebag hero. I am wary of any "hero" having a high I.Q., culinary skills, a humble nature, a desire to live in Eastern Europe, and the observational skills to say things like, "She has a bruise on her thumb, the same my sister had when she would let her baby teethe on her thumb, so this woman has an infant that's not with her." Yeah, way to notice a detail like that on a woman dashing through your restaurant.


Good thing they managed to balance it out by having a sidekick who just wants to get laid and make HILARIOUS references to pop/dance/rap songs -- at one point, while observing an ejaculatory stain (yes), he says, "To the window, to the wall." THANK YOU BLACK MAN CONTINUE TO BE WACKY WHILE THE WHITE PEOPLE HANDLE EVERYTHING. I guess the filmmaker thought the presence of D.L. Hughley as an independent war veteran missing both legs and an arm was progressive enough? God. This movie.

Now, if you want a great on-the-run movie featuring a real femme fatale, look no further than Hanna. Saoirse Ronan rightfully described her performance as "feral", but there's also an innocence and naivete in the role. Really, I went into the film knowing very little about it -- I knew that her father trained her to be an assassin, and Cate Blanchett has a Southern accent and red hair. Oh, heavens, that's all surface level, and part of that is inaccurate anyway. Hanna's venturing out into the "real world" after years of isolation present her with more complications than CIA-paid assassins and Blanchett's weirdly sexy performance. This girl has never experienced electricity, music, the hustle and bustle of the city. No wonder the sound design is so precise!


I sometimes feel that a young actress's first Oscar nomination, more often than not, is as far as she will go; with Ronan, I trust that I am very, very wrong. That girl commands every moment she appears on screen, expertly balancing the little girl growing up with the deadly killer. The movie is book-ended by the same line of dialogue in different circumstances, and Ronan left me breathless both times. Her performance overwhelms as much as the Chemical Brothers' score, one that is set to repeat on my iTunes, one that I catch myself constantly humming. And the costumes and the production design, and Blanchett and Bana and Tom Hollander as a jumpsuit-wearing, peroxide-blond assassin....oh, Hanna, you kill me.


To a lesser degree am I slain by Sucker Punch, but I cop to loving that film as well. I like the play between the female ensemble -- jaded Sweet Pea (Hollmann Award Nominee Abbie Cornish), still dreamy Rocket (Jena Malone), weak Blondie (Vanessa Hudgens, proving herself with each new film to be growing as a performer), stubborn and desperate Baby Doll (Emily Browning), and Amber (Jamie Chung). Amber's kind of...just there. I like the conceit of a girl locked up in an asylum by an evil stepfather fantasizing that she's an orphan sold to a brothel by an evil priest who fantasizes that she is a member of an all-girl team of warriors battling dragons, orcs and steampunk zombies (I swear to God, the next person who calls them steampunk Nazis gets a knock from me -- they reference the Kaiser, there are WWI trenches, uniforms...German =/= Nazi).

I'm down with making your own reality, self-sacrifice, sisterhood, and gunning down samurai rock monsters. I love the use of music throughout, with Baby Doll singing off-screen and new versions of songs like "White Rabbit" underscoring her fantasies. Besides, the fantasies are supposed to be taking place while she dances, so it's only right to have the music take over -- the greatest use of this is in the "Tomorrow Never Knows"/Kitchen Knife segment, featuring an old-timey radio and robots. It excited me, moved me almost to tears. I don't know how well the film will play on the small-screen, but when I sat in that theater, I was impressed.


So there you have it, late as can be, but here, here, here! Have y'all gotten a chance to see any of these yet? Tell me I have some fellow Sucker Punch fans out there.
Posted by Walter L. Hollmann at 10:46 AM 2 comments:

It's now time for that foolish, dumb, silly game of trying to predict Oscar nominees for the next season in April. A true Russian roulette, if ever there was one...besides the one that already exists. I've decided to predict screenplay categories as well this year, and I was almost tempted to do cinematography, but nobody knows that shit sight unseen. Come on. Let's be real.

Now, why do I do these in April? Because every April, Nathaniel at The Film Experience does it, ending it with the Actress Psychic Contest. If you can guess the five Best Actress nominees this far in advance, you get a capital p Prize! EEEEE! I got 3/5 last year, correctly predicting Bening, Kidman and Lawrence; I had Naomi Watts (Fair Game) and Robin Wright (The Conspirator) in my other two slots. But that was then, this is now, so let's roll on. 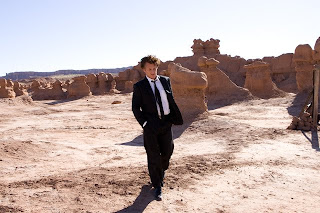 Albert Nobbs
A Dangerous Method
The Ides of March
The Iron Lady
J. Edgar
My Week with Marilyn
Super 8
Tinker, Tailor, Soldier, Spy
The Tree of Life
The War Horse

Oh, sure, J. Edgar is slated for 2012, but if I'm right about Mr. Eastwood, that movie will be in cineplexes by late December with three National Board of Review awards under its belt.

Last year: 4/10 - The Fighter, Inception, The Kids Are All Right, The King's Speech 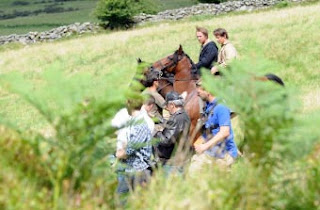 I predict Cronenberg will get that finally-recognized-auteur slot, joining Curtis as a first-time nominee. Eastwood works his magic after a few years' absence -- though expect Clooney as a possible spoiler. Spielberg gets in because there's no way he won't go justice to the source material (good stuff), and Malick may be the one to beat! He said without having seen a thing.
Last year: 1/5 - Tom Hooper, The King's Speech 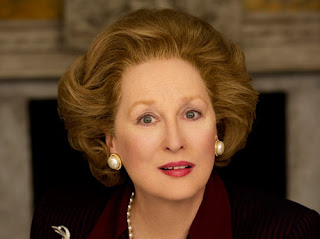 Close is welcomed back into the fold, Streep and Williams get biopic nods, Olsen is the indie slot, Hathaway gets the second nomination needed in order to clinch the Overdue! status sure to come when her Judy Garland biopic hits in 2013 (or thereabouts).
Last year: 3/5 - Annette Bening, The Kids Are All Right; Nicole Kidman, Rabbit Hole; Jennifer Lawrence, Winter's Bone 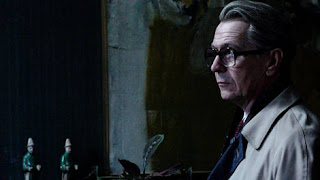 Fassbender's packed year is sure to get him some recognition, and hopefully Oldman's turn as a legendary literary figure will net him his first nomination. Gosling will finally get a second nomination, right? He does great work every year, and every year....
Last year: 1/5 - Colin Firth, The King's Speech 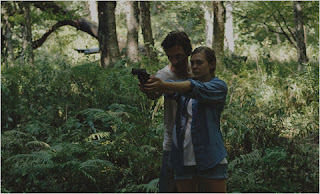 I am convinced in my head that leading man Redmayne will be pushed to supporting to (a) increase his chances of getting a nomination, and (b) increase Williams' chances of getting the gold. Mullan's character, that of the drunken father, is one of the best characters in War Horse, and he's also due for recognition. I'm predicting Hawkes to be this year's Jeremy Renner ("Whoa! Back so soon?"). And then there's also Mortensen and Plummer. I'm least confident about this lineup.
Last year: 2/5 - Christian Bale, The Fighter; Geoffrey Rush, The King's Speech 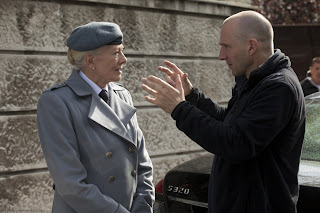 I'm equally confident in this lineup. I wasn't going to predict Chastain, since no actor has ever been nominated for a Malick film, but in the end I thought, "To hell with it."
Last year: 3/5 - Amy Adams, The Fighter; Helena Bonham-Carter, The King's Speech; Melissa Leo, The Fighter 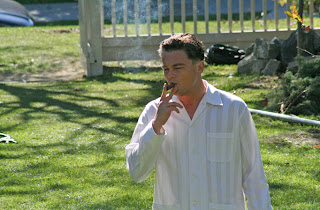 McCarthy finally gets accepted into the club, Cody and Black get welcome back hugs, Durkin fills that indie slot, Malick wins. 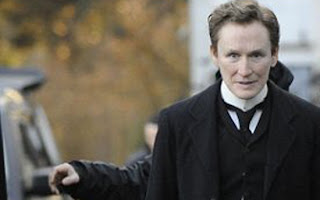