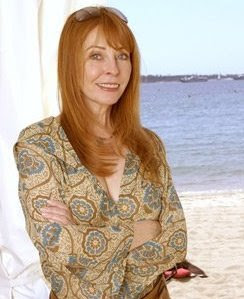 Today is Cassandra Peterson's 57th birthday. Cool people will know who that is without me having to do the BIG REVEAL. But the BIG REVEAL is also pretty sexy, so.... 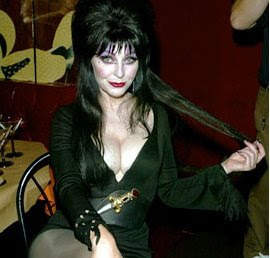 You Don't Own Me

Every time I watch this, I just get so excited and happy and wonderful that I just want to go out and show everybody what I'm made of!

Then I remember that I'm a guy, and if I want the world's respect, doing Bette Midler impressions in the streets is not the way to go.

Still, the musical version of The First Wives Club is finally officially happening. Do you think this song will make an appearance? I certainly hope so.
Posted by Walter L. Hollmann at 9:27 AM 2 comments:

Vicky (Rebecca Hall) is a gal with a plan for her life: study in Spain, then return to New York to marry her dependable, milquetoast fiance (Chris Messina), live modestly and happily. Cristina (Scarlett Johansson) is a spontaneous girl who never knows what she wants, just what she doesn't want. What she doesn't want this time around is to miss out on a fascinating life with painter Juan Antonio (Javier Bardem). But life with this master seducer of women (he tries it on both girls) means life with his sexy, unhinged ex-wife Maria Elena (Penelope Cruz). And there's the set-up. Most of which is provided for us by a narrator.

Can I say that this is Woody's best work of the decade? It hits all the right notes without being as suffocatingly depressing as Match Point, and only lightly touches on the screwball aspects of Scoop. His last effort to combine drama and comedy in a love story, Melinda and Melinda was almost unwatchable for me; this, however, is a masterpiece.

Yes, the narrator tells us many things that we could see happen instead. But it worked for me, as it made the film more of an examination of passion and of the choices we make, rather than a straight-up drama about Continental neurotics. This and the menage a trois theme reminded me of Jules et Jim, clearly a large influence on this narrative. We get Juan Antonio/Vicky/Cristina, Juan Antonio/Cristina/Maria Elena, Vicky/Juan Antonio/Doug, and so on.

The acting is great. Scarlett Johansson does her usual bit here. You know, as much as I like her, she really is a limited actress. She does what she needs to do, but it's not as impressive as her co-stars' efforts. Javier Bardem is the most natural, instantly charming as the artiste with a rather fatalistic view of life. Penelope Cruz absolutely sizzles when she's on the screen, and as much as I loved Volver, I think this may be my favorite role of hers to date. Rebecca Hall is a solid Vicky; her arc is perhaps the most interesting, as it is one of sexual awakening. In a roomful of crazies, she's the one with a head on her shoulders, though maybe not quite as secure as she hopes.

And Patricia Clarkson, who only appears in, like, six scenes, manages to give the best performance in the film with one heartbreaking scene halfway through. Those hands, that face - they tell us a whole history, a tale of disappointment, of dreams deferred and hope all but gone. An incredible performance, truly, marking another Clarkson great for 2008.

OK, let me put it this way: my second favorite movie of all time is Everyone Says I Love You, Woody Allen's 1996 musical that also dealt with love, threes, and narrators. And I will go so far as to declare that Vicky Cristina Barcelona is his best film since then. Sure, it has some flaws, but my GOD! that is still one bitchin' final product! ***3/4
Posted by Walter L. Hollmann at 12:54 AM No comments:

A friend of mine led me to this story from Empire, about a new vigilante movie in the works.

This vigilante film co-stars Emily Mortimer, the amazing actress from such gems as Lars and the Real Girl, David Mamet's Redbelt, and Scream 3. Matthew Vaughn, he who directed Stardust last year, is producing (is he directing as well? I don't know).

Anyway, the real story here is the star. You see, the movie is called Harry Brown. And playing the ass-kicking, name-taking titular hero is none other than.... 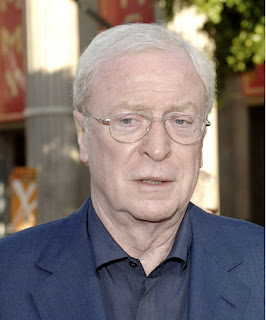 The film sees him avenging the murder of his best friend. No word yet on who that'll be, but I'm just thinking how awesome it would be if Peter O'Toole, who Michael Caine once understudied, was in this movie too. Holy shit, that would be insane.
Posted by Walter L. Hollmann at 1:21 PM No comments:

I like how much freedom we get with these weekend projects. Sure, we only get to do 60-second, single-shot compositions, but everything else is fair game.

For instance, last week I did a film about someone losing toilet paper. This week, I did one about a girl strapping a guy to a chair, taking off his shirt, and stealing his wallet. Last week's turned out pretty well; this week's was a challenge, but hopefully editing will take care of everything.

This is a pretty game group I'm working with. Chris and Rebeca worked outside lights, and got destroyed by skeeters in the process. Stef managed the lights and stayed with me through choosing angles and shots. And Datev, sweet, unassuming Datev, agreed to play the Vixen.

Great experience. I wish I had my own DVDs of these projects. I hope I can get or make a copy somehow, but I understand the ones we submit stay with the Film School. Some pictures were taken of the last one, so maybe I can get those.

Editing's a bitch, though.
Posted by Walter L. Hollmann at 7:32 PM No comments:

The amazing trailer for Milk, a biopic depicting the rise of the first openly gay elected official, San Francisco City Supervisor Harvey Milk. This just looks incredible, and I can't wait for it to come out. Better quality trailer here.
Posted by Walter L. Hollmann at 1:42 PM 1 comment: