Oscars 2021 Predictions: Who Will Win?

It's what it says on the box! Starting with the categories where I haven't seen all the nominees...

Best Animated Short: "Robin Robin" (though look for "Bestia" to possibly spoil)
Best Documentary Short: "The Queen of Basketball"
Best Live Action Short: "The Long Goodbye"
Best Animated Feature: Encanto (it's peaking at the right time and has love outside this category)
Best Documentary Feature: Summer of Soul (or, when the revolution could not be televised)
Best International Feature: Drive My Car (tho' The Worst Person in the World is probably not far behind in votes, Drive My Car is a Best Picture/Director/Adapted Screenplay nominee, so there's a lot of love for it - this seems to be the most logical place to award it)
Best Costume Design: Cruella
And moving on to the ones I have seen...after the jump. 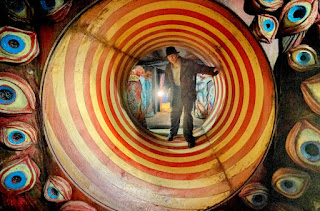 Best Visual Effects: Dune (should win, will win, no arguments, the scale is impressive and the execution seamless)
Best Sound: Dune (should win, will win, the nominee that impresses both in the sound editing and sound mixing disciplines; the sound and the vfx are the movie)
Best Makeup and Hairstyling: The Eyes of Tammy Faye (biopic transformations have cleaned up in this category lately - see also Bombshell, Darkest Hour, Vice - but look for a possible spoiler in Dune)
Best Editing: tick, tick...BOOM! (truly think its win at the Editors' Guild Awards meant something, and those musical numbers make a great showcase for the work; Dune should win, though)
Best Production Design: Nightmare Alley (I honestly think Dune's minimalism will work against it, ditto The Tragedy of Macbeth; Nightmare Alley's sets are gob-smacking, a perfectly realized depiction of Depression-era squalor and splendor. It deserves the win)
Best Cinematography: The Power of the Dog (I don't think it's going home with only one award, this one makes the most sense to me as its other win)
Best Original Song: "Dos Oruguitas" from Encanto (since they can't give it to "We Don't Talk About Bruno" ... I can't see three Bond songs in a row, and the Beyonce and Reba songs aren't particularly memorable. Possible spoiler is Van Morrison's "Down to Joy" from Belfast, which would be my personal pick) 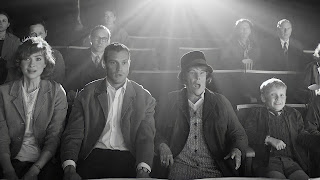 Best Score: Dune (it just makes sense, not just because of its unique sound but because it's also, of all the nominees, definitely the most score...it also happens to be the best in the category)
Best Adapted Screenplay: CODA
Best Original Screenplay: Belfast
Best Supporting Actress: Ariana DeBose, West Side Story
Best Supporting Actor: Troy Kotsur, CODA
Best Actor: Will Smith, King Richard
Best Actress: Jessica Chastain, The Eyes of Tammy Faye (hearing a lot of scuttlebutt - and anonymous Oscar voter interviews - make it seem like Penelope Cruz's to lose, but it feels odd that the only non-winner in the category wouldn't finally be given her laurels, especially considering how hard she's been pushing the film. Expect a The Iron Lady-style Makeup-Actress fête)
Best Director: Jane Campion, The Power of the Dog
Best Picture: Belfast
Egg on my face? We'll find out soon enough....
You May Also Enjoy:
ZergNet
Like us on Facebook
Posted by Walter L. Hollmann at 12:01 PM