I don't know what to write about Star Trek exactly. I know it wasn't the perfectest film ever made ever (I know that because it's not Nashville). But I also don't have any nitpickings. But I don't want to just go overboard with hyperbole. 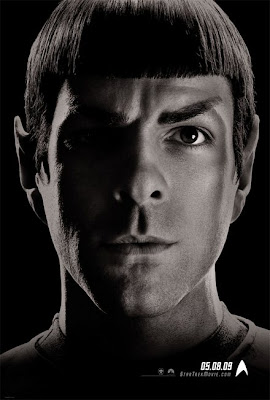 Suffice to say, it is first-rate as far as popcorn movies go. I mean, I was on the edge of my seat, gripping the armrests, half-rising as I scooted forward, as though that would enable me to get a better look (I did this with Speed Racer as well, and I think we all remember how much I loved that film). I mean, I actually stopped eating my Milk Duds so that I would have enough for the whole film. It was just that exciting.

Michael Giacchino once again delivers on all fronts. Much like his beautiful work with Speed Racer last year, he effortlessly integrates the original theme into his own score, creating a score that sent goosebumps down my arms. Oh, SilverScreeners, I wish I could say I was exaggerating, but there is just no exaggeration necessary when discussing the work of Michael Giacchino. He is amazing!

The plot, by the way, revolves around the "origin story" of the crew of the Enterprise from the original series, with the villain being a renegade Romulan named Captain Nero (an unrecognizable Eric Bana). That's all I'll say. I went in with a blank slate, so why shouldn't you? I will say this -- the way they explain away the differences between traditional continuity and this new one is, I think, pretty ingenious. Kudos, then, to screenwriters Alex Kurtzman and Roberto Orci.

The actors are clearly having serious fun, by which I mean they touch on camp while remaining sincere, much like the performances in Speed Racer. Chris Pine is a Captain Kirk I could get behind (not that way, though he definitely is a virile one). Zoe Saldana is a smoldering Uhura, the type of gal I'm most attracted to: well-proportioned, bad-ass, and the smartest one in the room. Dare I mention the applause my row gave every time Karl Urban appeared as Dr. McCoy? They would have been thunderous were it not for the rest of the people in the theater. Simon Pegg rocked, of course, as Scotty. And yes, Hollmann Award Winner Bruce Greenwood did cause us to high-five, if only because he is just so paternal and in control.

Zachary Quinto is the real shining jewel here. The Spock in this film is torn between his two sides: human and Vulcan. And Quinto sells this turmoil, this struggle to keep his emotions in check with regards to logic, even as Kirk disregards the latter and encourages the former. I never watched much Star Trek as a kid (or as a teen, for that matter), but Spock was always my favorite. With Quinto, I feel even more justified. His performance is truly remarkable.

So, yeah, I have to say Mother's Day weekend is probably the best weekend for movies thus far. Speed Racer last year, Star Trek this year. What will Giacchino give us in 2010?
Posted by Walter L. Hollmann at 9:29 PM