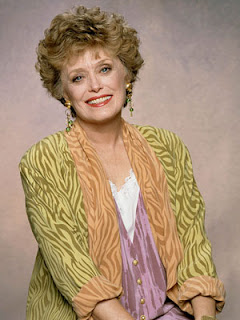 Rue McClanahan passed away at 1 a.m. this morning after a stroke. She was 76.

When I read earlier this year about her being hospitalized after "a minor stroke", I prepared myself for this. But the news is still tragic, and as corny as it sounds...it pains me to hear this. It was only recently that I had begun to appreciate her non-Blanche work: Nunsense, Maude, numerous guest spots on television shows, supporting roles in feature films, and -- most notably -- the blind, burnt biology teacher in Starship Troopers. She was a funny woman, a class act, immensely talented. She will be sorely missed.
Posted by Walter L. Hollmann at 10:09 AM

She was a class act and a funny lady. I'll miss her too. Very nice tribute, Walter.

Oh man, that was her in starship troopers?? Talk about stretching her talent. Sad news indeed, but I guess it had to be someone. And part of me's glad it wasn't Gary Busey.