Not Just For Colored Girls

I know Rotten Tomatoes is imperfect system, but it still seems absurd to me that For Colored Girls is at a 33% "Rotten" rating. Tyler Perry turns in his most mature, subtle, courageous, beautiful work to date, and people are going to smack it with a one-star rating? Surely there's some bias and denial at work here, for I went to see For Colored Girls this evening with a Tyler Perry hater -- I mean teeth-gnashing, head-smacking HATER -- who loved what he saw. Me, I don't hate Tyler Perry, so perhaps I have a different bias, but I also loved what I saw. 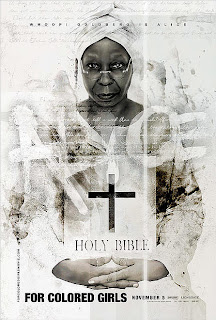 For Colored Girls is, of course, based on Ntozake Shange's for colored girls who have considered suicide/when the rainbow is enuf, a collection of 20 choreopoems to be performed by seven women, all identified by a color. Tyler Perry writes much of his own material for the film, but incorporates the poems sometimes powerfully, sometimes out-of-place. Tessa Thompson's "graduation nite", for example, comes out of nowhere, with no one reacting to it. It's a long monologue set beautifully to some dance exercises, but the overall feel of the scene is off; it's a recitation. Compare that to her later "abortion cycle #1": her performance is natural, unforced, beautiful. The transition between Perry's dialogue and Shange's is fluid here, whereas in "graduation nite" the leap from one to the other is alarming.

That was always going to be the challenge. Shange's masterpiece is an abstract theatre piece, relying on dance and poetry, with the Ladies sometimes interrupting each other, taking over a verse, finishing a thought. Her poems are not always direct, but they are consistently moving. Perry, known primarily for his Madea films, is generally unsubtle and inconsistent, his broad comedy usually peppered with alarmingly melodramatic treatment of serious issues (the incest/rape dialogue in Madea's Family Reunion is a perfect example of this).

That he makes it work as well as he does is impressive. This isn't faint praise either, for Perry has upped his game considerably. Most of the poems do work with the rest of the film, and exposure to such complicated material has clearly done some good. In a typical Tyler Perry film, morality is black and white, the villains twisting their wicked mustaches as the damsel in distress waits for a man to save her from her plight. In For Colored Girls, there are no such clear divisions. One need look no further than the powerhouse scene between Thandie Newton and Whoopi Goldberg for evidence. Even Janet Jackson's two-timing husband is sympathetically, almost tragically, portrayed by Omari Hardwick. Jackson is fine, too, and her performance of "sorry" is layered and heartfelt. It's too bad she and Hardwick are saddled with the weakest  and least interesting storyline. 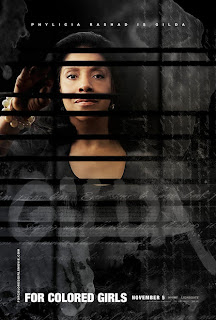 Let it not be assumed that this is merely a good movie for Tyler Perry; it's a great movie, period. Flawed, but fantastic. Perry never loses sight of the connection and sisterhood between these women. He even remembers to bring them together, as the play so often did, in dance: the film opens with Anika Noni Rose's ballet and closes with a party. The final shot of the ladies in their "layin' on of hands" is effective, and it is not clear that everyone will be okay. The layers each actress puts into this final moment is incredible.

Indeed, if one is to commend the film for anything, it is the performances: Phylicia Rashad, Whoopi Goldberg, Thandie Newton, Kimberly Elise, Macy Gray, Anika Noni Rose and Loretta Devine are unforgettable. Rashad and Devine have several poems apiece, and they are the most natural and entertaining of the actresses to watch. Certainly, every time Devine showed up, my entire theater was overjoyed. Goldberg is unhinged, delivering her most un-Whoopi'd performance in ages. She's frightening and pitiful, but the aforementioned scene with Newton adds so much to both characters. Newton, an actress I usually cannot stand, is sexy and angry, and though she just about straddles the line between camp and believable hysteria...she maintains a balance. Gray's cameo as a back-alley abortionist is creepy and genuine; her "i used to live in the world" is one of the stand-outs. Rose is beautiful, as always, but also vulnerable as the dance teacher raped by a man she trusts. And Kimberly Elise? Astonishing. She will break your heart and uplift it. 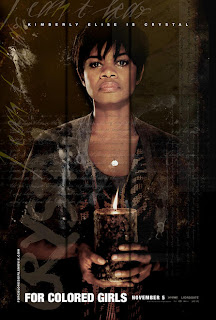 But again, it's not perfect. The journey to the back-alley abortionist is almost silly: gamblers, junkies, drug dealers, and a pit bull all congregate outside, played to the rafters by pantomiming actors in close-up. Truly a bizarre moment. The decision to intercut a rape scene with an opera is interesting, but the staging of the latter takes away the impact of the former; it also goes on for way too long. Jackson's character is underwritten, Thompson is inconsistent (though promising), and Kerry Washington is both. The editing is sometimes too abrupt. And while I usually commend a director for holding on a performance, Jackson's "sorry" monologue goes on for about three minutes without so much as a push-in. I admit, I started zoning out in the middle of it. Where utilized, the special effects are, shall we say, unpolished. This is no small matter, as it very nearly kills "a nite with beau willie brown", arguably the most important sequence in the film.

But then I come back to the score by Aaron Zigman, the costumes by Johnetta Boone, the production design and art direction of Ina Mayhew and Roswell Hamrick, the performances by Rashad and Goldberg, Devine and Elise. I come back to it all and think, "Damn!" It may not be completely successful in its attempt to bring Ntozake Shange's work to the screen, it certainly does the play justice. 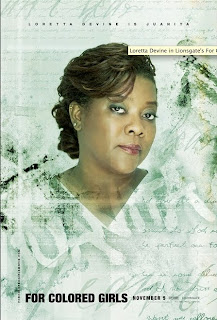 Great review. I'm interested in seeing this because I generally like Perry even though his talent - which he has despite the dissenters - seems decidedly theatrical, which is not an insult just a judgement (I hate when people say theatrical like it's bad).

I'm particularly glad at the praise for Anika Noni Rose, I love her (even if her brilliant work in Dreamgirls is all I've seen) and so glad to see Whoopi back on the big screen - it's about time.

And on RT: I have no faith in them.

Hey Walter, nice review, detailed, personal with great attention to detail. I have to agree with you about Rotten Tomatoes and even Metacritic (Have you heard of them) basically another aggregator of reviews from critics, aficionados, fans, and the general public. I mean you have to take it all with a grain of salt. I’ve seen films I enjoyed, didn’t love but enjoyed, receive low numbers across the board so what does that really say? About as much as people who write one paragraph reviews (no hate to those writers, that’s their thing, that’s how they approach reviews, just not my thing and apparently not yours) that never quite get beyond I liked it or I didn’t like it oh and there was some explosions and a dragon.

Perry receives the criticism he does because he often works with archetypes, many characters based on real people he knew growing up, but whenever you’re working with a broad brush you’re going to insult some. I think a lot of people don’t realize that Perry is one of the most prolific and successful filmmaker working today. In a lot of ways I think of him as a black Woody Allen – immeasurably talented, prolific, and unapologetic about their work. I’ve seen Mr. Perry in interviews and he’s an extremely smart guy – he knows what he’s doing and why, he never lets the detractors get in his way.

I haven’t seen this film yet but it is on my list. You don’t have to like Perry’s films but you can’t deny his talent nor his passion – though folks do all the time.

I especially like your line, “flawed but fantastic”. Every film in my personal collection fits that bill but they are supposed to be, just like any art must do for if it truly reflects life then we know how imperfect it must be. And I think you’re right about the translation from theater to film, from lyrical poetry and long, beautiful monologues that we tend to associate with the theater experience but films are about as much that we bring to them as they share with us.

Cheers->
As always, please drop by my blog and say hello
rory

"many characters based on real people he knew growing up"

That's what I love! I went to predominately-black churches for eighteen years, so characters played by Alfre Woodard, Cicely Tyson, Tamela Mann, or Tyler Perry remind me of home. Perry's critics are either unaware of or choose to ignore that there is a segment of the population that Perry's films capture, and that segment is called My Mother's Friends.

And thanks for stopping by!

I really enjoyed the monologue she delivered to her sister...the one where she goes "how are we still alive."

The material itself was weak, but that didn't stop her from taking it to the next level....