It's time to play catch-up! Short and shallow looks at the cinema I've been exposed to this past couple of weeks.

SAW VII 3D
Look, either you drink the Saw Kool-Aid or you don't. I've seen every one on opening day since Saw II. I probably would have enjoyed Saw 3D even more if it wasn't in 3D. Except for one shot at the end, the 3D is never put to use; maybe Step Up 3D spoiled me. In Saw terms, though, the movie delivers. Is it as good as Saws II and VI? No, but it's not as disappointing as Saws IV and V, either. A satisfying end to the series, though I would be more than happy to see it continue with what it sets up in the climax. But hey, if you were going to see this movie, you would have already.

RED
Helen Mirren is dead sexy here, and her scenes with Brian Cox absolutely delighted me. The chemistry between the two is the best part of the movie, for me. Why haven't they done more together? John Malkovich is a hoot, the action sequences are suitably exciting/appalling. A fun time. The score is waaayy too loud, though, clobbering you over the head with its insistence on HOW MUCH FUN the film is. The plot/plot twist/villains are all...uninteresting, even if it's amusing to see Dreyfuss as a villainous arms dealer. Morgan Freeman actually pulls his Invictus performance out of his ass for one scene, making that Oscar nomination all the more dubious. And I've never been so disappointed in Mary-Louise Parker. Throwaway fun, though Mirren, Malkovich and Cox are rather good.

LEGEND OF THE GUARDIANS: THE OWLS OF GA'HOOLE
Man, I love Zack Snyder. All I knew going in was that this was an owl movie. But owls with little owl daggers and owl Nazis and Geoffrey Rush as a crazed warrior? Nice surprises! In terms of children's films, this is more The Black Cauldron or The Secret of NIMH than, say, Bambi. The animation is spectacular, each feather, each drop of water lovingly rendered so as to seem almost live-action. It's an exciting film with great 3D (flying and dancing: that's what 3D's for, apparently) and scary voice performances from Helen Mirren and Joel Edgerton. Mind, I couldn't get completely involved emotionally (they're just owls, really), but I appreciate the technical marvel, and my own personal hangups don't really reflect the quality of the film itself. My legitimate complaints: the Owl City song in the middle is from a completely different film; and the poorly-written/annoyingly-performed heroine, Gylfie. Blechh. 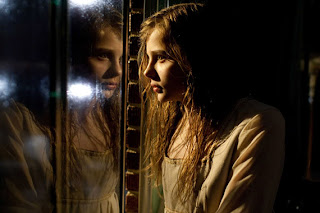 LET ME IN
At times a shot-for-shot repeat of Let the Right One In, at other times a truly original take on the story. Kodi Smit-McPhee and Chloe Grace Moretz are fine, for the most part, especially Moretz. Smit-McPhee, I fear, may have been directed to undersell a few too many scenes, so that while much of his performance is still great, there's also a significant amount of blank expressions that tell me...nothing. Obscuring the face of his mother would be interesting if it wasn't so conspicuous. There's a shot where they linger on the back of Smit-McPhee's ear, his mother's blurry body in the background, for about ten seconds. That's long in movie-time. At other times, though, Greig Fraser's lighting and composition are breathtaking, so it's a toss-up. I find that with each great aspect comes a caveat: great score, except for the chorale sequences; great cinematography, except for the numerous out-of-focus shots that take me out; fine performances, except for the occasional deadpan, blank-faced acting on the children's part. I don't think that's them, I think that's director Matt Reeves. Still, he adds an extra dimension to Richard Jenkins' character, and Elias Koteas is quite effective in his small role. The VFX are distracting. I like it overall, but there are problems. Serious props, though, for the slow burn...even if the end feels rushed.
Posted by Walter L. Hollmann at 4:07 PM