Today, crowds are lining up to see the all-star extravaganza promising spectacular visuals, cheesy wit and endless entertainment. Those crowds are all based in Boca Raton and similar places. That's unfortunate, for The Best Exotic Marigold Hotel is a cinematic bonbon well worth the time of any Judi Dench/Maggie Smith fan.

Those of you who have been too swept up in pre-Avengers hoopla, or missed my Top 25 Most Anticipated, perhaps you've missed hearing about Best Exotic. Based on Deborah Moggach's These Foolish Things, the film follows a handful of elderly Brits who retire to India, enticed by the promise of an exotic paradise; as it turns out, the hotel is a run-down heirloom on the brink of foreclosure managed by well-meaning yet scatter-brained Dev Patel. Our ensemble elects to stay anyway, each for a different purpose, and for the next two hours we are treated to their individual stories of sex, death, and everything in between. 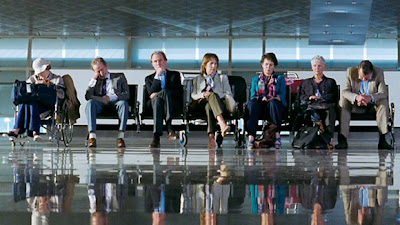 If the film has a lead, it's Judi Dench, playing the recently-widowed, newly-christened blogger who, after years living behind a husband she loved but never really understood, is ready to find herself. Watch as she goes in search of employment! Listen as she narrates with platitudinous observations on daily life! Marvel at her radiance as she girlishly enters into a romance! It's rare enough that Dench gets to display such vulnerability; that it's the most sparklingly beautiful she's ever looked on-screen is a double-treat.

On the same train are Tom Wilkinson and Bill Nighy. Wilkinson, a terrific actor who all too often is cast as the Uptight Ham Berating People While Wearing a Suit (The Ghost Writer, The Debt, Recount, The Kennedys), plays a retired lawyer who comes to India to revisit the past. It's a moving subplot anchored by Wilkinson's subtly conveyed sense of loss and love. Nighy also gets to play against type, as a married man who has fallen out of step with his wife of forever, finding himself attracted to the warmer Judi Dench.

Rounding out the cast are Celia Imrie and Ronald Pickup as two randy retirees looking for lust; Penelope Wilton as Nighy's uptight wife; and Academy Award winning superstar Maggie Smith as a kind-of racist former housekeeper forced to come to India for surgery. It's a small role, requiring Smith to do little more than do some trademark Smithisms: a tart line here, a look of disapproval there. But Smith is one of the greats, so when the film asks more of the character, she delivers: In a monologue about how she was forced into retirement; in her scared face as she first arrives; in her final scene. They are mere hints at what she's capable of.

Poor Wilton doesn't get any such opportunities. The script has decided she's a bitch, so bitch she will remain. Not that the character is pleasant to be around at all, but it's not necessary to crucify people for wanting to maintain the lifestyle they're accustomed to. In Titanic, Frances Fisher delivers a marvelous mini-speech about the importance of Rose marrying well, and while we may initially scoff at her horror of having to become a seamstress to make ends meet, the film does an admirable job of making us appreciate the humiliation and difficulty of such a drastic change. Because, really, I couldn't do it if my life depended on it, so why should I expect Ruth to? Best Exotic has no such mercy, and so Wilton is to be despised, pitied only because she can't appreciate the BEAUTY and WONDER of INDIA. After the depths explored in Wilkinson, Smith and Dench, to see a character given such two-dimensional treatment is a disappointment.

Otherwise, it's quite a good time. The art team must be commended on the titular lodgings. It's a perfect fixer-upper, full of both potential and thick dust. The IMDb does not, at present, list a costume designer, and that's a shame; between Judi Dench's frocks and Tom Wilkinson's suits, we've got a contender for Contemporary at the CDG Awards at year's end! Even Thomas Newman, whose music I find to be kind of samey, has composed an exotically hypnotic score that's distinct yet not distracting.

Overall? A delightful time, with a great performance from Dench.
Posted by Walter L. Hollmann at 8:06 PM

The treatment of Wilton was an annoyance, especially because I could see her trying HARD to make it work, but it was just too flatly drawn. Twas essentially pleasant otherwise, though, and lovely indeed it was seeing Judi play someone so sweet and vulnerable.