In time for Halloween, some stray thoughts on this year's horror offerings (so far).... 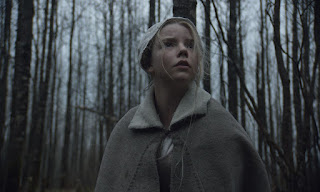 The Witch (dir. Robert Eggers) - Superb on every level, an instant classic. Strikes a neat compromise between how the past fewer the threat of witches and our present-day attitude toward such "hysteria" (or, just because you're paranoid doesn't mean they aren't out to get you!).

The Boy (dir. William Brent Bell) - Just a good time, with a genuinely shocking and nauseous twist - for me, anyway. And it had a great sense of humor about itself. I will say, though, modern horror flicks have a tendency to outstay their welcome, leaning on especially long climaxes.

Pride and Prejudice and Zombies (dir. Burr Steers) - It's fine, it's fine. Nothing to get worked up about either way.

10 Cloverfield Lane (dir. Dan Trachtenberg) - It does bank on a certain familiarity with its title, which drains some of the suspense from the proceedings. Dull when it should be claustrophobic. A thoroughly unenjoyable time - and this from a John Goodman and Mary Elizabeth Winstead fan!

The Wailing, Blair Witch, and more after the jump..... 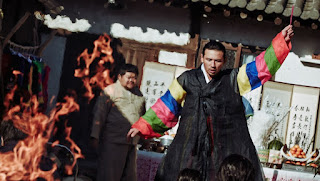 The Wailing (dir. Na Hong-jin) - Wicked, exhausting, brilliant. I spent a long time wrestling with how I felt about this film, only to realize that it was because it was so horrifying, so effective, so unsettling, it made me almost sick to think about it. Recommended!

The Neon Demon (dir. Nicolas Winding Refn) - It might be dumb, but that's forgivable when it looks and sounds this good. Plus Jena Malone shows you what commitment really means.

The Invitation (dir. Karyn Kusama) - Is it a spoiler to put this one here? A strong ensemble, a great sense of mood. Everything feels slightly off, but how much is real, and how much imagined? And oh so chillingly familiar if you've met enough people in Los Angeles...

Lights Out (dir. David F. Sandberg) - Pretty well done! I get the reservations re: the ending, but until that, an un-embarrassing B-pic.

Ghostbusters (dir. Paul Feig) - Genuinely funny moments sparsed throughout, but it's weird how cheap most everything looks, right?

Train to Busan (dir. Yeon Sang-ho) - Just when I thought I was over zombie tales, in comes this one. A beauty. 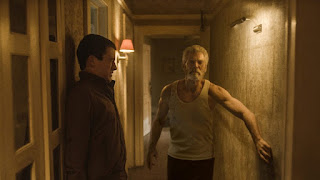 Don't Breathe (dir. Fede Alvarez) - Almost doesn't belong here - more of a thriller, really - but once they go deeper into the basement, it indeed gets horrifying. But it weirdly likes to tease that it's more extreme than it is? Also very loud.

Blair Witch (dir. Adam Wingard) - Where the original whispered, this one shrieks. But there are more than a few good scares to be had here. Count me as a fan of all the digital tech they use here, from mini-cams to drones, etc. Why? Because in the end, your modern marvels are powerless against ancient evil.

Desierto (dir. Jonas Cuaron) - Also a borderline inclusion - is it a thriller, is it a horror? - but here it is. Surprised with Jeffrey Dean Morgan's performance, and he fills in the details of a man we know literally nothing about. And this one doesn't take prisoners. 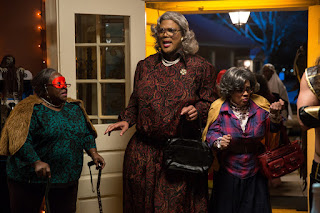