A little late, but still here: my top ten films of 2016. Hopefully this all comes out as much more than just word vomit under some movie titles. If it convinces any of you to get off the fence and see at least one of these, that is victory enough. 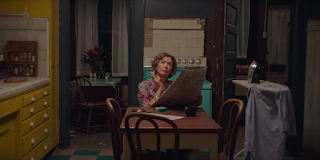 Dir/Scr: Mike Mills
Cin: Sean Porter
Is it weird to quote my Facebook status? Oh well. From December 31st: "Just saw a movie that made me so happy to be alive, grateful for the people I know and have known, excited for the experiences that are still to come, intrigued by uncertainty, and awed by Life. So yes, take this as a recommendation to see 20th Century Women."

Dir: Denzel Washington
Scr: August Wilson, based on his play
Cin: Charlotte Bruus Christensen
The part Denzel was born to play - immensely charismatic, deeply complicated, kind of an asshole, but he also makes sense. Every conversation is an opportunity for monologuing - whether it's a fanciful fight with the devil, heroic tales of standing up to the boss, or a self-pitying diatribe against the world. With such an overpowering central character, it's to the movie's credit that no one gets lost or sidelined - everyone, from Viola Davis to Stephen McKinley Henderson to Saniyya Sidney, is a fully realized human being.

Dir/Scr: Xu Haofeng, from his novel
Cin: Wang Tianlin
In pre-World War II China, a martial artist arrives in Tianjin in the hopes of opening a martial arts school teaching the Wing Chun fighting style; the already-established teachers don't like it one bit. And so begins almost two hours of double-crosses, street fights, ambiguous alliances, legacy, friendly enemies. Yet it is also about a changing China - dig the posh, European-style suits of the Grandmasters, looking down on the unpolished interloper and his peasant pupil, compromising the old values to consolidate power. I wish it had been three hours, truly.

Dir: Park Chan-wook
Scr: Jeong Seo-kyeong/Park Chan-wook, from the novel Fingersmith by Sarah Waters
Cin: Chung Chung-hoon
What a wacky movie! What a stunning movie! What a unique, oddball creation! Park and Jeong so seamlessly transfer the source novel's setting from Victorian London to Japanese-occupied Korea, you can't imagine it ever existed otherwise: the subtleties of language, the cultural particularities of certain literature, the significance of non-Korean influences as it pertains to status. The costumes, the sets, the locales! It's delicious.

The next five, after the jump...

Dir: Karyn Kusama
Scr: Phil Hay/Matt Manfredi
Cin: Bobby Shore
Everyone has their own way of dealing with personal tragedy - they also have their own ways of avoiding dealing with it. That's at the center of this grief drama wrapped within an uneasy, slow-burn thriller about the most open, warm, and therefore uncomfortable dinner party you've been to. One of the most brutal final shots in a movie this year. 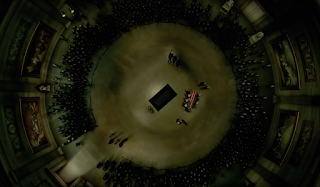 Dir: Pablo Larrain
Scr: Noah Oppenheim
Cin: Stéphane Fontaine
There's a lot going on with this movie, as it cuts between a conversation, an interview, a television special to assist in its main storyline: Jacqueline Kennedy's state of mind following the assassination of her husband. More than a portrait of grief - though if it was just that, it's my favorite film on that subject - it also looks at the way public figures carefully craft their personas. Jackie is precise, cautious, pulling no punches as she shapes an interviewer's article for her purposes. And thus a national mythology is cemented.

Kubo and the Two Strings

Dir: Travis Knight
Scr: Chris Butler/Marc Haimes, story by Haimes/Shannon Tindle
Cin: Frank Passingham
A beautiful film, and just when you think you have an idea of where it's going, it manages to surprise. Laika's visuals are always stunning, the attention to detail unsurpassed, but with Kubo, there's a simplicity, an influence of watercolors in the elements. And while it's not exactly novel to see a movie that celebrates storytelling, rarely have I seen it used as a means to forgiveness and mercy.

Dir: Martin Scorsese
Scr: Jay Cocks/Martin Scorsese, from the novel by Shusake Endo
Cin: Rodrigo Prieto
Asks all the complicated questions about faith, religion, mission work, colonialism, and gives no definite answer. But you'll find yourself siding with each character, often at the same time, usually within a single scene. It's a staggering work, both in terms of its technical prowess (Prieto!) and its emotional heft. In almost three hours of runtime, there is not a single extraneous or wasted moment.

Dir/Scr: Na Hong-jin
Cin: Hong Kyung-pyo
I did not know if I liked it or not for days after viewing, but realized it was because it had done what few horror movies actually achieve - it had genuinely unnerved me. There are no easy answers, there are no lessons to be learned. When the devil declares himself an angel and an angel accused of being the devil, who do you trust? Surreal, terrifying, a real nightmare of a movie. 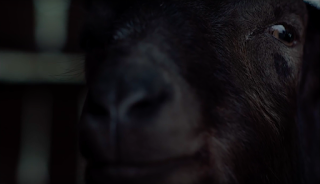 Dir/Scr: Robert Eggers
Cin: Jarin Blaschke
Witch stories. They can get under your skin with macabre tales of the supernatural, wherein the witches are real. Or they can be used to criticize society's need to scapegoat the other, using whatever excuse they can to purge what they don't understand, in which case the witch is nothing more than a figment of our imagination. The Witch manages to have it both ways, effectively, crafting a chilling horror tale about the true power of evil and paranoia.

Email ThisBlogThis!Share to TwitterShare to FacebookShare to Pinterest
Labels: 2016, 20th Century Women, Fences, Jackie, Kubo and the Two Strings, Silence, The Final Master, The Handmaiden, The Invitation, The Wailing, The Witch, Top Ten