A great many films to discuss.... 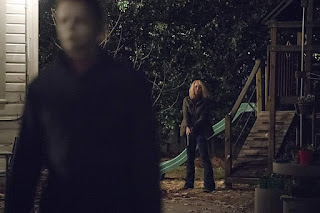 This Halloween fan was satisfied. In ignoring all but the first film in the series, the filmmakers both explore the trauma of Laurie Strode (Jamie Lee Curtis, both gutting and bad-ass), and how that trauma is dismissed, re-interpreted, or forgotten by the world's mythologizing of a serial killer and his crimes. As a fan of true crime podcasts and docs, it hit close to home. 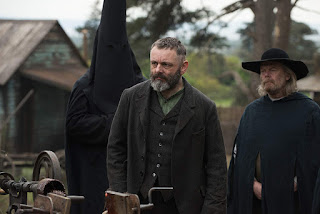 
Tedious, cliched, with a poor grasp of its own vague scenario. Dan Stevens is, frankly, awful.

An almost religious experience. Overwhelming in its ability to capture the claustrophobia of the spacecraft, the cacophony of its interior against the silence of space outside, the majesty of the heretofore unexplored. No over-explaining, no big speechifying (except, to a certain extent, by the missus), but an intimate study of a man's trauma, escape and humility. Reminded me of The Lost City of Z in many ways. Three cheers for the costumes, cinematography, sound design, and especially the score, which I've had on repeat since Saturday. 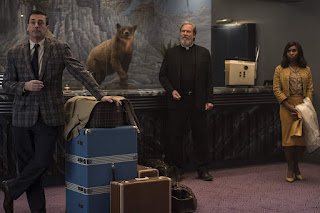 I've already seen comparisons to Tarantino, but I was reminded of John D. MacDonald classics like Murder in the Wind or The Beach Girls or All These Condemned or The Neon Jungle: a colorful cast of characters is assembled, their backstories explained in varying depth via vignettes, before crashing together in a violent, exciting third act. Thrilling, and great fun. 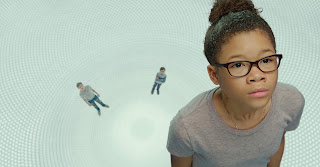 A Wrinkle in Time
dir: Ava DuVernay
scr: Jennifer Lee and Jeff Stockwell
adapted from: the novel by Madeleine L'Engle
seen: via Redbox

Rushed pacing feels like lack of confidence in the material's ability to sustain interest. The Murry family is all terrific, though - Storm Reid, Deric McCabe, Chris Pine, Gugu Mbatha-Raw. Can't put my finger on what kept me from enjoying this; maybe file under Not For Me. 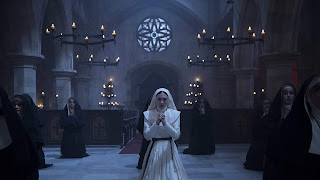 Oddly lifeless: even the "jump" scares are ineffective. One moment of kookiness near the end just highlights how disappointing the preceding hour was. Taissa Farmiga deserves better! 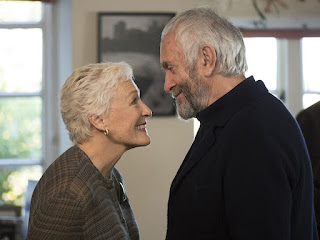 Oh, how I loved this movie! Glenn Close's genius portrayal of a woman willing to run things behind-the-scenes for her husband...until it gets to be all too much. The careful unraveling of the central narrative, the layered words and gestures that are a long marriage's shorthand, the integration of other wives standing by their husbands' sides, easily dismissed by the men but acknowledging each other with a secret sisterhood. The somewhat heightened tone of the flashbacks, as our titular wife looks back with anger, embarrassment, resignation at the choices she made, the things she said. Jonathan Pryce's terrific performance as a narcissistic blowhard who still genuinely loves the woman he's used and envied all these decades. A complex, human story. I loved it! 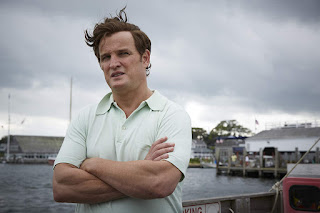 Avoids being lurid, but it's almost too light a touch. Not sure what the filmmakers want us to make of it all. Kennedy's a cipher. Kate Mara as Mary Jo Kopechne is the standout. Besides that...nice colors? 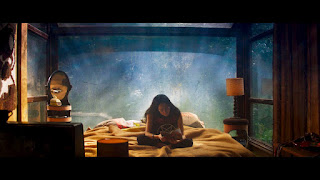 Impressive, dreamy first half centered on Andrea Riseborough; less intriguing second half centered on Nicolas Cage and his revenge. Yet I must admit, it's beautiful, unforgettable. The cinematography and editing together make for stunning, dreamlike visuals. And wow, that score! 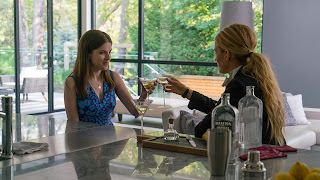 Deliciously camp noir full of shocking behavior, fabulous pantsuits, half-naked hunks, gasp-inducing twists. Yet another reminder that Blake Lively is underrated as an actress - drop in The Town and The Age of Adaline and you have a trio of charismatic, varied performances (and films!). The rare film that balances fun and suspense brilliantly. Give Paul Feig the next Agatha Christie! 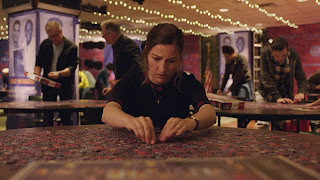 Weird little movie that checks a lot of boxes in the Sundance Quirk department, but I was won over by Kelly Macdonald's engagingly bizarre turn as a housewife whose love of puzzles awakens her to new possibilities that confuse and excite her. There's an original song at the end that I adore - "Horizons". Look it up! 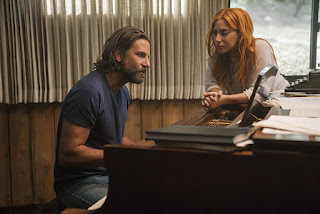 Meets all the impressive highs and short-sighted lows of the 1976 version. It looks great, it sounds great, and it's got three unimpeachable performances: Bradley Cooper, Andrew Dice Clay, and especially Sam Elliott, who towers above all else as the film's strongest element. Lady Gaga is as uneven as the soundtrack - sometimes impressive, sometimes merely serviceable, never embarrassing - but she's hardly helped by a screenplay that's more interested in the star on the wane rather than the one being born. My favorite songs, in order: "Music to My Eyes", "Black Eyes", "Maybe It's Time", "Look What I Found", "Always Remember Us This Way", "Shallow". 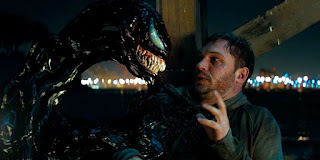 A questionable beginning, but once Venom enters the picture: wow! A kooky buddy-comedy about redemption and biting off heads. Surprising, fun. Could this be my favorite Tom Hardy performance?

Email ThisBlogThis!Share to TwitterShare to FacebookShare to Pinterest
Labels: 2018, A Simple Favor, A Star is Born, A Wrinkle in Time, Apostle, Bad Times at the El Royale, Chappaquiddick, First Man, Halloween, Mandy, Puzzle, reviews, The Nun, The Wife, Venom