With apologies for both the late posting and the absence of beloved titles like Executive Suite, Hobson's Choice, Prince Valiant, Riot in Cell Block 11, Salt of the Earth, and White Christmas.....


A feast for the eyes, with its genuinely wowser special effects, intricate production design, and Kirk Douglas. The spectacle is delivered, musical number included, without diluting the discussions of destruction as a means of salvation, environmentalism as the key to living in harmony, the line between genius and megalomaniac, and technology as deliverer of pain and peace. I don't need to tell you that James Mason is terrific, so tied is his performance with Captain Nemo in pop culture, but it certainly helps that his scene partners - Douglas, Peter Lorre, and especially Paul Lukas - are also delivering complex, engaging performances. 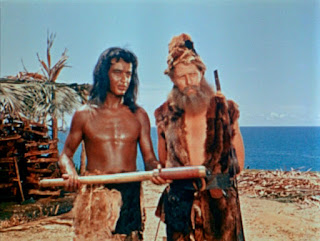 
I do love a survivalist drama; this one is both sadder and more hilarious than others, for though Crusoe has escaped the stifling society he was born into and builds a new way of life on a desert island...he recreates the life he left behind. Turns out it wasn't the society he disliked, just that he wasn't the one in charge. His relationship with Friday is telling: a man sentenced to die (for what crime, we shall never know) whom Crusoe saves, renames, and calls "friend" ... though he is treated as a pet and a slave. A cutting satire of the default colonial mindset that's as sharp today as it was then. 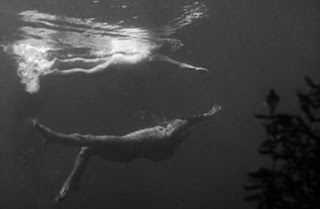 
Always a relief when the Universal Monsters films I worshipped in childhood turn out to be even better than I remembered on revisiting. Actually, it's even smarter than I gave it credit for, both in its execution of the mystery of the Creature and in its conversations about the thin lines between science, exploitation, and public relations, and how further learning doesn't necessarily mean debunking old beliefs. Of course, it also works purely as a creature feature: the Creature's bursts of violence are quite gnarly (those claws!), just as the famous water ballet is hypnotically sensual. 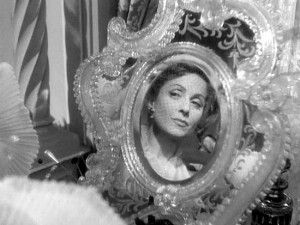 
Charting the indiscretions and affections of the bourgeoisie through a simple piece of jewelry that is sold, gifted, pawned, re-gifted, secreted, displayed, scorned and valued. I'm sure there's also metaphor in the fact that the people partaking in these games of love are also diplomats on the world stage, navigations of the heart akin to the negotiations of international politics akin to deal-makings of the wallet. Oh, but forgive me if I only think of that afterward, if during the film I can only watch the sparks between Danielle Darrieux and Vittorio De Sica, flirtation becoming passion against a backdrop of beautiful baubles and decadent soirees! 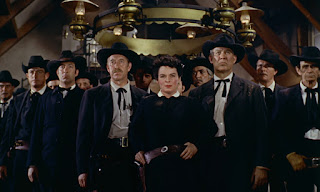 
A kooky western about society's fear of a strong-willed single woman of independent means and the madness of a witch hunt, with Mercedes McCambridge settling a vendetta against Joan Crawford under the guise of law and order. Not a wasted member of the ensemble, from Scott Brady's dangerously attractive Dancin' Kid to John Carradine's surprisingly sweet Old Tom (though I do feel bad for Sterling Hayden, whose pitch-perfect portrayal of the titular Johnny gets lost amid the tempest of JOAN). Genuinely wrenching, with perhaps the most depressing"victory" in any film of 1954, give or take Drive a Crooked Road. 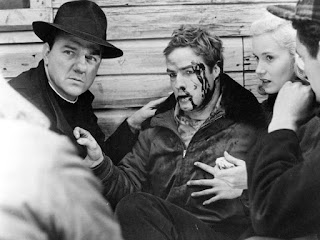 It is tough to name names, guys! If you are able to do so, it is only because you are a part of their community, so any informing immediately makes you a snitch, a traitor, a rat. But not taking action means enabling and abetting. There's a thin line between a snitch and a whistleblower, just different agendas defining the terms. So, yeah, On the Waterfront is a thinly-veiled justification of its creators' testimony to HUAC, but how do you stand up against tyranny without some kind of perceived betrayal? A complex issue explored thoughtfully, and even if it's not, it's a great working-class drama/noir populated by a murderer's row of top-tier talent. 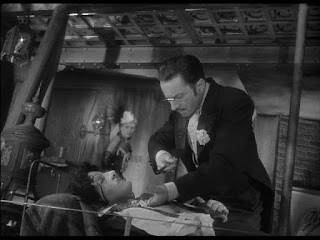 Three stories by Guy de Maupassant adapted by Max Ophüls, by turns dreamy, hilarious, heartbreaking - and altogether human. Ophüls' dazzling, sometimes dizzying camera moves - as in the sweeping dance that opens "Le Masque", or in the house tour that ends "La Maison Tellier" - convey an emotional reality, visualizing perfectly the feeling of nights spent clubbing, of bubbly exhilaration, of bitterness and hope, of loneliness and community. It is a film that values everyone, that finds interest in every interaction. And despite its anthology format, despite three stories with untraditional arcs, it is a complete a quilt of human foibles...and delights. 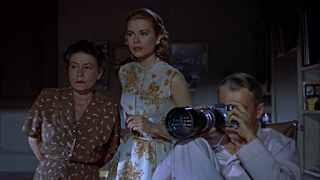 Hitchcock's preoccupations with sex, violence, and voyeurism are most literally and liberally applied here, with a laid-up nosey parker investigating a maybe-murder between debates about marriage with his girlfriend, his masseur, his detective friend, himself... Obviously, there's an unpacking to be done of how the film implicates its own audience, with the act of movie-going itself as the ultimate titillation, yada-yada-yada, yes, absolutely, of course. But if you do want just a tight mystery with side-eye of Thelma Ritter and a heaping helping of Grace Kelly doing her Grace Kelly thing, my God, does this movie deliver! 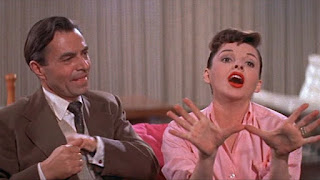 One of the very best films of its kind, an original musical where every song Vicki Lester performs is as vital to the story as every glass of scotch Norman Maine consumes. A sexy, exciting take that manages to tell its tale without pitting its leads against each other, reminding you again and again of the very real affection, nay adoration, between them, and how they use their talents and showbiz instincts to bring each other up, even if it's just for right now, even if it just gives them one more day. I'll never get over Norman's horror at realizing what he's put his wife through, or the pain behind Vicki's eyes as she performs through her helpless hopelessness.

Email ThisBlogThis!Share to TwitterShare to FacebookShare to Pinterest
Labels: 1954, 20000 Leagues, A Star is Born, Creature from the Black Lagoon, Johnny Guitar, Le Plaisir, On the Waterfront, Rear Window, Robinson Crusoe, Seven Brides for Seven Brothers, The Earrings of Madame De