Continuing our look at the films of 1970. The ten films herein were released within the first five months of the year - at least, according to that year's Reminder List for Academy Awards qualification. 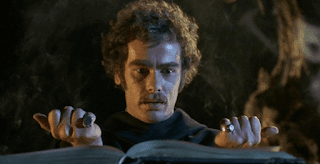 The Dunwich Horror
January
An odd young man plots to bring powerful gods from another dimension into ours. Aside from its under-utilization of Sandra Dee, I quite liked it: even the opening credits, designed by Sandy Dvore and underscored by genius Les Baxter, are eerie and entertaining. Psycho twink Dean Stockwell is a powerful presence, hypnotic eyes. Manages to show enough glimpses of its big beast to turn your head, keeps enough secret to make its victims' horror chilling. 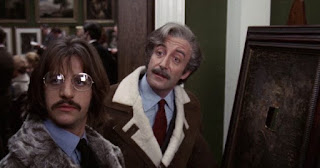 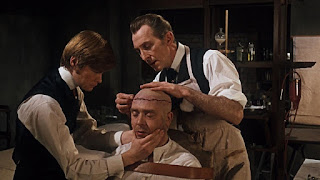 Frankenstein Must Be Destroyed
February
Victor Frankenstein continues his experiments and murders. Supposedly Peter Cushing's favorite of the Frankenstein films, even as it simultaneously included a rape scene that he felt was unnecessary, uncharacteristic. Cushing is right about the rape scene. As for the rest...the makeup is suitably gruesome, the movie is surprisingly dull. Thrilling opener, good finale, dull in between. 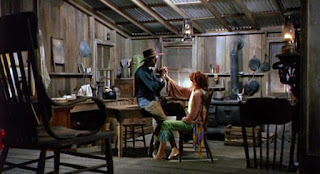 The Last of the Mobile Hot Shots
February
Dying man brings new bride to dilapidated plantation, where he vies for ownership with his black half-brother. Even I, while watching, wondered if Tennessee Williams was parodying himself, and a look at reviews of both the film and its source play, The Seven Descents of Myrtle, shows I'm not alone. So, I don't know, I think it might be purposeful, though it doesn't completely excuse the unevenness. Shoulda kept the play's bold finale - isn't it odd that, as other studios put out explicitly gay material (like The Boys in the Band, Myra Breckinridge, Something for Everyone), this Gore Vidal-scripted Williams adaptation removes all direct references to cross-dressing and repressed homosexuality and instead just...winks? Lynn Redgrave's wonky Southern accent is pretty funny. what a set! 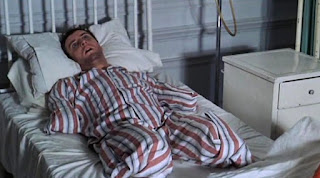 Scream and Scream Again
February
Disparate plot threads - a fascist government, a string of mysterious murders, a man losing his limbs one by one - have a shocking connection. Shocking and confounding. It's a weird movie that barely makes sense, but what style! Alfred Marks the highlight as an exhausted police inspector. 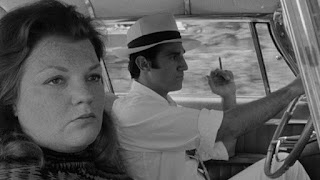 The Honeymoon Killers
March
True story of a couple with a scheme wherein the boyfriend seduces and fleeces older women through various means (including phony marriages); then they start to kill. Have I mentioned before that sometimes I have trouble articulating why I like a particular film? I just think The Honeymoon Killers is perfect in every way. It never asks you to sympathize with our protagonist, the strict and lonely nurse Martha Beck (Shirley Stoler), with her jealous tirades, short temper, homicidal tendencies, and anti-Semitism, but it gets us so involved in her lusts and passions, her inflated self-importance and downplayed amorality; you don't root for her, but she is fascinating, you can't look away. Equally unexpected is the care with which each of the killers' victims is developed and performed: some are more sympathetic than others, but each is vividly realized.

Zabriskie Point
March
Radical on the run meets disillusioned secretary on holiday in the desert. This is the closest I've come to liking an Antonioni film - I was mostly with it until the two leads actually crossed paths. From then on, I was frustrated at having to spend time with these ninnies. I don't know, I don't get it, and I couldn't stand these damn kids, especially the boy with his protestations about revolution and taking action, and then just choking unless it came to a joy ride. Sure, that could be part of the point, but I don't have to like it. 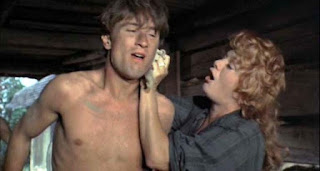 Bloody Mama
April
True-ish account of public enemies the Barker Brothers and their ringleader* mother. Shelley Winters plays Ma Barker as a woman tired of having been kicked around by life, confident in her superiority, sometimes debilitated by increasing mood swings. It's Bonnie and Clyde Roger Corman-style, so while there are plenty of exploitation elements - the suggestion of incest, prison rape, Ma Barker's sexual needs, a bloody finale - there are also more meditative moments that prove more haunting. I'm thinking of Robert De Niro as the drug-addict brother who kidnaps a bathing beauty while high, or Pat Hingle as a rich hostage who Ma goes to seduce.
(*I believe this has since been debunked; Ma Barker was a nuisance to the FBI as a mom, sure, but no one thought to directly connect her to criminal activity until after she got caught in a hail of bullets meant for her kids) 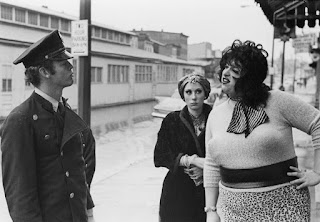 Multiple Maniacs
April
There's no way to prepare you for this one. There's bad-taste commentary on topical events, blasphemy that could only be conceived by someone who paid attention in church, sex and murder and bestiality on a, shall we say, creative scale. It's over-the-top, it's offensive, it's...so damn good. Combining the low-grade charm of Herschell Gordon Lewis (the title itself riffs on his Two Thousand Maniacs) and the DIY fevered passion of Andy Milligan (there's a nastiness that recalls Seeds), it's not what you'd call realistic, exactly, but you can't say it's inauthentic, and you certainly can't deny the genius of its juxtaposition of criminal thrills, sexual nirvana, and Passion Plays. A hoot.

Beneath the Planet of the Apes
May
Another astronaut follows Charlton Heston's trajectory from the original, but this time he encounters an underground city of psychic humans who worship a nuclear warhead. A dull retread until it isn't, and from then on, it's pure kookiness. The sets creating a NYC cityscape that's been buried for several generations is effectively eerie, the big "reveal" of the psychics' secret is bonkers, and even the end credits are a puzzlement (you're going to list a bunch of unspoken character names with the exception of....Fat Man and Negro????). It is also a hoot.
Oscar nominees released in this period: MASH (February), Patton (February), Airport (March), A Boy Named Charlie Brown (March), The Molly Maguires (March), Woodstock (March), Fellini Satyricon (April), My Night at Maud's (April), Let It Be (May), Women in Love (May)
Other films: The Boys in the Band (March), The Liberation of L.B. Jones (March), Start the Revolution without Me (April)
You May Also Enjoy:
ZergNet
Like us on Facebook
Posted by Walter L. Hollmann at 9:10 AM

Email ThisBlogThis!Share to TwitterShare to FacebookShare to Pinterest
Labels: 1970, Beneath the Planet of the Apes, Bloody Mama, Multiple Maniacs, reviews, The Dunwich Horror, The Honeymoon Killers, The Last of the Mobile Hot Shots