Big plans for next month! One big plan, anyway: a new season of retrospectives begins with The Films of 1950!
That includes the 42 films honored with wins and nominations at the 23rd Academy Awards. And here they are: 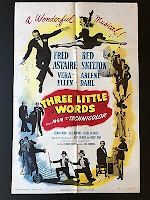 Naturally, we'll take a look at other films released in the United States that year, including Orson Welles' 1948 adaptation of Macbeth and Jean Renoir's 1939 classic The Rules of the Game. Tune in Monday-Friday, all month long, starting May 2nd!
You May Also Enjoy:
ZergNet
Like us on Facebook
Posted by Walter L. Hollmann at 3:56 PM

Email ThisBlogThis!Share to TwitterShare to FacebookShare to Pinterest
Labels: 1950, Oscars