Zombieland is So Fucking Baller 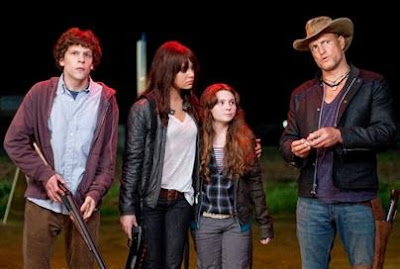 OK, maybe not Number One, but I did have a great time. I got all goose-pimply and excited. I was eating ice cream at one point and was so shocked and frightened that it spilled all over my Members Only jacket. At another point, I was afraid someone I had grown attached to was going to die...and I actually teared up. I was that obnoxious person that laughs weirdly and distractingly in the theater, but I couldn't help it.

The script is amazingly refreshing. As cool as the zombie kills are, they really are few and far between. Instead, we get a road trip movie about the importance of human relationships. The good, the bad; either way, people who need people are the happiest people in the world. I don't mean for it sound pretentious or un-zombied. The zombie kills are EPIC. But it's nice to get four fully-developed characters.

All the leads are great. Jesse Eisenberg plays the lead, Columbus (they are all identified by either origin or destination), a nerdy, friendless fellow with a set of rules of handling the zombie apocalypse. Woody Harrelson is the bad-ass Tallahassee, and let me tell you: seeing a movie with a hero named Tallahassee while living in Tallahassee is epic. Every line generates applause and hoots from the crowd. Emma Stone and Abigail Breslin are sisters and survivors; Stone just gets better and better, and Breslin fucking earns that Oscar Nominee status.

David Sardy's score is worth remarking upon if only for the way he recalls Ennio Morricone and his spaghetti westerns. Quentin Tarantino, take note: the next time you want Morricone, hire Sardy. He's young, he gets the vibe, but he still makes it his own.

Ah, but it is not perfect. There's a cameo in the movie, sure to be famous by the end of the month, that is distracting. It's awesome, certainly, but it's the only time when we are clearly watching a movie. It's self-aware in a way that little else in the movie is, and while it certainly plays, it took me completely out of the story. Sorry, but pad the running time some other way.

Ooh, but let's talk about director Ruben Fleischer. You know, I know McG gave them all a bad name, but between Fleischer, David Fincher and Marc Webb, I think music video directors are some of the most talented filmmakers out there. They know pacing, they keep things interesting, and they manage to get career-best performances from their actors.

Hey, I know it doesn't exactly need your help, but go and see this movie. It's probably the best movie out in theaters right now. I certainly feel like a jerk using my free movie pass tonight. I'm sorry, Fleischer & Co. I'll never do that again.
Posted by Walter L. Hollmann at 8:48 PM

The title says it all. It's a hell of a time at the movies.