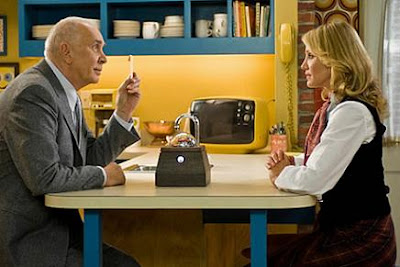 The Box is such an odd little movie. I mean, it's a Richard Kelly film, so head-scratching is inevitable. This is, after all, the guy whose previous films are giant bunny flick Donnie Darko and clusterfuck Southland Tales. The Box fits snugly in between, for while it at least has a story (take that, Southland Tales), it is not as consistently brilliant as Kelly's debut.

Another Virginia-set period piece, The Box revolved around a middle-class couple played by James Marsden and Cameron Diaz, and the Mysterious Arlington Steward (Frank Langella) who makes them a curious offer: they will receive one million dollars for pushing a button on a hollow box...but someone they do not know will die. And that's the first ten minutes of the film. The rest is the unraveling of the mystery. What is the Box? Who is this Mysterious Arlington Steward with half a face? What's it all about, Alfie?

Kelly's film is an uneven one. While I could not help snickering at some lines at the beginning, I was breathless by film's end. It's a brilliant finale, preceded by both genuinely chilling moments and head-shakingly cheesy ones. Marsden and Langella are consistently great, but Diaz teeter-totters between exquisite and just OK. I don't think Kelly's script is any big help, of course, as the role of Norma Lewis is too saintly for the film's premise to work. The cinematography by Steven B. Poster is oddly bright, and at times looks a little soft. It gives the whole movie a weird, dreamy effect that is appropriately uncomfortable.

I wish they had done more with the setting. Christmas 1976 looks awesome, but there's no real reason for it. Christmas matters not, except to give us a creepy Santa; at least give me some holiday-themed dialogue like William Hootkins in Hardware. The 1970s aspect is cool, but man do they beat you ober the head with it. Many scenes begin with a popular 1970s something on TV, someone switches it off, begin dialogue. This happens multiple times. Johnny Carson! The crying Indian! Alice's Restaurant! It's the SEVENTIES! But...why the seventies? Because of the references to the Mars Viking project? I don't understand its relevance to the plot, really -- though this may be due to the typical density of Kelly's stories.

The best part of the film? The score by Win Butler, Regine Chassagne and Owen Pallett, members of the Canadian band Arcade Fire. Eerie, beautiful, period-perfect. The violins, the piano, it's all very atmospheric. That's a guarantee in a Richard Kelly movie: the music will always be phenomenal.

At the end of the day, I know I would buy and re-watch this movie over and over. It's great fun, it's outrageous, and sometimes it's a damn masterpiece. It ain't perfect, but it's got spirit! 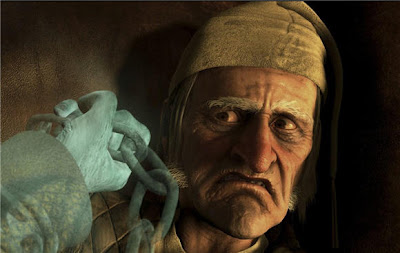 This is how all weekends should start: with a 3D spectacular that's determined to be a MAJOR FREEKING EPIC!!! God Bless Robert Zemeckis and team for not pulling any punches in what is sure to become a holiday tradition! Yes, yes, we all know the story by now. Scrooge and the ghosts and Cratchit and Tiny Tim and all that. And certainly, nothing will ever equal the 1951 version starring Alaistir Sim , easily the most atmospheric and darkly funny of all the films. But damn if this one doesn't come close.

This movie gets it. The gallows humor, the horror aspect, the spiritual LIFT that is achieved by journey's end. The Ghosts are horrifying, even the one of Christmas Present, to an extent. The figures of Ignorance and Want -- shit, I don't want no part of them. And it's truly the first version of this timeless tale that I felt that fear of either. The Ghost of Christmas Yet-to-Come is cleverly interpreted, though it must be said that a "harrowing" chase scene in his segment is awkward, a curious misstep for this production.

Alan Silvestri's score is made up of boisterous renditions of holiday hymns such as "Good King Wenceslas" and "Hark! The Herald Angels Sing". Andrea Bocelli sings an original song with a huge chorus of children over the closing credits. The effects are eye-popping and grand. A truly miraculous production, it demands hyperbole and multiple exclamation points!!!

Yet it also has its intimate moments. The Cratchit home during the Christmas Yet to Come sequence is heart-wrenching, and the breakup scene between young Ebenezer and his fiancee is almost uncomfortably quiet. Jim Carrey and Robin Wright Penn really sell this scene, of course. Indeed, Carrey does a wonderful job in a number of roles, including Scrooge through the years and the Three Ghosts. His eyes are not "dead", as is the regular complaint with mo-cap movies, but full of the bitterness or jocularity required. Zemeckis's pet etchnology is improving every year. Only Colin Firth's character, nephew Fred, was beset with emotionless eyes, but everyone else was surprisingly full of life.

Besides Firth and the chase scene, the only real problem with the film is a strange shoving-aside of Tiny Tim. When Scrooge pleads for Tiny Tim's life, all I could think was, "Why? What was he seen about this kid that makes him so sympathetic?" It's one of the most important aspects of the story, and it hardly seems relevant here. Bizarre.

I wish I had the money for the soundtrack. It's what Christmas should be.
Posted by Walter L. Hollmann at 2:30 PM

I guess I have to see these now?