As October waned, I made the effort to see some 2009 releases when not working on other people's films. And I did it! But first, some news:

Because of my actual Film School activities and some last minute rigmarole concerning ticketing, I was unable to attend the Ian McKellen thing. That will teach me to brag prematurely. The absolute worse part? I overheard this conversation at Borders two days later:

MAN: I saw Ian McKellen speak the other day at the theatre school.
WOMAN: Who?
MAN: You know, the guy from Harry Potter?
WOMAN: Oh, yeah...
MAN: Yeah, he was interesting. He sure could talk, though. After two hours, I was like, "Come on, already."

You, sir, did not deserve to see Ian McKellen, and not just because you think he's Michael Gambon. You got tired of watching him speak. You can take whatever Armistead Maupin book you picked out and shove it up your ass, for while you may be able to read, you are certainly illiterate in the realm of theatre and all that is holy. Shithead.

And now the reviews:

So, Matthew Perry's life is going down the tubes, and Brian Doyle Murray magics him into his younger self, who happens to be Zac Efron. Now he gets to help his kids...in HIGH SCHOOL. I remember laughing out loud and finding it perfectly charming. Yet I cannot really remember the movie itself. Zefron and Perry do a surprisingly good job of playing different ages of the same man, so that was neat. Zefron got Perry's mannerisms down to a T. And I liked the romance between Zefron and Leslie Mann -- that they sold it as uncreepily as they did says a lot about their abilities as actors. Other than that, and an odd date scene between Lt. Dangle and Jan Levinson-Gould...meh.

Holy crap, is this really the first movie I saw in theaters since Jennifer's Body? A good way to end October, surely. It's probably the smartest in the series since Saw II (which I love), and even gets to be relevant by taking on the Vice President of a Health Insurance Company! The challenges in this game are actually pretty suspenseful, and I cared a LOT about what happened to the characters this time around. It was nice to finally care again. The editing was also a lot less ADD this time around. Great fun, if you're into it. But if you don't like Saw to begin with, you won't see this anyway. That's OK, but you'll be missing some great entertainment. 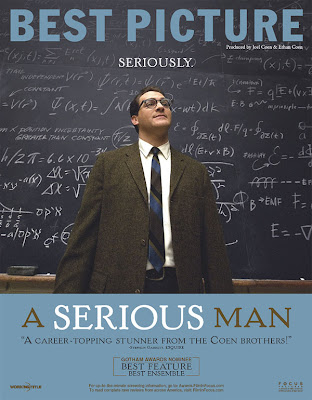 Some movies get better and better upon reflection. This is one of those. True, I only just saw it Sunday night, but even now, I'm thinking it's probably one of the best movies of the year. It's basic plot: Larry Gopnik (Michael Stuhlbarg) goes through a week of crises in a mostly Jewish community in 1967 Minnesota. You would think a movie that basically tells you God doesn't care and religion won't help would be a downer. Ok, it is in a way, but it is uproariously funny at the same time. The Coen Brothers may have won their Oscar in 2007, but this film is their true masterpiece. Stuhlbarg's performance should be generating more discussion, but for me, it was all about Fred Melamed as Sy Ableman, a pompous intellectual whose eloquent phraseology is hilarious in its pretentiousness. A gem of a comedy -- but DARK.


WHERE THE WILD THINGS ARE

Despite the pacing issues -- the middle portion is QUITE padded -- I really enjoyed Where the Wild Things Are. I wasn't ready to be hurled into the darker, more complicated second half of the film, but I liked that it took me there. There's some real genius in the expansion of Maurice Sendak's universe, as written by Spike Jonze (also director) and Dave Eggers (who co-wrote the disappointing Away We Go earlier this year). Some deep, disturbing shit goes down in this movie, and it hits hard. Catherine Keener's teeny tiny role as the mom is great (as always), but let us not forget the Wild Things. Although they are not in the costumes, James Gandolfini, Catherine O'Hara, Chris Cooper, etc., bring a lot to their table in their performances. And of course, Max Records, playing Max (appropriately enough), is just as talented as he is adorable. Can't wait for this kid to get more work.

Ack, but that Karen O score! Distracting, cacophonous, irritating! Yes, yes, it is appropriately "wild", but it was not my cuppa, thank you very much. Such a shame; "Maps" is my second favorite song of all of ever.

[Pic from AwardsDaily]
Posted by Walter L. Hollmann at 9:38 PM

Glad to hear you enjoyed A Serious Man. It is certainly a film that requires a lot of reflection and that amount of reflection has had a positive impact on me as well. The film raises so many questions that it's impossible to have all the answers by the time the credits roll.