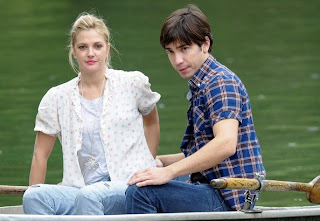 Better editing and a lack of Charlie Day (as Justin Long's painfully unfunny roommate) would significantly improve this already likable romantic-comedy. Drew Barrymore, director of last year's criminally underrated Whip It!, offers what I think is her best cinematic performance since Ever After (though I must check out Riding in Cars with Boys and rewatch Confessions of a Dangerous Mind), making her foul-mouthed, somewhat childish wannabe-journalist character into someone we can actually care about. Justin Long's frustrated, somewhat childish character also fares well, though many of his decisions come without decision-making beats. And I know he's a capable enough actor to give those, so again, I blame the editing. The same editing that forces the audience to watch arbitrary close-ups of a band while the actual story is happening off-screen. The last scene shouldn't be the last scene either, as it kills the climax.

There's a lot of stuff going for this movie. The central performances, a lot of the writing, and a determination on everyone's part to make this situation actually, you know, believable and realistic. When it's that movie, it works. At other times, we're clearly getting an Apatow knock-off. That may not sound fair, since he didn't really invent the improv-heavy raunchy rom-com, but certain sequences, particularly those with Jason Sudeikis and the aforementioned Day, give off this vibe, and are uncomfortably at odds with the rest of the film. The worst you can say is that the director and her editor really misjudged where to take the film, sometimes opting for random jokes instead of plot/character-forwarding ones, and covering whole scenes in closeups.

But again, for all the bad stuff, there's also great stuff. I will never get over Drew Barrymore drunkenly telling someone to suck her dick. That's great. It's about B-/C+ territory.

Best in Show: Drew Barrymore
Not So Much: Charlie Day 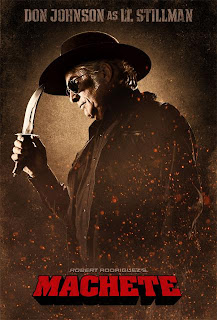 You get what you paid for. It's an exploitation flick where Danny Trejo romances Michelle Rodriguez, Lindsay Lohan and Jessica Alba, where Robert De Niro and Don  Johnson play good ol' boys, where Steven Seagal (who just hasn't aged well at all) is a Mexican drug lord, where Cheech Marin is a shotgun-toting priest, where every woman bares her breasts and every man has a hairy chest. Except Machete. His chest is all tats, baby. If Grindhouse was your cup  of tea, you'll probably love this. I certainly did! I do agree with my friend, though: seeing Lindsay Lohan as a drugged-out, slutty fame-whore wasn't even funny so much as it was sad. Her last scene's pretty solid at least. B

Best in Show: Don Johnson
Not So Much: Seagal, probably, as he was pretty unintelligible throughout, but who can say how calculated that was in a film like this? 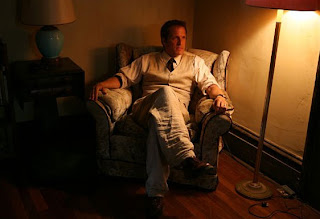 Pretty solid horror flick in which a protestant exorcist is losing his faith. He allows a documentary crew to follow him on his last exorcism (HEY, HEY!) so that they can capture what a fraud it all is. But is it? The found footage conceit is fun, but sometimes the movie itself seems to forget that it exists: we tend to get coverage across the room from where the lone cameraman supposedly is. Whatever; if you can get past that, you'll get a scary, gripping film about faith, prejudice, salvation, and the nature of evil. The anchors, of course, are the central performances by Patrick Fabian (the preacher) and Ashley Bell (the possessed).

People online have started complaining about the ending, but any viewer who's been paying attention throughout should realize how fair the filmmakers have been throughout. Every last detail of the finale is foreshadowed, so don't come here bemoaning how it goes off the rails. (Actually, do, so we can discuss it and exchange opinions and get to know each other.) Horror aficionados will especially love it, since it's actually a creeping terror instead of a JUMP AT THE SCREEN kind of thing.

It must be admitted, though, that sometimes the acting leaves a little to be desired. But isn't great thesp work a luxury for most movies anyway? Bask in the majestic glow of Fabian and never mind other performances. B+

Best in Show: Patrick Fabian
Not So Much: Iris Bahr (as the documentarian)
Posted by Walter L. Hollmann at 7:33 PM