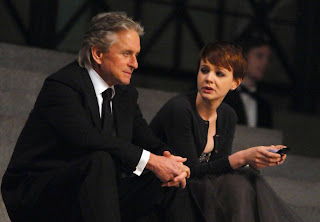 As incoherent and wildly over-the-top as this movie can be, I certainly loved it. Crazy Oliver Stone is great Oliver Stone, and here he's delivered an energetic, sometimes bafflingly edited (but in a good way) indictment of these times. Where Wall Street was a warning, Money Never Sleeps is a harsh reflection, and some wry observations about short-sightedness almost come with a shrug of "I told you so". Most of the monologues make their point in the first couple of sentences, then go on babbling nonsensically about some strange metaphor writers Allan Loeb and Stephen Schiff have shoe-horned in. Sylvia Miles reprises her role as a realtor. Just go with it. Have fun. Rodrigo Prieto's cinematography rocks, Craig Armstrong's score is pretty good, and the acting's great! Michael Douglas, Shia LaBeouf, Susan Sarandon, Frank Langella, Carey Mulligan, Josh Brolin: all great, all solid, all believable. Eli Wallach is a madman, but it's awesome and I dig it. It won't be for everybody, but the people who it is for will adore it.

Beautifully shot, subtly directed, mesmerizingly acted. Director Anton Corbijn, cinematographer Martin Ruhe and star George Clooney take all the feeling of loneliness and visualize it. I don't mean just Clooney staring pensively while sitting alone, but the way in which everything is framed, the lingering on a butterfly, the hypnotic entrance of a prostitute, the solitary drives through serene vistas. It's all very beautiful, and (thank the Lord) not without purpose. I'm sure eventually I'll stop being impressed with the subtle ways Clooney humanizes his characters, but that day hasn't come yet. Violante Placido also impresses as the kind-hearted hooker (aren't they always?)...and her looks don't hurt either. What few action sequences there are are genuinely thrilling and cut together clearly! There was a time in the middle where I thought, "This is beautiful, but am I going to care after tonight?" Fortunately, the ending paid off, and I do.

Channing Tatum does a fine job, charismatic and realistic. I like the chemistry between him and Amanda Seyfried. Terry Stacey's cinematography is nice. Otherwise? The film almost plays as a parody of such movies, it's so ridiculous. We get cancer, autism, class distinctions, 9/11, a beachside brawl, a Mysterious Past, coin collecting, a misleading opening monologue, a final scene that does not fit with anything. It's just too much. And not like a Tyler Perry movie, where its camp value is worth its weight in gold, but in a boring, "guess they missed the mark" way. Shame. 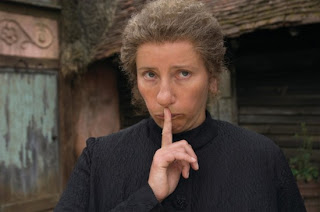 I thought it was just delightful. Never saw the first one, but this movie had me laughing and crying continuously. You can wait for the DVD, but I do recommend picking it up.  My all-time favorite actress, Maggie Smith, has a seemingly trivial role that becomes important as the film progresses, and her last scene absolutely broke my heart. And hey, Maggie Gyllenhaal's English accent is quite convincing! Emma Thompson, of course, is perfection, and Rhys Ifans almost carries off with the film. Great fun!
Posted by Walter L. Hollmann at 12:13 PM

THANK YOU, about Nanny McPhee. Absolutely lovely...love Maggie's cameo, and Ralph and Ewan. Heck, I love it all.
(Seeing The American later, still loathe Clooney but hopefully I'll like it.)