Finally! After many delays and broken promises, I've finally got A Wrinkle in Time CCT'd...on a Wednesday. Hey, it got done, right?
I took so long, though, because I did want this to be just right. You see, the novel was recommended to me last summer by an actor and friend I greatly admire; a year later, one of my close friends waxed rhapsodic about it, so I finally got around to reading it. If two people I hold in high esteem love Madeline L'Engle's popular novel as much as they do, then it must be worth the read, right?
Right indeed. I was charmed by the Murrys: I could identify with Meg, and while the idea of a sex-year-old as genius as young Charles Wallace seems absurd...eh, I went with it. There are a lot of impressively brilliant children out there, so I didn't see why a telepathic pre-kindergartener who communicates with angels should be bizarre. Then, of course, the Mrs. Ws, especially dear Mrs. Whatsit, who quickly became my favorite character in the book. The plot itself was one that had me re-reading certain passages to reassure myself of what I was reading. But it was there: a mode of travel through space and time called "tesseracting"; a cold, clammy Black Thing that is attacking the universe; and a distant planet turned into a warless, fascist world of conformity by a large brain known only as IT. It was weird. It was glorious.
It was the perfect subject for a film! Certainly, the casting seemed off when I looked up the television version from 2004. Twenty-year-olds to play the leads? It's not like we're short on child actors, people. Besides, I had some ideas of my own while reading it, and some more well after. The only major characters not to show up here are the Murry twins and Charles Wallace. The twins are bit parts, and probably could go to unknowns -- also, I don't know of many twins actors. As for Charles Wallace, that has to go to an unknown, for it will be a rare thing indeed to find a child of that age range that could play the character. As for the rest...well, judge for yourselves.
THE MAN WITH RED EYES
Who is He: Prime Coordinator of Camazotz, he is the vessel through which IT speaks to Meg, Calvin and Charles Wallace. He communicates telepathically. IT enters into Charles Wallace when the boy looks in the eyes of the Man with Red Eyes.
My Choice: 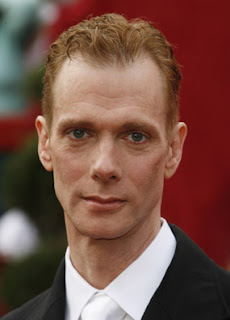 Doug Jones (Hellboy, Fantastic 4: Rise of the Silver Surfer)
This time we get to see his face. And what a menacing, terrifying face it is. Not in a bad way, though, in a "could totally pull off this role" way. And with red contacts, the effect would be terrifying.
AUNT BEAST
Who is She: The blind, telepathic, tentacled creature who nurses Meg after she is frozen by the Black Thing. Aunt Beast is nurturing and loving, with a soft and motherly voice.
My Choice: Academy Award Nominee for Best Actress (Fatal Attraction, Dangerous Liaisons) and Best Supporting Actress (The World According to Garp, The Big Chill, The Natural), BAFTA Award Nominee for Best Actress (Dangerous Liaisons), Golden Globe Nominee for Best Actress in a Drama or Musical/Comedy (Fatal Attraction, Maxie, 101 Dalmatians)
Glenn Close (Tarzan, Hoodwinked!)
Of course, Aunt Beast herself would have to be played by a Where the Wild Things-esque blend of costume and VFX, but the soothing tones of a mother should be done by one whose voice is soft and reassuring. Remember her work in Tarzan? Of course you do, she was magnificent.
THE HAPPY MEDIUM
Who is She: A jolly woman whose crystal ball reveals the Black Thing, an evil being attacking the universe. She lives in a cavern on a planet in Orion's Belt.
My Choice: 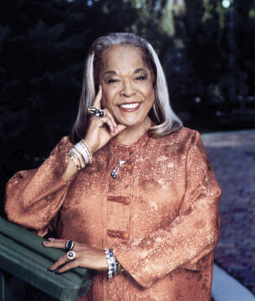 Della Reese (Harlem Nights, Beauty Shop)
She's got a kind of mystical quality to her...probably from all those years as Tess on "Touched by an Angel". She's also got a wonderfully jolly smile and laugh, which I think would help in playing a character who's "jolly". 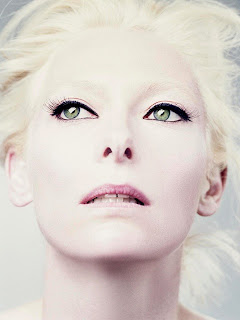 Tilda Swinton (The Lion, the Witch and the Wardrobe, Julia)
An otherworldly woman. She's got a great voice for the angelic, echoey effect, too.
MRS. WHO
Who is She: One of the Mrs. Ws. Round and bespectacled, Mrs. Who speaks in various languages and often quotes the Bible and Shakespeare. She finds it difficult to use her own words to express herself.
My Choice: BAFTA Award Winner for Best Supporting Actress (The Age of Innocence) 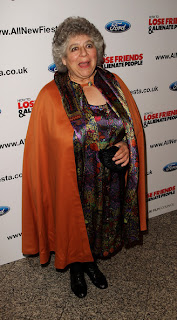 Miriam Margolyes (Romeo + Juliet, Harry Potter and the Sorceror's Stone)
She is a plump woman who would look owlish with spectacles. A wonderful supporting actress, you could just plop glasses on that face above and she'd be good to go.
MRS. WHATSIT
Who is She: An elderly woman in appearance, she is actually the youngest of the Mrs. Ws. Because of this, she has the easiest time communicating with the children, and it is she makes contact with Charles Wallace and the Murrys. Mrs. Whatsit is a tiny woman wrapped in various layers of clothes, and it is rumored that her house is haunted.
My Choice: Academy Award Winner/Golden Globe Nominee for Best Supporting Actress (The Year of Living Dangerously) 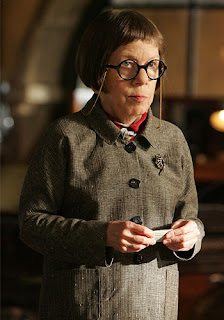 Linda Hunt (Ready to Wear, Stranger Than Fiction)
As soon as this character appeared, I immediately thought of Linda Hunt.
DR. ALEXANDER MURRY
Who is He: An astrophysicist, he's been missing for some time at the novel's opening. As it turns out, he's been researching fifth-dimensional traveling, or tesseracting -- that is, the same method of travel the Mrs. Ws use. Unfortunately, his research puts him at the mercy of the Black Thing, and he becomes a prisoner of IT. Long-haired, bespectacled, handsome, and a devoted father.

My Choice: Golden Globe Nominee for Best Actor in a Musical/Comedy (Kate & Leopold) 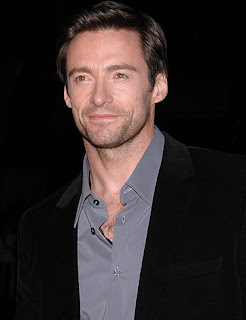 Hugh Jackman (Scoop, Australia)
Much of the story is spent in anticipation of eventually seeing him, so why not cast someone audiences will anticipate seeing? Plus, he can rock the long haired, bespectacled handsomeness.

DR. KATHERINE MURRY
Who is She: Microbiologist and beautiful, red-headed wife of Alex. She is a devoted mother, working from home in her own laboratory. Her beauty and intelligence, though, unknowingly put pressure on Meg. 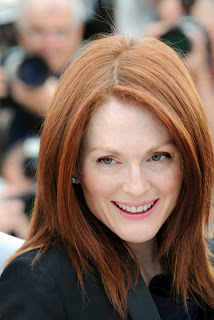 Julianne Moore (Savage Grace, The Kids Are All Right)
Beautiful. Intelligent. Red-headed. Really, the only other option would be my girlfriend, but she's not old enough to have a fourteen-year-old daughter. So, Julianne Moore it is, then.

CALVIN O'KEEFE
Who is He: Fourteen-year-old high school junior who plays basketball. He likes being around the Murrys far better than being with his own inattentive family, and he winds up traveling with them to Camazotz. Of course, there also seems to be a "thing" between him and Meg. 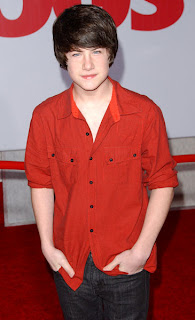 Dylan Minnette (Let Me In, Fred Claus)
I was having a lot of difficulty with this role, but then I saw Let Me In. This kid walked on-screen and I immediately went, "Of course! Perfect!" It may seem bizarre of me to choose someone based on their portrayal of a sadistic bully, but he was also good as Jack's son on "Lost", so I think Calvin's in good hands here.

MEG MURRY
Who is She:  Our protagonist. Bespectacled, brace-faced, and mousy, Meg is unruly and unpopular. Though brilliant in mathematics, she is considered hopeless in other school subjects, and often does not apply the gifts bestowed upon her by God and good genes. She misses her father, is protective of her youngest brother Charles Wallace, is attracted to Calvin, and goes on a tesseracting journey through time and space. 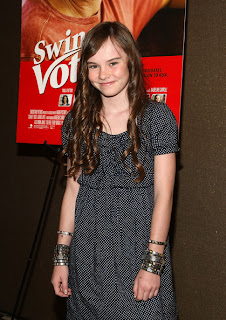 Madeline Carroll (Swing Vote, Flipped)
Can you believe I'm basing this off of a commercial I saw her in? Those 30 seconds impressed me more than most other young actresses in whole films. Carroll seems to be admired in the industry, though, and what with being age-appropriate and someone who is obviously one to watch, I feel like she's just what this film needs to anchor it.
Posted by Walter L. Hollmann at 1:44 AM