A fine day of thrift-store shopping with my sister led to a bounty of books, some film-related (of course!) and some kind of. Behold: 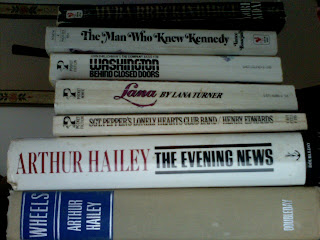 Top to bottom:
Myra Breckinridge by Gore Vidal, "32 PAGES OF ACTUAL PHOTOGRAPHS FROM THE FILM!"
The Man Who Knew Kennedy by Vance Bourjaily
The Company by John Ehrlichman, but seen here with the title Washington Behind Closed Doors as a promotion for the TV miniseries with Cliff Robertson, Andy Griffith and John Houseman
Lana by Lana Turner, an autobiography
Sgt. Pepper's Lonely Hearts Club Band, a novelization by Henry Edwards of the critically-butchered film (as my friend put it, "the book of the film of the LP")
The Evening News by Arthur Hailey, about network news, from the author of Airport
Wheels by Arthur Hailey, about the automotive industry, from the author of Airport
in addition: The Happy Hooker, Celebrity, some Anne Rivers Siddons, Twins by Roxanne Pulitzer, Jackie Collins, and more!

Sometimes you are such a nerd... and I wouldn't have it any other way.