Cinema '65: Beach Party and Its Kind

Guess who watched a bunch of beach movies? Me! I did! 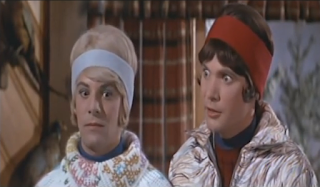 In retrospect, it's nuts that my introduction to the world of Beach Party was the film Ski Party -- the main setting is different, the characters are different, and except for a quick gag where she plays a college professor who goes "parking" with students, no Annette Funicello. But boy oh boy what a flick! Frankie Avalon and Dwayne Hickman disguise themselves as ladies on a college co-ed trip to a ski lodge, with Hickman almost finding love with the big man on campus! A creaky idea? Maybe, but executed with fun, real wit -- and a Lesley Gore number! There's even a scene where our heroes choose not to stay the night with some girls they've duped because "the average age of this movie's audience is 14." Fun! 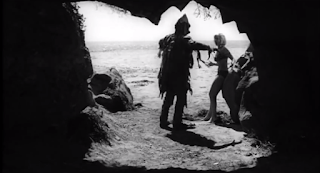 Not fun? The Beach Girls and the Monster, a cheapo horror-mystery about beach bums and their disappointed parents. There aren't enough beach girls to justify that title, really, while the conversations the movie attempts to have about the Generation Gap and Changing Times are embarrassing. I don't think the mystery holds up, either. Sue Casey plays an enjoyably boozey, acid-tongued wife, though. And Frank Sinatra, Jr., contributed to the soundtrack, so that's...something. This is not a Beach Party film, but it's clearly influenced by the success of that series.

I did wind up returning to the world of Beach Party with How to Stuff a Wild Bikini, though again, it's an atypical entry; while it's the traditional Beach Party ensemble (including big dummy Jody McCrea and leather-clad dummy Harvey Lembeck), Frankie is off the beach, serving his country, canoodling with island girls on base, but convincing witch doctor Buster Keaton to send a magical pelican to keep an eye on Annette's fidelity. Such a conceit is risible, and my jaw dropped when the opening musical number revealed exactly how one stuffs a wild bikini -- 36-22-36. Blech, though catchy. Not surprisingly, this was one of the final films in the official series.

Now Beach Blanket Bingo, I can deal with. Frankie spends the entire runtime explaining why girls can't do what boys do, while Annette does exactly what she wants and teaches him a lesson in how awesome she is. Don Rickles does a whole set mocking the fact that this franchise is still going. Paul Lynde does his mincing-sneering-hating youth routine, which is always welcome. There's a sweet subplot about big dummy Jody McCrea falling in love with a mermaid. I think someone almost gets murdered? Plus there's this one extra who's clearly a genuine 60s party girl (far right in the gif), marching to the beat of her own spectacular drum. I love her. I love this movie. Except for the scene where a jealous girl tries to accuse Frankie of rape.

Girl Happy is not a Beach Party movie -- not only is it a different studio entirely, but it stars Elvis Presley! Still, it's about some young 'uns who head to Fort Lauderdale for Spring Break. Elvis falls for his boss's daughter, and once you've seen Shelley Fabares in action, you will too. While she doesn't possess Ann-Margret's volcanic sexual energy, she's a natural comedienne who plays the hell out a drunken striptease scene. Girl Happy is more frank about sex than the Frankie & Annette flicks -- indeed, it's also more open to letting its women have a good time, without judgment. I like that! Yay for proud strippers!

Disappointingly enough, Dr. Goldfoot and the Bikini Machine was dull. From the team that brought you the Beach Party films comes another Frankie Avalon-Dwayne Hickman adventure, this time going up against mad scientist Vincent Price and his army of robot beauties. Price is game, but it's oddly listless.