Cinema '65: A POW Camp and a Suicide Hotline

The nominees for Black-and-White Art Direction-Set Decoration (hyphen city over here) consist of a war film, a social drama, a Cold War thriller, a shipboard ensemble, and The Slender Thread.

In King Rat, a POW camp in Southeast Asia, more or less permitted to run itself with little interference from the Japanese camp commandants, becomes the setting for a dark comedy survival -- not just physical, but psychological. George Segal is the king of the title, a soldier who has never been more powerful and influential than he is as a hustler and black marketeer in the camp.

A Patch of Blue follows a blind white girl who lives with her perpetually drunk grandfather and abusive, shrill, racist mother. She escapes, when she can, to the park -- where she meets and falls for a black man, a writer, who treats her with kindness -- played by Sidney Poitier. It's the annual Film with a Social Conscience, but it's by no mean the only one -- look, too, to fellow nominee Ship of Fools, about passengers on a boat heading for Germany from Vera Cruz, which explores class, race, prejudice in general, Anti-Semitism in particular, sex...the whole human experience.

Poitier also stars in The Slender Thread, playing a student (!) working at a suicide prevention center in Seattle; Anne Bancroft plays a caller who has just taken an overdose of barbiturates. If memory serves, the film plays out in real time, and is quite thrilling to experience -- and it's always a pleasant surprise to see contemporary-set films nominated in craft categories. Apparently, it takes a Poitier to bring attention to such films.

Rounding out the list is The Spy Who Came in from the Cold, one of those sophisticated, slow, highly-watchable John le Carre Cold War thrillers in which spy Richard Burton goes over the Berlin Wall to...but no. Best to just watch the whole thing unfold yourself.

The nominees, after the jump.... 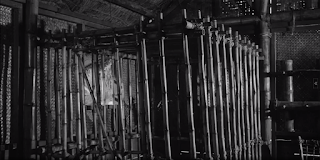 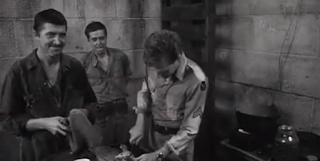 Robert Emmett Smith, art director
Frank Tuttle, set decorator
*****
A tough one to beat. An entire POW camp is created, complete with officers' huts, a walled structure housing enlisted, and the barbed wired bamboo gates housing the Japanese overseers. And then there are the different locales, like the pen for the hens, the supply room where the food is kept and weighed (cool and clay), the hill of doors to shit in. The basic needs to keep men alive and sane...or as much as possible.


A PATCH OF BLUE

George W. Davis/Urie McCleary, art directors
Henry Grace/Charles S. Thompson, set decorators
***
Gordon's apartment, shared with his brother: smooth, spotless, an abundance of comfortable places to lounge about -- but it is careful, impersonal. Selina's apartment, shared with her mother and grandfather: a single, cramped room, every stick of furniture peeling and cracked, dirty even when clean -- but you can't deny it says a lot about its inhabitants. 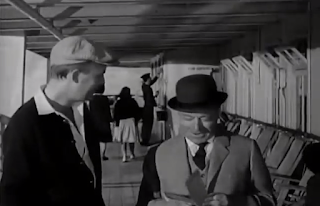 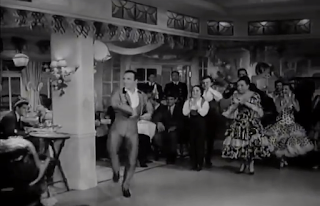 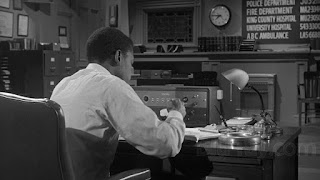 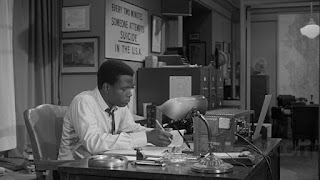 Hal Pereira/Jack Poplin, art directors
Robert R. Benton/Joseph Kish, set decorators
**
An interesting nominee, as these aren't necessarily the most notable of sets. Still, I assume the fact that every scene feels like it was shot on genuine locations -- from the call center to the phone company to the police department -- when they're probably sound stages, is reason enough for applause. They're so specific.


THE SPY WHO CAME IN FROM THE COLD 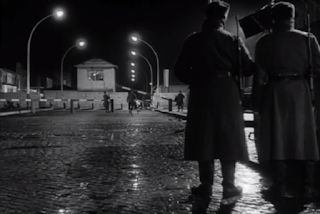 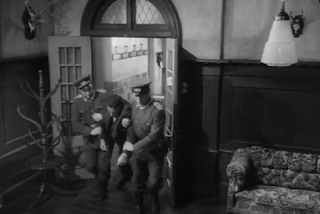 Hal Pereira/Tambi Larsen, production designers
Ted Marshall, art director
Josie MacAvin, set decorator
****
Nice touches, from the pro-workers propaganda in Claire Bloom's apartment (more than just the "Ban the Bomb" poster, you know) to the deer skulls decorating every wall in East Germany, becoming more and more apparent the higher up in the ranks we go. Let us look, too, to the construction of Checkpoint Charlie and the Berlin Wall -- a sinister banality.

Oscar chose Ship of Fools, but my vote clearly belongs to 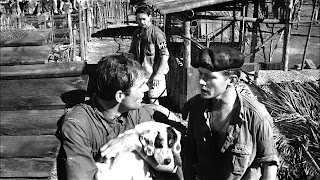 Email ThisBlogThis!Share to TwitterShare to FacebookShare to Pinterest
Labels: 1965, A Patch of Blue, King Rat, Oscars, Ship of Fools, The Slender Thread, The Spy Who Came in from the Cold