What an unusual group, these contenders for Best Original Screenplay!

Two of them are rather frank about sex: adultery, live-in loving, and homosexuality in Darling; impotence and kink in Casanova '70.

Two of them are comedies: Casanova '70, and the period ensemble screwballer Those Magnificent Men in Their Flying Machines.

Two of them are foreign-language films: Casanova '70, and the French musical The Umbrellas of Cherbourg, a romance that is completely sung-through.

Indeed, the only American one, The Train, is set (and was shot) in France -- a World War II thriller about art-thieving Nazis, the same tale that inspired The Monuments Men.

It's a bizarre group to see together -- but that's not to say it's an unwelcome group.

Take a look for yourself after the jump 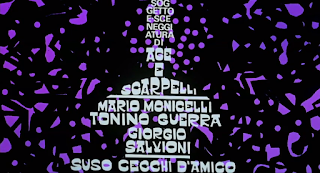 Agenore Incrocci/Furio Scarpelli/Mario Monicelli/Tonino Guerra/Giorgio Salvioni/Suso Cecchi d'Amico for Casanova '70
**
Amusing sex comedy, where a would-be lothario can only get it up when he's in mortal danger. Not enough material to justify the runtime, perhaps, but the dialogue is both genuinely funny and undeniably sexy -- Virna Lisi saying, "Disrespect me," is a hummina-hummina moment for the ages. How can one resist that trial scene? 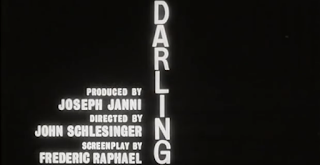 Frederic Raphael for Darling
****
I'm not sure about the frame element -- an interview for a biographical article. I mean, the very structure of the movie is not in keeping with it, and the movie itself seems to forget about it later on. That aside, it's a typically funny and hauntingly realistic Schlesinger film, with refreshingly frank and un-judgmental portrayals of homosexuality and general carnality. Bitchy fun, really.

Ken Annakin/Jack Davies for Those Magnificent Men in Their Flying Machines
***
Organically cues the slapstick moments, and while it does give in to the stereotypes of the sex-obsessed Frenchman, the uber-organized German, the brash American -- it's funny! And besides, each character is developed beyond those "types". Extra points, too, for the Sarah Miles character, a feminist written without condescension! Deeper than you'd expect. 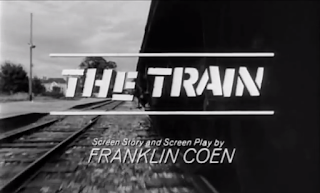 Franklin Coen/Frank Davis for The Train
****
Though they credit Rose Valland's non-fiction book, the script is undoubtedly an original, taking the true story of French art stolen by the Germans at the end of the war as a jumping-off point for a stellar thriller. A fantastic reverse of the usual action elements, as the plots to thwart the Germans start very large and complicated, before winding down into small and simple. Clever and carefully constructed.

Jacqies Demy for The Umbrellas of Cherbourg
*****
Difficult to judge from subtitles, perhaps, but I like how film's lyrics progress from the innocently simple romanticism of Part One to the more mature and poetic sense of loss and lost in Parts Two and Three. The subtle silliness of Mme Emery (you're in debt, now is not the time to get your hair done), the different expectations of Genevieve (who sends letter after letter and is hurt by Guy's silence) and Guy (who does not write often but is hurt when her letters become perfunctory), the groundwork laid for Madeleine. And all done so charmingly, romantically, sincerely!

Oscar went for Darling -- I mean, how could it resist? It's the only Best Picture nominee of the lot!

I'm going for the recitative of the French -- I vote: 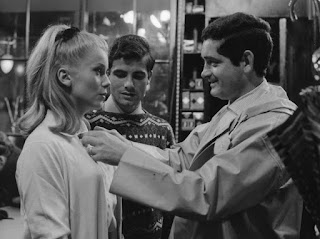 JACQUES DEMY
for
THE UMBRELLAS OF CHERBOURG

Tomorrow: our first look at The Sound of Music, a revisit of The Umbrellas of Cherbourg, the introduction of Cat Ballou and A Thousand Clowns, and the only time we'll discuss The Pleasure Seekers, maybe.