A Melody to Remember

Growing up in South Florida, what I knew of the Korean War was limited to reruns of "M*A*S*H*", a show that ran more than twice the length of the actual conflict. The few Americans I know who participated in that war do not tell the dramatic tales that are characteristic of those who experienced Vietnam or World War II. I confess, to many people I know, it's a "meh" war that is easily forgotten.

My own perception has changed greatly in the past year, mostly due to my frequenting CGV Cinemas in LA's Koreatown, which exhibits modern South Korean films in addition to hangul-subtitled American blockbusters. From The Piper, I have learned about post-war paranoia; from Ode to My Father, the toll it took on the generations that followed; from Northern Limit Line, the endurance of that conflict in modern times.

Now we have A Melody to Remember (aka Learning from Older Brother), based on the true story of a children's choir made up of war orphans. K-Pop artist Siwan leads as the lieutenant who organizes the choir, even making sure to incorporate local urchins who, until this point, have been stealing for the Fagin-like Hook (so-named because he has one, and played with surprising humanity by Lee Hee-joon). Ko Ah-sung, who played important roles in The Host and Snowpiercer, plays the caretaker of the orphanage on base -- and, of course, a possible love interest for our impossibly beautiful lieutenant. 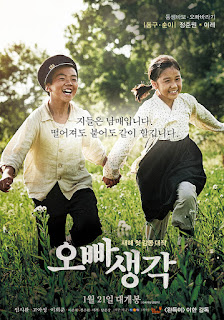 But the heart of the film is the brother and sister played by Jung Joon-Won (of the aforementioned The Piper) and Lee Re. Through their eyes, we are taken through every trial and tragedy that could happen away from the front lines. They learn Communist songs to fit in with North Koreans...only to see their father imprisoned when their village is once again under South Korean rule. They escape mob justice, they steal, they watch their friends get killed; with the choir comes a new lease on life, new hope.

You've seen enough films to know what you're getting into. Rough-and-tumble kids who don't trust each other, suddenly coming together when they learn to literally play together? We've seen this a dozen times over, but there's no denying the goosebumps that come when you hear these angelic voices in harmony. There's one scene where a child sings a song about home...then all the children join in...and outside, you see one of the soldiers leaning against a wall, eyes closed, mouthing the words to himself. Another scene where two rivals are forced to sing different songs opposite each other makes the heart swell. It doesn't feel cheap, either -- director Lee Han and writer Lee Woo-Tak have done a great job establishing the ensemble/setting/milieu up to this point (I think the choir doesn't come in 'til nearly 45 minutes into the film), that such moments are earned. Besides, if you didn't think you were going to shed a tear from the opening notes of the film's score, by God, you just can't take a hint. 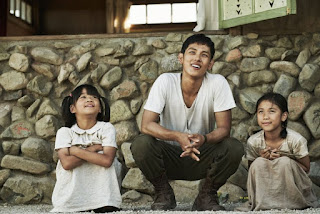 But this is a war film, after all, so there are surprising elements that I guarantee you haven't seen in any other family film. Like the threat of being sold into sex slavery. Or adolescent soldiers shot in the head. Or a man beaten to death with bamboo poles. War is Hell, and there's nothing to shield you from it. But there is something you can do to provide a little spark of comfort, to both yourself and the soldiers fighting it...like joining a choir.

Korean films don't get a wide enough enough release stateside -- that goes for the home video market as well as theatrical -- but if you like music, if you like stories of uplift, if you like seeing Siwan in a sweaty white tee, then try to find this film. It's so