And now - a visual feast! 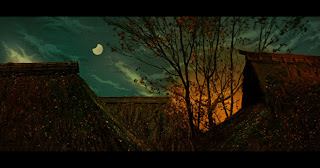 2. The Ballad of Narayama
Hiroshi Kusuda 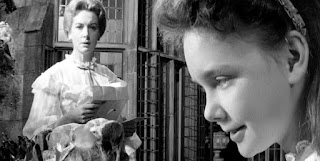 
The remaining eight categories after the jump...
Best Production Design 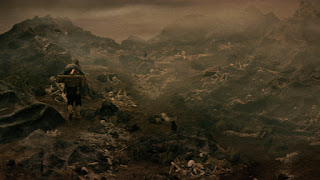 2. Flower Drum Song; 3. Claudelle Inglish; 4. A Majority of One; 5. The Human Condition: Road to Eternity

The Ballad of Narayama has a theatrical flair that I hear is meant to mimic kabuki theatre. I don't know enough to reflect on that, but what I do know is that the level of detail is insane. Backdrops are cut down to make day into night, interiors are rolled apart to bring us outside, every season is represented in all their colorful glory in the fields, the mountaintop is littered with skeletons amidst the fog. Surreal and effective.

In second, elegant homes and nightmare images in Flower Drum Song. In third, the small town and ramshackle home of Claudelle Inglish. In fourth, Jewish, Japanese, and general Western ideas of Eastern dwellings in A Majority of One. In fifth, the barracks and trenches of The Human Condition: Road to Eternity.

2. "Cruella De Vil" from One Hundred and One Dalmatians
music and lyrics by Mel Leven

3. "Let's Get Together" from The Parent Trap
music and lyrics by Richard Sherman & Robert Sherman 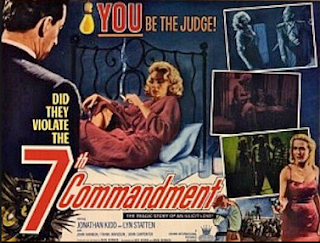 The Seventh Commandment stuck with me in ways many other movies screened for this year did not - a result, I'm sure, of its unusual story, which finds dishonesty, cowardice, redemption and something akin to holiness all within one man, without hypocrisy or force. In the end, it's about what desperate people do, whether it's for money, reputation, or hope.

In second, the gilded hopelessness of La Dolce Vita. In third, the selfless soldier and wartime wreckage of Ballad of a Soldier. In fourth, genuine hilarity and a not-too-condescending battle of the sexes in Bachelor in Paradise. In fifth, complex, aggravating people making terrible choices in Immortal Love. 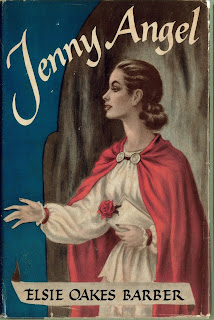 2. Judgment at Nuremberg; 3. The League of Gentlemen; 4. The Ballad of Narayama; 5. Saturday Night and Sunday Morning

Yes, both my screenplay wins go to films dealing with faith healers - but both do so in good faith! I love that Jenny Angel really is the product of a miracle, that the man who heals her is the genuine article; I love all the more that it's not enough that people receive the word of God, they want a show, dammit, and you better give it to them, because The Word alone sure ain't gonna pay the rent! And yet it's so empathetic to the sinners and the doubters, reserving its loathing for the people so determined to keep their bodies pure, their hearts have been corrupted; for the exploiters who may want to get into the Kingdom of Heaven, but not before making a profit off of it.

In second, the diverse experiences of Judgment at Nuremberg. In third, the heist with a stiff upper lip concocted by The League of Gentlemen. In fourth, the folk horror of The Ballad of Narayama. In fifth, the every day reality of Saturday Night and Sunday Morning.

2. Keisuke Kinoshita for The Ballad of Narayama; 3. Grigori Chukhrai for Ballad of a Soldier; 4. Federico Fellini for La Dolce Vita; 5. Jack Clayton for The Innocents

I already talked about why Robbins and Wise deserved their Oscars, so all that applies here. I just want to point out that the clip I wanted to showcase is the underrated "Cool", a number that is oft-imitated, but usually within the context of poking fun at "tough gang members" in a musical setting. But Jesus, look at this thing: Robbin's choreography, Wise's camera movements, the lights, the performances. Have you ever seen such a raw interpretation of grief's wild fury and youth's imitation of strength? By GOD!

2. Jack Soo in Flower Drum Song; 3. Bob Hope in Bachelor in Paradise; 4. Sydney Poitier in A Raisin in the Sun; 5. Vladimir Ivashov in Ballad of a Soldier

Almost from the moment he appears, you know Finney's performance is something special. He's not even the most attractive of fellas, yet there's an unmistakable sensuality, a cultivated lack of pretension that gives off pheromones despite almost certainly smelling of sweat, cigarettes, and stale beer. Is he as angry as the other angry young men of this generation - the Room at the Tops, the Look Back in Angers, and the like? Oh yeah, but he knows how to have a good time, too. There's a bit of danger in him - an exciting, sexy performance all around.

In second, Soo's Sammy Fong gets to be conniving and romantic. In third, Hope's Adam J. Niles goes hilariously from cad to helpful homemaker. In fourth, Poitier's Walter Lee Younger is big big BIG as he struggles to feel heard! In fifth, the not-so-simple innocence of Vladimir Ivashov's Alyosha. 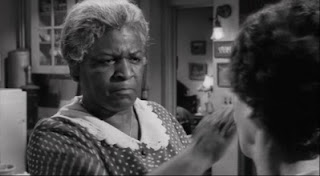 Claudia McNeil as Lena Younger
A Raisin in the Sun

2. Hideko Takamine in Immortal Love; 3. Deborah Kerr in The Innocents; 4. Kinuyo Tanaka in The Ballad of Narayama; 5. Miyoshi Umeki in Flower Drum Song

A tough choice between my top three. In the end, I gave the edge to McNeil for the ways she reveals new layers of Lena that only build our understanding of her history. She tosses off opinions that are actually steadfast declarations. She projects a guileless warmth that hides the exhaustion and frustration underneath, something that bubbles up increasingly as the play continues - slapping Beneatha, howling above Walter. McNeil makes us see just why this matriarch is the head of the family. And, more importantly, she lets Lena be wrong sometimes: petulant, tyrannical. Lena is real; McNeil is Shakespearian.

In second, Takamine's Sadako is increasingly bitter, often cunning - shockingly strong. In third, Kerr's Miss Giddens is afraid - and perhaps a little mad? In fourth, Tanaka's Orin is dutiful to a fault. In fifth, Umeki's Mei Li seems sweet and naive, but she's cannier than she lets on.

And there you have it - for only the third time in Hollmann Awards history (13 years, plus 17 Retrospectives), the Oscars and I agree on the Best Picture of the Year! West Side Story walks away with seven wins, Breakfast at Tiffany's and A Raisin in the Sun with two, and one apiece to Angel Baby, The Ballad of Narayama, Flower Drum Song, Mysterious Island, Saturday Night and Sunday Morning, The Seventh Commandment and Throne of Blood.