All About Eve (dir/scr. Joseph L. Mankiewicz) - Wittily written, genuine gasp-inducing turns, with everyone giving one of, if not the, best performances of their careers. A valentine to the theatre and the people who make it - yes, even as it remains clear-eyed about the egos and pettiness and manipulations, it still acknowledges the magic of it all. 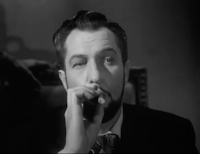 The Baron of Arizona (dir/scr. Samuel Fuller) - An intriguing bit of American history anchored by an "only he!" performance from Vincent Price. Come for the conman shenanigans, stay for the seductions, the unlikely friendships (the greatest heist was the friends we made along the way...), the lesson on how different inks are made. Never slacks! 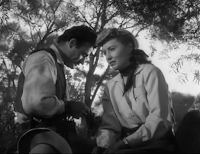 The Furies (dir. Anthony Mann, scr. Charles Schnee) - Barbara Stanwyck in slacks, flinging scissors at people's faces, poo-pooing pearls, plotting a high-stakes land grab, loving the right men at the wrong time and the wrong men at a convenient time. A thrilling film about greed and legacy, and of one woman's quest to conquer it all. 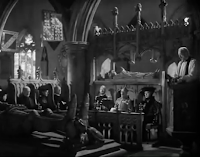 Kind Hearts and Coronets (dir. Robert Hamer, scr. Robert Hamer & John Dighton) - It's impressive what Alec Guinness does as the eight members of the d'Ascoyne family, so specific in his manner and speech that you could distinguish them all even without the makeup. But the makeup and costumes are great, and so is the hilarious screenplay, the performances from the ensemble, all of it. Dark and funny!

The Next Voice You Hear (dir. William A. Wellman, scr. Charles Schnee) - A modest movie that's not even about faith necessarily, but about the blessings inherent in life. Very moving, highly recommended.

Samson and Delilah (dir. Cecil B. DeMille, scr. Jesse L. Lasky, Jr. & Fredric M. Frank / treatment by Harold Lamb & Vladimir Jabotinsky) - I'm a sucker for a Biblical epic. In the hands of DeMille (and his screenwriters!), you get grand spectacle without sacrificing complex characterizations, humor and regret and lust and the natural foibles of man all mixed together, and even the "villains" are relatable - or, at least, witty - up to their Divine punishment. This is the most I've liked Victor Mature!

Sunset Blvd. (dir. Billy Wilder, scr. Charles Brackett & Billy Wilder & D.M. Marshman, Jr.) - Indelible imagery, characters, and plot, an inspiration for subsequent homages, rip-offs, parodies, and riffs from the time of its release all the way to now. Spooky, funny, ultimately heartbreaking. Is it noir, is it satire, is it a comedy, is it a drama? Yes, honey, all that and more! It's the ultimate film about Hollywood, a place obsessed with now but forever cannibalizing the ghosts of its past.

The Third Man (dir. Carol Reed, scr. Graham Greene) - Great mix of suspense and humor this year - that's certainly true of The Third Man, whose story of a writer coming to Vienna and faced with solving the murder and shady rep of his oldest friend is full of unexpected laughs and moments, from the runner of an imminent lecture to a Ferris wheel conversation full of such cavalier wit you can't help but laugh - both genuinely and nervously. Sticks with you.
Tomorrow, the nominees for the 1950 Retro Hollmann Awards! And just as a reminder, the full slate of titles considered for both that and this Top Ten:
Adam's Rib
All About Eve
Annie Get Your Gun
The Asphalt Jungle
The Baron of Arizona
Bitter Rice
The Black Rose
Borderline
Born Yesterday
Broken Arrow
Caged
Captain Carey, USA
Catskill Honeymoon
Champagne for Caesar
Cheaper by the Dozen
Cinderella
Convicted
Cyrano de Bergerac
Destination Moon
Fancy Pants
Father of the Bride
The Flame and the Arrow
The Furies
Gun Crazy
The Gunfighter
Harvey
House by the River
I'll Get By
In a Lonely Place
The Jackie Robinson Story
Key to the City
Kind Hearts and Coronets
King Solomon's Mines
Last Holiday
Louisa
Love Happy
Macbeth
The Magnificent Yankee
The Men
Mister 880
Mystery at the Burlesque
Mystery Street
Never Fear
The Next Voice You Hear
Night and the City
No Sad Songs for Me
No Way Out
Our Very Own
Panic in the Streets
The Red Danube
Rio Grande
The Rules of the Game
Samson and Delilah
Singing Guns
Stage Fright
Summer Stock
Sunset Blvd.
That Forsyte Woman
The Third Man
Three Came Home
Three Little Words
A Ticket to Tomahawk
The Toast of New Orleans
Treasure Island
Trio
Wabash Avenue
The Walls of Malapaga
The West Point Story
When Willie Comes Marching Home
Where the Sidewalk Ends
Winchester '73
Young Man with a Horn
You May Also Enjoy:
ZergNet
Like us on Facebook
Posted by Walter L. Hollmann at 6:25 PM

Email ThisBlogThis!Share to TwitterShare to FacebookShare to Pinterest
Labels: 1950, All About Eve, Gun Crazy, Kind Hearts and Coronets, Samson and Delilah, Sunset Blvd, The Baron of Arizona, The Furies, The Next Voice You Hear, The Rules of the Game, The Third Man, Top Ten