The 1950 Retro Hollmann Awards: Part One

Following are the first nine categories of the 1950 Retro Hollmann Awards - including Best Director, Best Actress, and Best Adapted Screenplay. Reacquaint yourself with the full slate of nominees, take a look at the Top Ten, place your bets - and then come right back here and proceed...
Best Costume Design 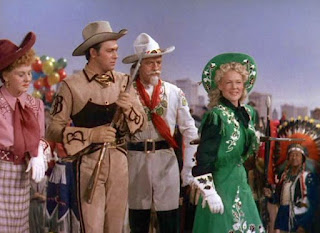 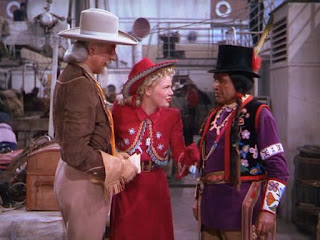 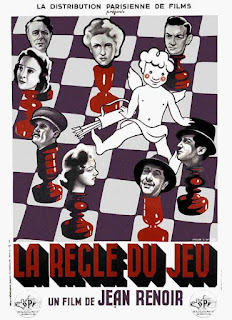 The Rules of the Game
Joseph de Bretagne, sound engineer
2. Annie Get Your Gun; 3. Young Man with a Horn; 4. Gun Crazy; 5. Winchester '73
Due respect to the mix of music, gunfire, and chatter that makes up the soundscapes of the other four, but The Rules of the Game often does all of those within a single sequence, everything happening on top of one another. The eerie stillness backgrounding the guns at the rabbit hunt makes for an uneasy mood, our first tingling that something is not quite right at this party. The chase through the party during the pageant, guns a-blazing, is a chaos both alarming and funny. And always, always conversation, the fades and mixing subtly drawing our attention to this bullet, that footstep, those whispers.
Best Cinematography 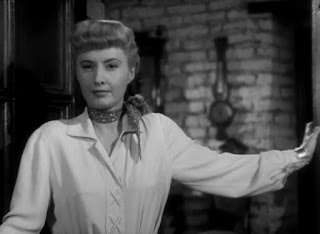 Barbara Stanwyck as Vance Jeffords
The Furies
2. Gloria Swanson in Sunset Blvd.; 3. Bette Davis in All About Eve; 4. Hedy Lamarr in Samson and Delilah; 5. Peggy Cummins in Gun Crazy
Stanwyck's line readings still ring in my ears, but so do her gazes. The unguarded hate for her father's new lover. The arrested brattiness of her pout. The not-entirely-familial love with which she gazes at her father. And the different lusts with which she looks at her respective lovers: friendship (and top) with Gilbert Roland, resentment (and bottom) with Wendell Corey. It's a performance - and role - that should be discussed among the greats.
Best Adapted Screenplay 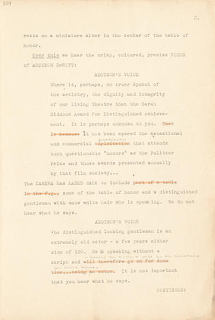 All About Eve
Joseph L. Mankiewicz
from "The Wisdom of Eve" by Mary Orr
2. The Furies; 3. The Asphalt Jungle; 4. Kind Hearts and Coronets; 5. Stage Fright
This was almost The Furies, but as much as I love that movie, there is an issue of clarity regarding the mechanics of plot and people's relationships. Not so All About Eve, which embodies that old creed for writers: Simple Plot, Complex Characters. There you have it. It's an ostensibly simple social climber plot that deals with its cast of neurotics with the respect due to people who aren't mean, necessarily, but fighting to maintain (or rise to) their position - Addison DeWitt excepted, of course, he really does seem like the evilest bitch. It understands stakes and people so that you feel the threat around Margo, but it never loses its sense of humor or sharp tongue. Affectionate, catty fun.
Best Film Editing
Gun Crazy
Harry Gerstad
2. The Third Man; 3. The Furies; 4. Stage Fright; 5. Sunset Blvd.
I really think I need only share the clip above, one of the greatest non-sex sex scenes I think I've ever seen in a movie. Horny and dangerous. The whole film moves like this, always exciting but never letting a cut take your eyes off the tension, sexual or otherwise, between its two main characters.
Best Director 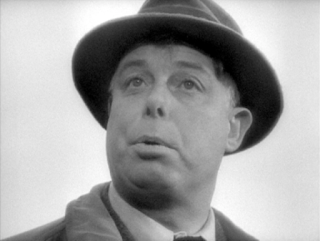 Jean Renoir
The Rules of the Game
2. Joseph H. Lewis for Gun Crazy; 3. Anthony Mann for The Furies; 4. Billy Wilder for Sunset Blvd.; 5. Carol Reed for The Third Man
I'm always impressed by the directors who can really nail an ensemble piece, juggling multiple characters and subplots without losing any sense of relationships, personalities, or geography. I'm impressed by filmmakers who can balance comedy and tragedy, sneakily intertwining the tones until one leads inexorably to the other. I'm in awe of someone who can not just see their writing through, but is so confident in knowing what he wants that he allows the cast and crew to "play" with dialogue and characterizations, chaos that should be unmanageable but which in his hands create something immortal, beautiful. Renoir...an artist.
Best Visual Effects
Samson and Delilah
Barney Wolff, special effects
Gordon Jennings, director of photographic effects
Devereaux Jennings / Paul K. Lerpae, special photographic effects
2. Destination Moon; 3. Annie Get Your Gun; 4. Three Came Home; 5. Treasure Island
The flames that destroy the house of Tubal and its surrounding environs. The storm that overtakes the Philistine army. The destruction of the Temple of Dagon, crushing the revelers beneath the idol. Three incredible sequences whose effects hold up to this day, filling us with awe...and fear, for the lives of the stuntmen!
Tomorrow, the winners for the remaining categories, including Best Actor, Best Supporting Actress, Best Score, and Best Picture of the Year!
You May Also Enjoy:
ZergNet
Like us on Facebook
Posted by Walter L. Hollmann at 1:49 PM

Email ThisBlogThis!Share to TwitterShare to FacebookShare to Pinterest
Labels: 1950, All About Eve, Annie Get Your Gun, Barbara Stanwyck, Cinderella, Gun Crazy, Jean Renoir, Joseph L. Mankiewicz, Retro Hollmann Awards, Samson and Delilah, The Furies, The Rules of the Game