Well, I managed to come up with a theme to tie in all the other non-nominated films I saw from 1936. That just leaves this final group of five. 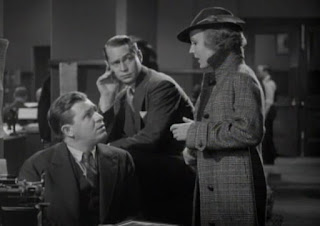 Exclusive Story
Crime flick. Italian gangsters horn in on the numbers racket in Harlem, the daughter of a shopkeeper they lean on goes to the papers, a lawyer who likes easy work reluctantly gets involved... A lot of moving parts, a gradual leading man, and an explosive climax. If you've seen a crime drama before, you know what to expect - hopefully, you're as much a fan of the genre as I am. Stu Erwin's in this one, too - and again, much better here than in Pigskin Parade. 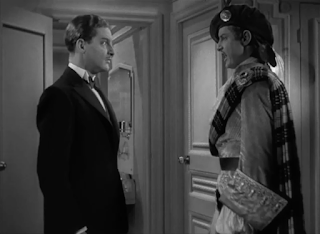 The Ghost Goes West
Scottish pussyhound is killed, cursed to roam his ancestral home until he enacts vengeance on his family's rivals; centuries later, his lookalike descendant sells the ancestral home to a Florida-based American family...and the ghost comes with the bricks. Time frame seems suspicious, as does the question of issue (wasn't the point that he was the last of his clan when he got killed? how does he have descendants?). It's not worried about that, though, it's worried about romance and fun, and on those points it succeeds. Robert Donat is the ghost and his great-great-whatever. Film stolen by Ralph Bunker as the American family's antagonist - they run a grocery store chain, you see, and Bunker runs their rival, but as happens in business, the two men socialize with each other often. Bunker's bitchy and fun - queer historians who may know better than I, is he one of Us? 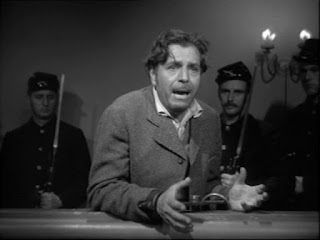 The Prisoner of Shark Island
Post-Civil War, Dr. Samuel Mudd helps a man who knocks on his door with a leg injury; turns out the man was John Wilkes Booth on the run from having just shot Lincoln, so Dr. Mudd is arrested and imprisoned as a conspirator. The film seeks to rehabilitate Mudd's image by portraying him as merely a doctor doing his duty, found guilty by a kangaroo court out for vengeance over justice. Because the thoughtful talents of John Ford and Nunnally Johnson are in control, though, they are able to acknowledge injustice without whitewashing Mudd, whose family was passionately pro-Confederacy. A scene near the beginning made me wince, for I thought it was trying to depict Mudd as, you know, one of those good slavemasters (though I did think it was amusing, too, its depiction of Northerners telling newly freed slaves about freedom and opportunity before beating back the same freedmen who argue with them). I should have known better, as his patronizing manner and use of (clearly dubbed-over) slurs shows that just because he's not a conspirator doesn't mean he's a hero. Fine performances from the whole cast: Warner Baxter as Mudd, Gloria Stuart as his devoted wife, John Carradine as a particularly vicious prison guard, Harry Carey as the warden. Perfectly shot by Bert Glennon. Nice to see a film about the Dry Tortugas, a place I visited as a young teen with my dad! 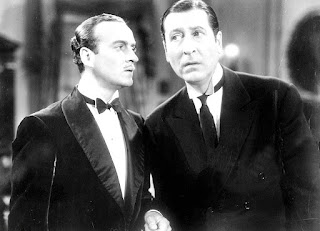 Thank You, Jeeves
My first Jeeves & Wooster experience - yes, I've never read the Wodehouse works, never seen the Fry & Laurie series, never listened to the Andrew Lloyd Weber musical, all of which seem like the kind of thing I've been doing for years, I know. But no, my first exposure to these beloved characters is one of those B-programmers, with a very good David Niven as the unworldly aristocrat Bertie Wooster and an OK Arthur Treacher as his devoted valet Jeeves. It is not that much more embarrassing than many other such films produced during the studio era, but there's a general listlessness, as though this were the 26th entry in a tired franchise instead of being the first of one that never got off the ground. 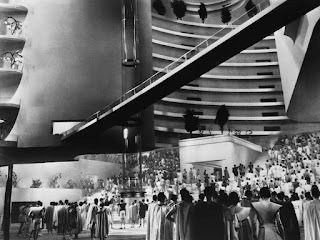 Things to Come
H.G. Wells' vision of the future, written for the screen by Wells, wherein a world war breaks out, Man returns to barbarism, a society of Betters saves the world, and all the Earth (apparently) becomes one technologically-advanced society with one more mission: TO THE MOON! I found the collapse of society and the reversion to little fiefdoms run by megalomaniacs in bad outfits too believable - and, after all, The Boss here isn't too different from characters like Aunty Enmity or Immortan Joe. I found the "rescue" of society by more open-minded, advanced people...I don't know. There was something chilling about their form of liberation, something antiseptic about their perfect society. I'm afraid I'm rather inclined to side with the brutes here. Ah, but visually, visually it's unparalleled! Sets, effects, costumes: seamless and imaginative and effective. Such scale!
Tomorrow, a quick review. And next week - the Retro Hollmann Awards of 1936.
You May Also Enjoy:
ZergNet
Like us on Facebook
Posted by Walter L. Hollmann at 2:45 PM