Well, people, I promised I would do it at the Diner, so here it is: Mary Shelley's Frankenstein.

Hopefully, I've corrected the error made by many filmmakers, who always want to make Victor and Friends much older than in the book. I'm skewing younger.

M. KIRWIN
Who is He: The magistrate who accuses Victor of the murder of Henry. Surprisingly sympathetic towards a man who may be a murderer.

My Choice: One day, everyone will know this man, and they will all love him.


M. KREMPE
Who is He: Professor of natural philosophy at Ingolstadt University. Thinks Victor is wasting his time, and publicly scorns him. Because that's awesome.


M. WALDMAN
Who is He: Professor of chemistry who inspires Victor to consider playing God. Not that it's Waldman's fault, since he does dismiss some of the things Victor suggests.


DE LACEY
Who is He: A blind man who comes to care for Frankenstein's monster, inadvertently teaching him to speak.

My Choice: Not English, like the rest of the cast; but then, neither was Frankenstein.


JUSTINE MORITZ
Who is She: A young girl adopted by Baron Frankenstein, only to be framed for William's murder by the monster, found guilty, and hanged.

My Choice: One of those actresses who refused to leave me alone: she was also in Pride & Prejudice.


HENRY CLERVAL
Who is He: Victor's best friend, he remains cheerfully optimistic despite overwhelming evidence pointing to imminent despair. He, too, decides to become a scientist! A welcome contrast to Victor's infinite moroseness.

My Choice: Soon to become one of my favorite actors of all time, I am sure.


ELIZABETH LAVENZA
Who is She: Another girl adopted by Baron Frankenstein, she is the beloved of Victor. And she loves him back. Very patient, despite the way Victor never pays attention to her unless he needs to be comforted.

My Choice: Apparently, England's answer to Sarah Michelle Gellar, since she stars in a programme called "Hex".

Christina Cole (Miss Pettigrew Lives for a Day, Marple: The Murder at the Vicarage)


ALPHONSE FRANKENSTEIN
Who is He: Victor's father, Baron Frankenstein. Has two biological sons, yet feels a need to adopt two girls and take in Clerval. Basically, Mia Farrow.

My Choice: Although it's basically the same role he played in Sleepy Hollow...

Michael Gambon (Harry Potter and the Order of the Phoenix, Gosford Park)


ROBERT WALTON
Who is He: Captain of an Arctic vessel, author of long-winded letters, and chronicler of Frankenstein's story. He finds Victor in the ice, nurses him, records his tale, falls in love, marries him, moves him into a lush apartment in Manhattan, and cares for him and their three children until old age sets in, whereby... Oh, hell, he's just not that interesting, is he? But I'm sure with the proper screenwriter, he could resemble something close to an actual human.

My Choice: For instance, if this handsome devil played him. 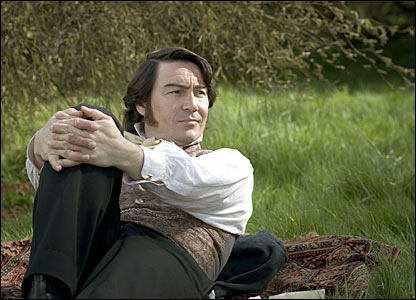 
THE MONSTER
Who is He: To quote Sparknotes: "The eight-foot-tall, hideously ugly creation of Victor Frankenstein. Intelligent and sensitive, the monster attempts to integrate himself into human social patterns, but all who see him shun him. His feeling of abandonment compels him to seek revenge against his creator." Lovely.

My Choice: Devilishly attractive, but goodness me, he has the acting ability. Look at his creature walk:


VICTOR FRANKENSTEIN
Who is He: Intelligent but unwise scientist who creates a monster, shuns it, and then becomes surprised when he turns out to be a little pissed about all this.