More Than Just "All Right"

I moved into a new apartment Friday, one where the internet won't be hooked up until August 22nd. Fortunately, I just arrived in my old hometown for a two week vacation, and my folks have their wireless up and running. Four days without internet almost killed me, I swear, and not just because I'm an addict who spends most of his time on this thing. No, I needed to get on my blog and talk about two great movies I saw this weekend.

First, I want to talk briefly about the more readily available one. Though in a limited release, The Kids Are All Right has the benefit of Recognizable Stars to up its chances of getting an audience. And thank goodness for that, because this movie deserves to be seen. The movie is light, but the performances are fully realized. It's strange, because this movie does bring out the ol' Hollywood tropes: big speeches, college looming, bad best friends, outsider charms way into a family. And a cynical person may be tempted to say that no one would praise this movie as much if it was about a straight couple who used a donor as opposed to being what some are calling a "lesbian issue film". 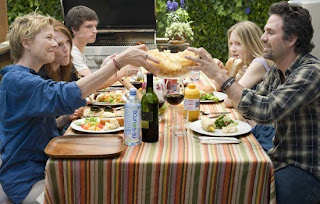 Relevant cinema! The horror!
But what's wrong with gays having mainstream issue films? Everyone else gets them. And if they're as good as The Kids Are All Right, can we have more, please?  This movie deals with families and marriage and growing up and the trust between spouses and the bonds between parent and child. These are universal themes that any family can appreciate and relate to. The parents here just happen to be women. And thank goodness for that, I say, for otherwise we'd be deprived some stellar work from Julianne Moore and Annette Bening.

That's what this movie is about, people. There's great direction from Lisa Cholodenko, and an admirable script by her and Stuart Blumberg. But this film is about the performances! Subtle, likable performances across the board! Annette has a great moment in Act Three that...well, it's really the basis of her inevitable Oscar campaign, isn't it? Julianne Moore charts this heartbreaking and relatable arc that kills me. Mia Wasikowska finally emotes and Josh Hutcherson makes me sorry he's not going to be Peter Parker. Mark Ruffalo? Best performance he's given since Zodiac. A solid ensemble all around, and best of all: it comes with a believable family dynamic! Hurrah!

Yeah, I highly recommend it, and I stick to my earlier predictions for Best Actress and Best Picture nominations. The film's that good.

And as for that other film I saw...well, that deserves a separate post!
Posted by Walter L. Hollmann at 12:16 AM

I really enjoyed The Kids Are All Right... except for the end. I didn't feel it at the end. The movie was great, but leaving Mark Ruffalo like that just did not feel right... or taking Mia to school was awkward and didn't really seem to serve any more purpose than to say, yeah the movie's over... get out of the theatre. But the majority of the flick was wonderful awesomeness and totally worth seeing.

I know what you're taling about with the internet - I'm having a nightmare... it has taken MONTHS to get connected. I swear I wish we just paid an internet licence and that was it - internet everywhere. Bloody businesses.

I hear a lot of people taking issue with the way the Ruffalo thing was resolved SPOILER FOR ALL READERS READ NO FURTHER IF YOU HAVEN'T SEEN THE MOVIE but I'm on board with it. He wasn't a bad guy, but he was kind of an asshole. And if you're not going to get a divorce, then you get rid of the invading element. For me, he deserves to be kicked to the curb because he called Annette's parenting into question. Was she strict? Yeah, duh. But it's not his business, because that's not his family. It's a necessary step, getting rid of him, but the movie's strength is that it makes him a nice guy who overstepped his boundaries and has to deal with the consequences.

Walter, a really thoughtful review of one of my favorites of the year. Yeah, I had a little issue with some of the plot devices...but you are absolutely right, this is a film that stands or falls on its performances, and they were each one terrific. As far as the resolution of the Ruffalo character, I did feel he was made into a bit of a fall guy, but you are winning me over with your analysis. Great review!

Hey Walter,
Making the LAMb rounds, decided starting at the bottom and working to the top was far more interesting for reasons I'm not sure I recall off hand, but suffice it to say I'm glad I found your site and have already added it to my feed reader. I caught this film, a rental because money these days and the cost of going to the theater, really?

I agree, a solid film with the same flaws you'd typically find in any other kind of ensemble film, kid going away to college, aging couple gets distracted by immediate and all-consuming affair. I wanted to see this film for Ruffalo who I think is one of the most under-used and extremely talented actors working today. Also for Bening but to be honest Julianne Moore leaves me disappointed these days (though she was marvelous in A Single Man). I liked the concept and thought it went well but could have been a little more - maybe grittier or less resolved in the end.

Great review though. Look forward to return visits. Do come by and see me at Above the Line.
cheers->
rory

The writing was good, and so were the performances. I just felt like this film could have done something so much better, whatever it was I still don't know. For me, I still have to say this was "All Right".