The week before I saw I Am Love, I wrote an essay for one of my lit classes linking the Erotic with Nature, noting the "mutual conversation" between the bees and the flowers in Their Eyes Were Watching God as the purest form of sexuality. Lo and behold, here comes I Am Love with a sex scene shot in closeups, intercut with, you guessed it, bees and bugs among the flowers, the leaves blowing in the wind, nature and sex together to create a perfect harmony, a pure eroticism. Contrast this pure outdoor tryst between Tilda Swinton and Edoardo Gabbriellini with the scenes of her at home, in her perfect dresses, everything perfectly arranged, the servants arranging the dish- and silverware carefully, all of it perfectly structured and sterile. We see Swinton and her husband together only once, in bed, barely touching, with their bed sheets still somehow perfectly smooth.

Taken altogether, this is a beautiful film about Swinton's character's liberation, yet we are never told that she needs this liberation. It's in the costumes, the Production Design, the cinematography, the performances. Vocalizing it is unnecessary. Instead, let us watch the family dynamics at play, the conflict between Traditional and Modern, the Oedipal undertones, the experience of sexual liberation for mother and daughter. And the food! Oh my God, this is Food Porn for anyone interested in such things! The prawns, the creme brulee, the Russian soup favored by Flavio Parenti's character! Everything looks so sinfully delicious, almost life-affirming! You can't blame Swinton's matriarch for having an affair with Gabbriellini's chef. So what if he's her son's friend? Passion knows no boundaries.

The attention to detail is just as evident in the characterizations by director Luca Guadagnino and his ensemble. There's Swinton's epiphany, of course, and Gabbriellini's earthy sexuality, and Parenti's naivete. But we also have the youthful independence of Alba Rohrwacher's daughter, the subtle snobbery and watchfulness of Marisa Berenson's grandmother, the bluntness and benevolence of Gabriele Ferzetti's grandfather, the loyalty and ruthlessness of Pippo Delbono's patriarch. Most especially, there's Maria Paiato's Eva, head housekeeper and the closest thing Swinton has to a friend. Like Viola Davis in Far from Heaven and Frances E. Williams in The Reckless Moment, Paiato crafts a loyal and intelligent woman who becomes a confidante, not through confession, but through observation. There is a beautiful moment where Parenti comes home in tears, but cannot find Swinton; instead, he breaks down in Paiato's arms, and the look on her face...well, I'll have more to say about Paiato later.

Everything comes to a head with a grand finale set to music by minimalist composer John Adams. Indeed, the film's entire score is made from John Adams music, but the music in the finale brings everything to an uplifting, arousing finish. Only one other film can equal I Am Love in its instrumental finale, but that's for another day. The point is, the way in which Guadagnino brings all the elements together in one final, pulse-pounding sequence only confirms what one already suspects: I Am Love is a symphony, an opera, a masterwork. No joke, no exaggeration, I've had about a month to think it over and everything. I Am Love has It. 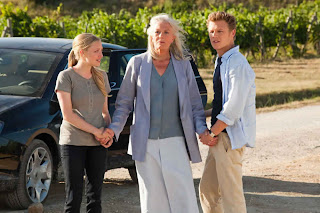 Surprisingly well-done! Amanda Seyfried is an American vacationing in Italy with her inattentive fiance (Gael Garcia Bernal). While there, she helps an elderly Englishwoman (Vanessa Redgrave) find the love of her life from 50 years ago, much to the consternation of her uppity grandson (Christopher Egan). Redgrave is magnetic as always, still beautiful, her eyes alternately registering eagerness and uncertainty. Seyfried is fine, though she sometimes overplays the Ignored Fiancee bit, so that you just want to walk up to her and say, "Hey. You're in an Italian vineyard. Stop. Sulking." How Bernal's character misses the pouts and crossed arms probably informs why he's not right for her, though he's not a bad guy. Like Burlesque, the movie actually lets you root for one guy without hating the other! Seyfried and Egan also kind of overplay the initial frustrations with each other -- their rudeness is less Meet Cute and more Awkward Family Dinner That Everyone Tries to Avoid. Ooh, but when the sparks fly between them, it's adorable! An enjoyable little film.
Posted by Walter L. Hollmann at 2:29 PM

Walter, you really nailed it with "I Am Love". Opera? You bet! I can't wait to see it again. Loved everyone in the cast, and was especially pleased to see Marissa Berenson on the big screen. The entire production was gorgeous.
(I wish I could read your paper. As a footnote, you might check out 1970's "Ryan's Daughter" for a hot love scene surrounded by the beauty of nature.)
I, too, really enjoyed "Letters to Juliet". The cast was attractive and talented; Vanessa Redgrave makes it look so easy!