Casting Coup Tuesdays: The Man Who Came to Dinner

DAY SEVEN OF HOLLMANN HOLIDAY EXTRAVAGANZA
Today's Holiday Casting Coup is one that I've always wanted to do.
Years and years ago -- I was probably still in elementary school -- I fell in love with The Man Who Came to Dinner. It's the story of popular radio personality Sheridan Whiteside, who arrives in a small town for a dinner with one of its bigwigs; I think it's a publicity thing or something. Anyway, on his way out, he winds up breaking his leg when he slips on some ice, forcing him to remain with his hosts. Only then do they realize that Whiteside is a temperamental, tyrannical, childish man prone to lobbing insults at anyone and everyone in his path.
Written by George S. Kaufman and Moss Hart, the original play was based on their experiences with their friend, radio personality, essayist, critic and founding member of the Algonquin Vicious Circle Alexander Woolcott. The legend tells us that Woolcott stayed at Hart's for a weekend and absolutely terrorized everyone, servants and family alike, even writing a note upon his leaving to assure Hart that it was "one of the most unpleasant times I have ever spent". Hart told Kaufman about the experience, saying, "Can you imagine if he broke his leg and had to stay?" Thus the story was born.
I was exposed to it, like many of you I imagine, through the magic of film. The 1942 film starred original Broadway star Monty Woolley as Whiteside, in one of those performances that audiences adore and critics appreciate, but divides the actual Hollywood people: Orson Welles (who later did a made-for-TV version) and Nathan Lane (star of the Broadway revival) thought Woolley's performance to be awful and misjudged, respectively. Actors. I disagree, but I can understand Lane's displeasure with the performance, thinking Woolley played it too mean. I get that. I love it, but I get it. Bette Davis, who played Whiteside's secretary marvelously, thought the direction was unimaginative, and was forever disappointed that first choice John Barrymore was too drunk to play the role.
Well whatever. Woolley is fantastic, and The Man Who Came to Dinner is a Christmas tradition in my house. My mother and I try to catch it whenever it's on, and TCM obliges annually. It's a true Christmas movie, taking place from the week before Christmas on through the 25th of December. Yes, friends, there's a Christmas Day finale, as well as a Christmas Eve radio broadcast featuring a boys' choir and several live penguins. The exchange of gifts plays a crucial role in the narrative, especially where it concerns Lorraine Sheldon and Aunt Harriet; if you don't know what I'm talking about, see the movie!
So, why recast something if I'm already a great fan of the original? Because (a) I would like to see a less mean-spirited Whiteside, and (b) that's what I do! Let me know what you think:


JOHN & SARAH
Who Are They: The butler and cook, respectively, of the Stanley Home. Long employed by the snobbish and tyrannical Mr. Stanley, they not only welcome the relief of Mr. Whiteside's company -- they positively dote on him.
My Choices: 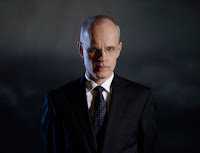 Zeljko Ivanek (Hannibal, In Bruges) and Cleo King (Dogville, The Hangover)
I like them is all. Cleo King is funny, and boy it would be a relief to see Ivanek at least smile. Without irony, I mean.
AUNT HARRIET
Who is She: Mr. Stanley's sister, a batty lady with a secret past who adores Mr. Whiteside.
My Choice: 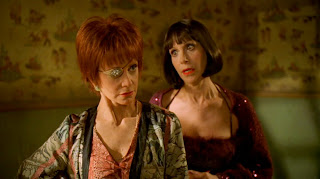 Ellen Greene (Little Shop of Horrors, Leon)
Greene can play crazy without going full Crawford. She also looks high-class, as Aunt Harriet should.
MISS PREEN
Who is She: Mr. Whiteside's nurse, a patient woman who finds it difficult to maintain her poise amongst her charge's verbal abuse.
My Choice: 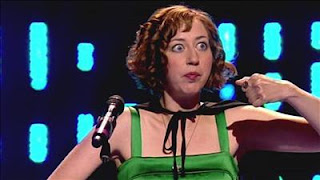 Kristen Schaal (Toy Story 3, Going the Distance)
Funny without being distracting, though she can deliver when it's her time to shine, which works for Preen's eleventh-hour speech.
DR. BRADLEY
Who is He: Local physician who wants Mr. Whiteside to help him work on his memoirs of being a country doctor.
My Choice: Golden Globe Nominee for Best Actor in a Musical/Comedy (Foul Play) 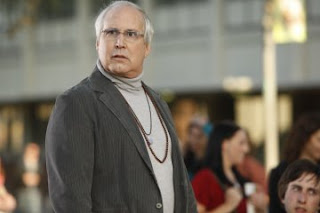 Chevy Chase (Caddyshack, Christmas Vacation)
His recent turn on "Community" only reminds me that he's still got it, and works well as a member of an ensemble.
MR. & MRS. ERNEST STANLEY
Who Are They: Hosts for the dinner Mr. Whiteside came to. It is their home where he breaks his leg, and it is their home where he is forced to spend his convalescence. Meek Mrs. Stanley does her best to keep everything pleasant, but Mr. Stanley is a bit cantankerous, resenting Mr. Whiteside's manners and his intrusion into their lives.
My Choices: He's an Academy Award Winner/BAFTA Award/Golden Globe Nominee for Best Supporting Actor (Adaptation), Indie Spirit Nominee for Best Male Lead (Lone Star) and SAG Award Winner for Best Ensemble (American Beauty).
She's an Academy Award/Golden Globe/Indie Spirit/SAG Award Nominee for Best Supporting Actress (Pieces of April) and SAG Award Nominee for Best Actress (The Station Agent) and Best Ensemble (The Green Mile, The Station Agent, Good Night and Good Luck) 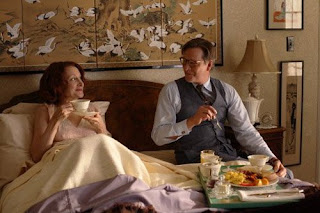 Chris Cooper and Patricia Clarkson (Married Life)
I love them. We know she can be harried, he can be domineering, and they can both be funny while doing it.


BEVERLY CARLTON
Who is He: A British actor/writer/songwriter (based on Noel Coward). A good friend to Maggie and Whiteside, especially Maggie; he tries to stop Lorraine, an old enemy, from getting her hooks into Bert Jefferson.
My Choice: BAFTA Award Winner/Academy Award/Golden Globe/SAG Award/Hollmann Award Nominee for Best Actor (A Single Man), SAG Award Winner for Best Ensemble (Shakespeare in Love), Hollmann Award Nominee for Best Supporting Actor (Easy Virtue) 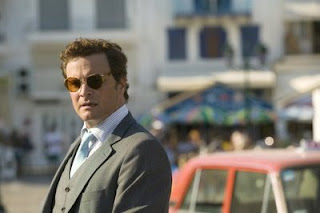 Colin Firth (Bridget Jones's Diary, Then She Found Me)
Funny. British. And a star, which actor characters should be. Do the math.


BANJO
Who is He: A friend of Whiteside's, crazy, ready with a joke, direct with women. Based on Harpo Marx, Banjo is a professional funnyman who also tries to stop Lorraine. 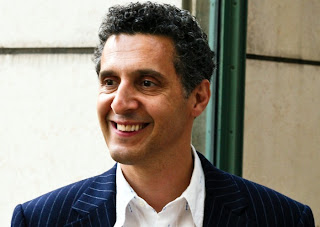 John Turturro (Do the Right Thing, Transformers)
Great actor who can do zany comedy quite well: look at O Brother, Where Art Thou, or even at his somewhat comic role in Quiz Show. He could do that Harpo leer, too!


BERT JEFFERSON
Who is He: Local reporter who Whiteside actually admires, since Bert's quick-witted and charming -- he's also an aspiring playwright. Bert takes a shine to Maggie, and she to him, sparking a romance that disturbs Whiteside. What will he do without Maggie's service? Sweet and funny, his good looks come straight from central casting. 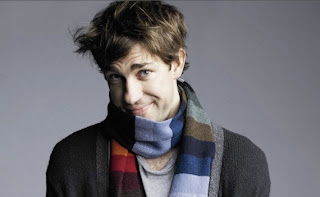 John Krasinski (Smiley Face, Away We Go)
Boyish and handsome, straight from central casting. Also possesses fine comic timing and wit. Also, I think we can imagine two women fighting over him. Man, what an under-appreciated talent.


LORRAINE SHELDON
Who is She: A pretentious actress with designs on a British lord. Shrill and irritating, she looks down on all those around her, except for Whiteside. Maggie hates her, especially when she starts to get her hooks into Bert Jefferson. A ruthless lush with sluttish tendencies. 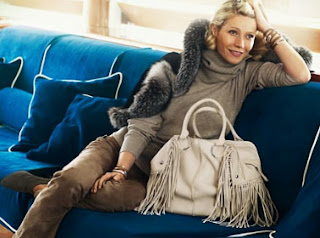 Gwyneth Paltrow (View from the Top, Proof)
Her recent stint on "Glee" reminded us just how hilarious she can be, and she could send up the perception of herself as a pretentious, holier-than-thou star. She seems like a good sport about those things. Lorraine is a high-class looker, too, and Paltrow, like her mother, just oozes with class.


MAGGIE CUTLER
Who is She: Whiteside's secretary, the only person who can successfully challenge him. He positively depends on Maggie, the woman whose whole life revolves around keeping his schedule in order and reading his thoughts. Maggie is tired, though, and when she finally sees happiness int he form of Bert Jefferson, she leaps for it. 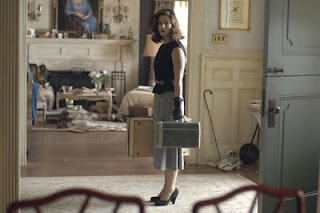 Drew Barrymore (TV's Grey Gardens, Going the Distance)
She's already ravishing in 1940s attire. An accomplished comedienne who has played these business-y types before (Never Been Kissed, Fever Pitch), Drew may not seem like the most obvious choice for a Bette Davis sub-in, but she's definitely the best for this role. Warm, funny, smart; she's got all the tricks she needs to play Maggie Cutler.


SHERIDAN WHITESIDE
Who is He: The man who came to dinner, a celebrated writer/essayist with friends on every continent, a friend of the president as well as convicted felons. He encourages joy and freedom in the servants and children, but is also a tyrannical man. He is not a mean person, but viciousness just comes naturally to him. Utterly dependent on Maggie, he tries to prevent her from leaving by inviting Lorraine over to seduce Bert. The man is brilliant, caustic, and funny...and one of my personal heroes. Based on Alexander Woolcott. 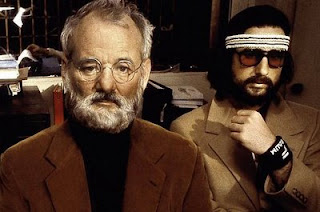 Bill Murray (The Life Aquatic with Steve Zissou, Get Low)
I feel like Murray's career has been a series of lovable cynics, men who aren't mean-spirited but naturally vicious. It's a difficult balance, but Murray's built his whole career out of it. He's funny and fantastic, and always generous to his co-stars. I don't know how much truth is in those reports of conflict on the Charlie's Angels set, but Murray and Barrymore are pros. He'd own this role, and he looks more like Woolcott than Monty Woolley.


Any ideas of your own? Got your own dream Whiteside in your head? Did I miss the mark with Lorraine (of course not!)? Are you a fan of The Man Who Came to Dinner? Let me know!
Posted by Walter L. Hollmann at 3:12 PM