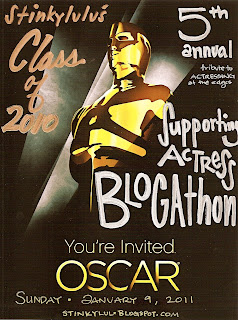 This post is my contribution to this year's Supporting Actress Blog-a-thon, hosted by the gracious StinkyLulu. This year celebrates the Fifth Year of this always-anticipated tradition, and I just want to say thank you to Brian Herrera for coming back, even if it's just for one day, to keep the tradition alive.

When I first saw Maria Paiato in I Am Love, I knew she would be my contribution to the Supporting Actress Blog-a-thon. A second look reminded me why I fell in love with the role in the first place. And then I saw Malcolm's beautiful write-up over at My Last Oscar and thought, "Aw, shit." I knew I wouldn't be able to do it as well as Malcolm, he just put it all so beautifully, especially in his analysis of the finale. With video! Be sure to read that, too, or first.

And yet, when I look at my list of Best Supporting Actresses, this is the one I want to talk about. So, sorry for the redundancy, but a great performance is always worth mulling over. 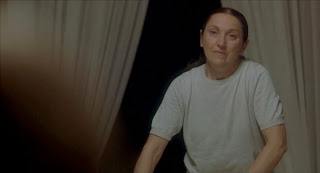 From her first entrance, we know two things about Ida, head housekeeper to the Recchi family. First, we know that she likes the Russian-born wife of the Recchi heir, Emma (played with great subtlety and urgency by Tilda Swinton); we can tell by their easy way of talking, by the silent looks they give each other throughout. Second, we know that Ida knows everything that goes on in the house, better than anyone else in family; we can tell by the fact that she's the first to know about son Edoardo's new girlfriend, informing Emma so that they may arrange the seating for dinner. To her, this is natural. She is the perfect servant, it is her job to know everything...even the things she doesn't know.

When Emma returns from her first rendezvous with Edoardo's friend, Ida is the only one in the house. She goes about her chores, ironing sheets, when Emma looks up and invites her to dinner. I love Paiato's face here. 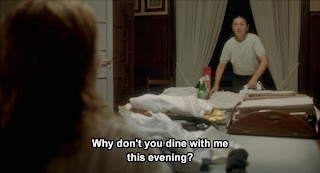 She's obviously caught off guard, but I think it's the same gob-smacked expression of flattery, and when Emma explains that it's because there's no one else home, her self-deprecating laugh and refusal breaks my heart. Of course that's why. She's just lonely. Ida returns to her maid face, but looks up again at the distracted Emma. Ida knows something is up,but there's also a trace of sadness there. I feel like she's wishing she hadn't refused, but it's too late to say anything now, and besides, that's just not the way things are done.

Her next big scene is comforting a sobbing Edoardo. Disillusioned with the way his father and business partners run the family company, Edo returns home to seek solace in his mother's arms; instead, he finds Ida, sits with her, and breaks down. I assume he did this before when he was a child, and surely Ida's been with them that long. You can see it by the way Paiato looks at him, with the affection and familiarity of a mother, but with the distance of an employee. And again, the surprise of his tears, followed by her having to mother him. 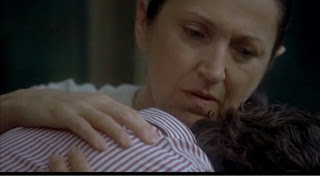 Paiato's mostly silent here, but her face and body language register everything. It's a nice contrast to the later hospital scene, when Betta finally arrives. She is the first to get up and rush to the girl's side, stopping just short of a comforting embrace. Instead, she stands aside when grandmother Rori and brother Gianluca rise to take on that responsibility. Ida just watches, and you can see that she wants to reach out, just as she was able to comfort Edo. 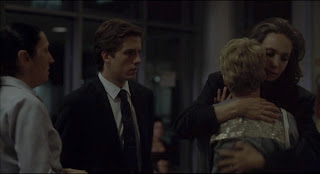 This is usually when most fans would talk about that big finale. I shan't, though, because there's something else I want to focus on. There's a scene where Emma is dreaming, and she hears a voice calling her by her Russian name, than a voice saying, "Emma. Emma." In her POV, it's at first a little girl...then, suddenly, Ida, waking her up like a mother would a daughter. 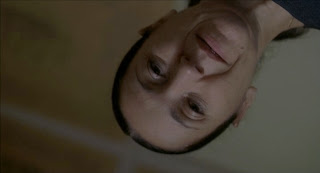 Cut to: reality. Ida walks in after this dream, calls Emma "signora", and wakes her up for real. It's a brief scene, mostly a wide, but it's important because of how Ida's character is presented to us. Emma, let us remember, was a Russian who the Italian Tancredi Recchi fell in love with and married, bringing her home; she has never returned to Russia, but she is still an outsider. Long before she begins an affair with the chef, she seems detached from things, though she does love her children. In various scenes, though, we see the affection between her and another outsider, the housekeeper. For her to dream of her servant calling her by her given names, a maternal figure, is significant. It establishes Ida as not just an employee, but the rock of this family. Edo goes to her, Betta almost goes to her, and now Emma wishes she could go to her; Ida, too, wishes there was something more she could do for Emma. 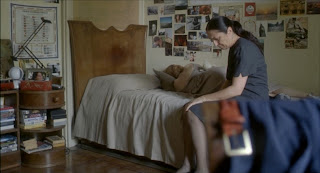 Paiato sells it. She is watchful, but not sneaky; loyal, but longing for more. Her face, her body language, everything tells us about this efficient, warm woman who has dedicated her life to taking care of people who see her as a servant. It's what makes this scene so resonant, the fact that Emma sees her as much more, and it makes that Big Finale all the more wrenching. Paiato's Ida is the very definition of a supporting turn, a true "actress at the edges", as StinkyLulu would say. In her subtle and beautiful performance, she gives us a complex portrait of a devoted housekeeper and friend. Remember Viola Davis in Far From Heaven, Frances E. Williams in The Reckless Moment, and Helen Mirren in Gosford Park? Well then you should remember Maria Paiato in I Am Love. She joins the Pantheon of Cinematic Servitude. 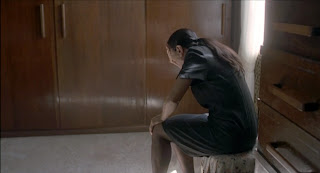 Email ThisBlogThis!Share to TwitterShare to FacebookShare to Pinterest
Labels: I Am Love, Maria Paiato, supporting actress

I'm really glad you picked her too.

At least I know I'm not the only one who loves her (because I thought I was crazy)!

Very nice analysis of a wonderful performance in a sumptuous film. I'm with you guys!