At long last...22 years of life...37 years of cinematic history....Ladies and gentlemen, the 1974 Hollmann Awards. No, there's no list of nominees to get acquainted with; it's all here, winners and runners-up, in one fowl swoop. First up, the technicals. Catch them after the jump:

UPDATE: Realized I hit publish before I made my final changes in Art Direction. The winner and runner-up have been switched so that the proper film is given its due.

4. Earthquake
Melvin Metcalfe Sr./Ronald Pierce, sound
It's really quite impressive, the intricacies of the sound work here. Everything, from the bar to the stunt ramp to the office, has to be destroyed visually and aurally. Good stuff.

3. Black Christmas
David Abbleby/Bill O'Neill, sound mixers
Ken Heeley-Ray, sound editor
This is here on the strength of those phone calls alone, wonderfully mixed to create some of the most unnerving scenes in cinema.

2. The Conversation
Walter Murch, sound re-recording
Arthur Rochester, production recordist
The movie is all about sound, and the buzzes, volumes and silences are suddenly much more important.

1. The Texas Chain Saw Massacre
Paul Harrison, sound re-recording
Ted Nicolaou, production sound recordist
Wayne Bell, post-production sound
Sure, that's not how spiders sound, but it's creepy, right? Every sound is calculated to take the audience out of its comfort zone, from that eerie whine opening the film to that sickening thud of Leatherface's meathammer. You feel crazy just listening to it. 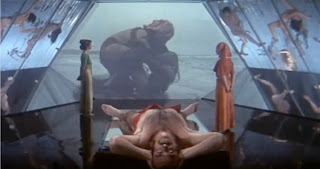 Anthony Pratt, production design
John Hoesli, set decoration
The Tabernacle! The Head of Zardoz! The delapidated library! The dining room of the Immortals!
4. Phantom of the Paradise 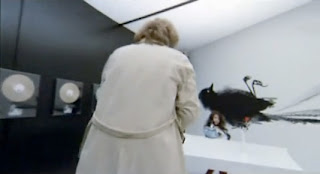 3. The Island at the Top of the World 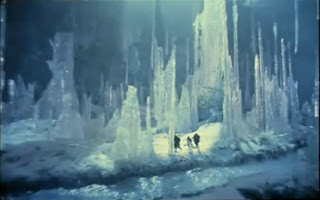 Peter Ellenshaw, production design
John B. Mansbridge/Al Roelofs/Walter Tylor, art direction
Hal Gausman, set decoration
Discussed it before. That airship alone is phenomenal, but I dream of the Whale Graveyard, the Ice Cave, the Temple...
2. Murder on the Orient Express

Tony Walton, production design
Jack Stephens, art direction
The glamour of 1930s travel is restored, right down to period-appropriate newspapers and cushions. Impressively meticulous work, all a part of the Movieness of the production. 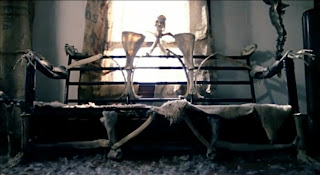 Robert A Burns, art direction
There is a sofa made of human remains.

Anthea Sylbert
Faye Dunaway's dresses are fantastic, but these are also the sharpest-looking men I've ever seen.

4. The Island at the Top of the World 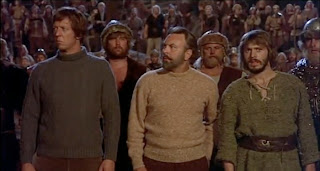 Bill Thomas
While Donald Sinden wears most luxurious-looking coats and furs, Mako's are clearly patched from the skins of different animals. The Godi's robes are as distinctively eeeeevil as Cardinal Richelieu's.  Even with coats and turtlenecks, you can tell whio went missing, who is practical, and who is Donald Sinden.

3. Phantom of the Paradise 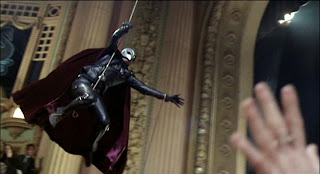 Theadora Van Runkle
Fabulous, dahling! At least something in this movie is exciting. Mame's many outfits are suitably stunning, and good job on choosing a sexy dress for Jane Connell!

1. Murder on the Orient Express

BEST ORIGINAL SONG
5. Mame
"Loving You"
Jerry Herman
The best thing to come out of this movie is this beautiful love song performed by Robert Preston halfway through. It's a simple beauty, and Preston really delivers.

4. Phantom of the Paradise
"Goodbye, Eddie, Goodbye"
Paul Williams
More than just a darkly funny opening number, this song sets up the obsession with celebrity and ruthlessness of the music industry. AND THAT'S WHAT THE MOVIE'S ABOUT.

3. Phantom of the Paradise
"Beauty and the Beast (The Phantom's Theme)"
Paul Williams
"To work it out, I let them in/All the good guys and the bad guys that I've been/All the devils that disturbed me and the angels that defeated them somehow/Come together in me now."

2. The Little Prince
"The Little Prince"
Alan Jay Lerner & Frederick Loewe
Tears. I love the line, "All the hopes and dreams I lived among/When this heart of mine was wise and young." It's a perfect summary of the protagonist's arc, a beautiful reminder of what used to come so easily....

1. The Odessa File
"Christmas Dream"
Andrew Lloyd Weber & Tim Rice
I like to think that this is the perfect way to open a film in which modern Germans deal with the guilt and anger left over from the Nazi regime. It's a call for a world that can one day live not only in peace, but at peace with itself. Then the German children sing.

BEST ORIGINAL SCORE
5. Murder on the Orient Express
Richard Rodney Bennett
The opening theme segues into a kidnapping scored by screeching strings. Later on, the orchestra builds energy as the train gains speed. Perfectly timed and elegant.
4. The Tamarind Seed
John Barry
It had me from it's opening theme, then proceeded to continue in its brilliance. The final twenty minutes just would not work as well without the music. The movie combines the spy thriller with the romantic drama, and Barry meets the challenge.

3. The Godfather: Part II
Nino Rota & Carmine Coppola
The same great theme we know and love, and more!
2. The Island at the Top of the World
Maurice Jarre
I love how weird and EPIC it all is. There's a feeling of the exotic throughout, and why shouldn't there be? What can be more exotic than a remote village untouched by time for centuries?

1. Young Frankenstein
John Morris
One of the most beautiful themes ever written for a film. Matches the Universal music perfectly. You'd never guess this came from a comedy.

BEST EDITING
5. The Texas Chain Saw Massacre
Larry Carroll/Sallye Richardson
Makes that awful dinner seem to last forever...and that's a good thing. Builds up the suspense and gets you squeamish before blood has been spilled.

4. Bring Me the Head of Alfredo Garcia
Dennis E. Dolan/Sergio Ortega/Robbe Roberts
Forces you to watch the horror of violence. Brutal.

3. The Conversation
Richard Chew
As Harry Caul begins to lose his grip, the cutting becomes more fractured, more jarring, more frantic. And before, when Chew knows just how long to linger, how much time should be spent following that single-take, when to see Caul's reactions (or lack thereof). It's magic.

2. Phantom of the Paradise
Paul Hirsch
Of course the bomb sequence, but I've always just been a huge fan of the editing in the Big Finale. Never misses a joke, a moment of tension, a chance to tear up.

1. Lenny
Alan Heim
Like Lenny's acts, the editing seems to come from a stream-of-consciousness, each scene from the past leading to a standup act and a remembrance from Honey of something else. It really makes the movie what it is.

Robert Altman/Joan Tewkesbury/Calder Willingham
from the novel by Edward Anderson
Provides a great base for the marvelous character work happening on-screen.

Blake Edwards
from the novel by Evelyn Anthony
Frustrating...and frustratingly true. Edwards keeps all his characters authentic so that we know: this could happen.

3. The Island at the Top of the World

John Whedon
from The Lost Ones by Ian Cameron
Great fun. Some great dvice people like to quote is, "Be the best you that you can be." The Island at the Top of the World listened. Unapologetic in its sense of fun and adventure, wanting you to marvel at the world as much as Whedon does. By God, it makes me yearn for an adventure into the Arctic myself!

Julian Barry
from his play
Warts-and-all story sans condescension. The standup acts are integrated seamlessly with the dialogue. Character-specific dialogue...you'd know who was talking even if you just read the words.

Mel Brooks/Gene Wilder
from Frankenstein by Mary Shelley and the Universal films
Again, I have to tip my hat to a movie that's simultaneously hilarious and moving, both a parody and an homage. It's a tricky balance, but Brooks and Wilder maintain it throughout.

4. The Conversation
Francis Ford Coppola
Clever in its red herrings, specific in regards to Harry Caul. Surprise twist makes sense with the rest of the script. Bouts of humor  are a hell of a relief.

2. Chinatown
Robert Towne
Fantastic mystery, classic characters, an exciting and original story, and an ending that socks you in the jaw. A masterpiece.
1. Bring Me the Head of Alfredo Garcia
Sam Peckinpah & Gordon Dawson
story by Peckinpah & Frank Kowalski
The opening makes you expect a south-of-the-border, B-grade revenge flick. Instead, it delivers a complex love story between a loser pianist and a prostitute. A well-executed bait-and-switch, and that's not the only twist it makes.
Posted by Walter L. Hollmann at 6:42 PM