We're winding down with only three categories to go! And have you ever seen technicals given so close to Best Picture? Only at the Silver Screening Room, folks, where we love you no matter what you do. Let's leave the flouncey, flowery speeches for writing awards, though, because this category's all about the visual spectacle -- IN COLOR!

John Bryan, production designer
Maurice Carter, art director
Robert Cartwright/Patrick McLoughlin, set decorators
***
The dark chambers of old are brought to dank life by this talented group. They don't try to glamorize the time, but instead get every exact period detail just so. It's sparse yet effective.
MARY POPPINS

Carroll Clarke/William H. Tuntke, art directors
Hal Gausman/Emile Kuri, set decorators
*****
From a messy children's room to a British bank to the rooftops of London to the street outside, everything is meticulously created on a soundstage by the Disney builders. Admiral Boom's ship-shape home, the changing of seasons, the terrifying alleyways...such a superb attention to detail in every scene!
MY FAIR LADY

Cecil Beaton, production designer
Gene Allen, art director
George James Hopkins, set decorator
****
The sets for Higgin's house, his street, his mother's house, the freeking Embassy Ball - excellent! I do think it's quite apparent that the outdoor scenes are on a soundstage, though, since much of the set dressing is not as detailed, and "all" the buildings look exactly the same. Shame, that. Still, quite a good job on the whole.
THE UNSINKABLE MOLLY BROWN

Preston Ames/George W. Davis, art directors
Henry Grace/Hugh Hunt, set decorators
****
It's certainly done right! From the ramshackle cabins to the garish red mansion, the path from rags to riches relies on Debbie Reynolds, the costumers...and the art directors. They do a wonderful job, really, especially in differentiating the styles between nouveau riche and anciens. The Titanic is clearly a set, and that's the fakest iceberg I've ever seen, but why quibble over one or two shots when we've got that wonderful mansion?
WHAT A WAY TO GO!

Ted Haworth/Jack Martin Smith, art directors
Stuart A. Reiss/Walter M. Scott, set decorators
*****
Nothing about this film is real, so just relax and enjoy the fantasy. These sets are meant to be SETS, and they clearly had a lot of fun here. Silent film shacks, nouvelle vague lofts, Sirkian mansions, art deco psychiatrist offices -- this film has it all and then some.
--------------------------
My Fair Lady won the Oscar, as it was performing a sweep. But friends, much as I love the film, there's another what ought to get the kudos. 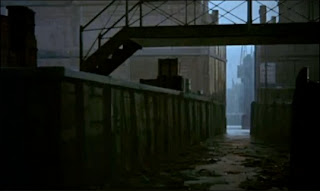 CLARKE, ET. AL.
for
MARY POPPINS
oh my God, they built that on a soundstage?
Posted by Walter L. Hollmann at 7:03 AM

Email ThisBlogThis!Share to TwitterShare to FacebookShare to Pinterest
Labels: 1964, Becket, Mary Poppins, My Fair Lady, Oscars, The Unsinkable Molly Brown, What a Way to Go