So it's all come down to this, has it? We are finally here, at the nominees for Best Picture. I have to commend the Academy on this one. All five of the films here are legendary, and deservedly so. It's a strong crop, probably the strongest group of nominees besides Art Direction - Color. True, I wasn't crazy for Zorba, but I can still respect it, you know? I have to say, though, I was not expecting it to come down to the movies it's come down to. Perhaps you realized it already, but I...I'm surprised. And I'm sure I'll be surprised by my final decision, too.

Once again, I have illustrated the contenders with my favorite scenes/moments. Enjoy.

Becket
****
One of my great surprises with this project came rather early: it was the first film I watched. And man, did it ever deliver. This dramatization of the friendship between Henry II and Thomas a Becket only has a general idea of the events, but I'll take a finely-crafted, well-told narrative over the truth any day (see also my adoration of Public Enemies). I'm always impressed by period pieces that seem fresh, exciting and still-pertinent; in Becket, much of the dramatic tension derives from the struggle between church and state. The actors are at the top of their game, starting with Richard Burton and Peter O'Toole in the lead roles. I rarely expect a period drama based on a play to excite me so with its shot design, but Becket certainly moved me in this regard. Oh, and it's fun. But then, with Burton and O'Toole in the leads, you must have known that.

Dr. Strangelove, Or: How I Learned to Stop Worrying and Love the Bomb
****
This fourth viewing finally confirmed a number of points for me. It's both hilariously absurd and scarily real, a testament to the strengths of script and direction. That said, it's pretty uneven -- the plane scenes get tedious sometimes, George C. Scott's scenery-chewing actually takes away from a lot of the comedy, Dr. Strangelove is just bizarre. Still, the fact that Strangelove, President Merkin Muffley and Group Captain Lionel Mandrake are all Peter Sellers just gets more impressive and impossible with each viewing. The contributions of cinematographer Gilbert Taylor and art director Ken Adam cannot be praised enough.

Mary Poppins
*****
I wish more movies could provide the wonderful balance Mary Poppins does. There's a time for fun, and a time for seriousness; you gotta loosen up, but you can't shirk responsibilities; Mr. Banks is too strict, but his children are too unfocused. Ok, so it has its heart and mind in the right place, but there's so much more: wonderful songs, brilliant effects that still impress, a game cast that delivers, watchable child actors! The fact that the whole thing was shot indoors -- on a soundstage! -- amazes me, constantly. I mean, really: this has a more perfect sunset shot than most outdoor films! Well, now that I think about it, that makes sense, since they could control it, but let's not allow that to distract from my main point: the Poppins. Wow.

My Fair Lady
*****
I. LOVE. THIS. MOVIE. Always have, always will. Look, I'll try to remain as unbiased as possible, but this is one of my all-time favorites, hands-down. It's gorgeously designed and fantastically acted. Yeah, it gets a little draggy, and those "outdoor" sequences are clearly on a soundstage (if only they had the matte painters of Mary Poppins!), and no matter how amusing Stanley Holloway's Alfie Doolittle is, his scenes are rather distracting and random. But are these not small prices to pay in return for the great triumvirate of Harrison/Hepburn/Hyde-White? For the Ascot Gavotte? For that Embassy Ball sequence, wherein Hepburn and the music are at their most beautiful? The film sends me in a way only a few others send me.

Zorba the Greek
***
I don't want to say I was disappointed, but I didn't love it. I don't have to love everything, and I know it's especially difficult when a film is as melancholy as this one, but I do wish I liked this movie more. Even more of a shame: I don't know why I feel such an emotional distance, since everything is well-done. It deserves all the praise it's received in its crafts, its direction, its acting. Perhaps it's my feeling that the savagery happens too suddenly. Perhaps it's my reluctance to accept the character of Basil, the colorless English gent who remains limp until the last scene. Maybe I just couldn't gel with Zorba. Whatever the reason, I just wasn't buying what they were selling.

Oscar loved itself some My Fair Lady...and I find myself torn between it and Mary Poppins. Both have equally great performances, scripts (even if My Fair Lady is just the stage libretto...it's a damn good one), costumes, cinematography. My Fair Lady has better costumes and songs, but Mary Poppins is better-directed with better sets. The heart wants what it wants, so...what does it want? I refuse to declare a tie, that's for sure, but it's so tempting. Ok, bite the bullet. The Oscar goes to... 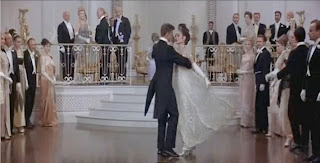 I haven't seen Zorba but on the merits of the other 4 alone this was one hell of a year for best picture. I've always had a big soft spot for My Fair Lady - along with its earlier incarnation Pygmalion. Though I think Leslie Howard was the better Professor Higgins, the power of Audrey cannot be denied - no matter how talented Wendy Miller was.

We somewhat part company here. I always thought "My Fair Lady" had some gorgeous moments, due mainly to its sumptuous, classic music score, the floral designs, sets and costumes. And yet there is something about the source material itself, embodied in the character of Professor Higgins, that alienates me. Its easy assumptions about class and gender make it hard for me to give myself over to its often considerable beauty. And it is so stage-bound, that I find this one of Oscar's least inspiring choices for Best Film...Sorry, I wish I felt otherwise.

Zorba is a film that demands a lot from the viewer, and seems like a positive slog after the relative ease of "Lady" and "Poppins"...No spoonful of sugar to be found! While perhaps not quite the best of the year, it is still a fascinating picture to re-visit.

Those voting for costune epics must have felt that "Becket" lacked the heart and humor of "My Fair Lady". As fine a film as it is, it didn't stand a chance...and the ending was a real downer.

My vote would be a hair-split between "Mary Poppins" and "Dr. Strangelove", both of which hold up as absolutely fresh today. I guess I would opt finally for "Poppins", due to sentiment, and the richness of the film itself in every department.