From the Brain to the Screen: Original Screenplay, 1964

Apologies for my absence and the long delay of my 1964 project. I'm keeping quite busy in my new hometown: filming in the desert, sprucing up a production office for a day, figuring out my neighborhood. It's all fantastic and fun, of course -- and I can't believe it's already been a month! -- but it do take time. Then, too, it's proving mighty difficult to find all the nominees from 1964, as many were never distributed for home viewing. Fortunately, I have friends like my roommates and The Oscar Completist who show me where I can get the hard-to-find. It is thanks especially to the latter that I can continue this project with the Original Screenplay category.

It's an interesting category this year, too, since the majority of the films here have been forgotten. I'd never heard of The Organizer, One Potato, Two Potato, Father Goose or That Man from Rio before I started this project, and only Goose and A Hard Day's Night saw nominations in other categories. Comedy dominates, with only one drama -- a look at an interracial marriage and the resulting custody battle -- getting a nomination. There are two foreign films, a star vehicle, two screwball comedies, an indie, and the Beatles. What a time! 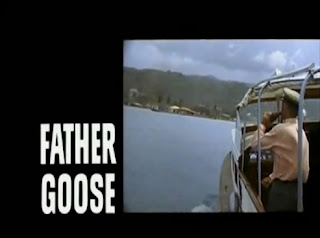 Just a freeking delight. A boozy American living in the Pacific Islands during World War II is tricked into staying on a lonely island to spot aircraft...only to wind up in charge of a group of schoolgirls and their sexy teacher. You read that synopsis and think "what the what?" yet the film really sells it. The screenplay takes its time with the romance between Father Goose and the teacher, building their relationship with each other -- and the children -- so that the climax is earned instead of rote. A little sexist at times, it at least allows for the idea that both its protagonists are flawed and need to adjust their ways. The dialogue just kills, too. Of course, the delivery by Cary Grant is what really sells it, but you gotta love exchanges like: "You stepped on my foot."/"You put it under mine." 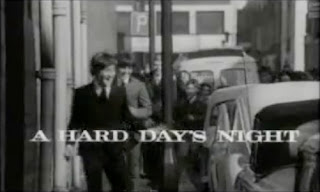 Vignettes are interrupted by great tunes, with the main plot thread being a televised concert special that serves as the film's climax (obviously, this was later remade as Spice World). Self-aware, nonsensical, madcap. I ding it a star because a large part of what's on screen is improvised, but Alun Owen did provide a strong framework on which they could build their puns and absurdities. The exchange between John Lennon and Anna Quayle is hilarious, and Paul's grandfather is such a bizarre creation that one must applaud all involved. 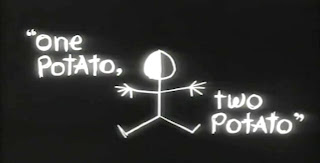 A white divorcee falls for and marries a black man; her racist ex-husband arrives to take custody of their daughter. Most of the characters are fully-realized, three-dimensional human beings -- even the ex is given an entire scene to himself where he battles with his conscious and pride. And there's no shying away from an ending that really is powerful and depressing. And they mean well. But while there's plenty of time devoted to the romance and the custody battle, not enough time is spent in the in-between. If the entire thing is framed by the idea that the interracial home is a healthier environment for the child than what her birth-father can provide, shouldn't we actually get to see her in that home? More time could be devoted to the characters as a couple instead of a symbol; see, while most of the characters are fully-realized, three-dimensional human beings...the leads are not! It could have been so much more... 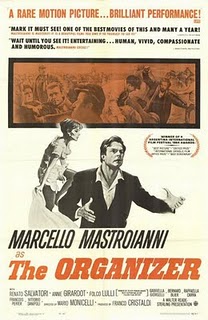 Mario Monicelli and Age & Scarpelli for The Organizer
*****

An engaging, angry, surprisingly funny ensemble film about a professor who organizes the mistreated workers of a textile factory. I felt like I came to know and love everyone at the factory, from fat Pautasso to mannish Cesarina to beautiful Bianca to the child whose name escapes me but who is the real heart of the picture. There is a fantastic scene in which he beats his little brother for doing poorly in school, chastising him for not bettering himself so that he can escape the dead-end factory life. I love the moments of lightheartedness that allow us to believe in these people as people, ones who have worked and lived together for decades. There is a true camaraderie, even when some of them disappoint and betray the cause. It's a beautiful film. 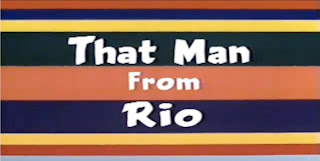 I'm going to hazard a guess that a lot was lost in translation. This tedious, unfunny French film, a precursor to the Indiana Jones and Joan Wilder films, follows a man as he tracks his fiancee's kidnappers to Rio, where idols, curses, gangsters and other stuff all come into play. The screenplay never shies away from the unpleasantness of its lead characters, clearly cynical about these adventure "heroes" of old. Still, it's an idea that I don't think is fully developed, especially since the film frequently goes from light-hearted romp to full-on zaniness without warning (he chases speeding cars on foot...twice). The indecision as to tone negatively effects a promising story, leaving us with a sketchy ideas ploddingly executed.

Father Goose won the Oscar this year -- deservedly so. I have to say, when it came to winners, they chose well this year. It helps that so much of '64's cinematic landscape was...lacking. Anyway, even though I love Father Goose, I will hand the trophy over to someone else entirely. 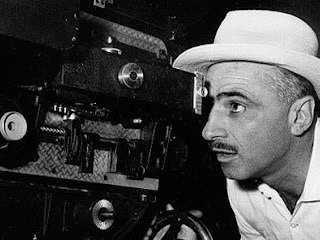 MONICELLI (pictured), AGE & SCARPELLI
for
THE ORGANIZER
you can be socially conscious and funny!
Posted by Walter L. Hollmann at 1:45 PM

Walter, I haven't seen "The Organizer" or "One Potato". TCM offers the latter on its web site. For some titles you might try Facets Multimedia, a terrific Chicago movie emporium: www.facets.org.
This was an interesting category; as usual, the screenwriters often selected out-of-the-mainstream films that deserved recognition but were unlikely to get a full studio backing.

I really enjoyed Father Goose...although I wonder if it won because it was the most widely distributed film, and the least obscure...(Oscar was unlikely to fully embrace The Beatles in '64).