I have officially begun watching the films of 1965. It's an interesting moment in cinema -- studio films are now more frank about the subject of sex, but there's still an Archie Comics kind of innocence abounding; meanwhile, foreign films are offering tits, tits, tits. I'm only 17 deep in my screenings so far, but my God there's a lot of sex talk in these films!

The Pleasure Seekers, for example, is all about sex, while still protecting the virtue of its supposedly experienced (?) leads. Billed as a musical remake of Three Coins in the Fountain, Ann-Margret is the only one of the trio who gets to sing, though one of these times is with the man of her dreams, a poor doctor who's fallen in love with her. Anyway, it's a bubbly, flighty, sometimes bizarre film -- about thirty minutes in, it's suddenly decided that Pamela Tiffin is playing "the dumb one", for example -- but there's also a surprisingly deft handling of the romance between Carol Lynley and her married boss. It helps that Brian Keith is one of the more naturalistic actors to grace the screen. The idea of three women coming to Spain to seduce men, then constantly balking at the thought of sex, doesn't always gel, but at least Ann-Margret gets to boff about. 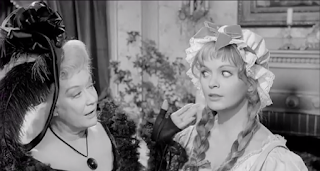 Now, as far as providing sexual shenanigans while still offering a virtuous heroine, the greatest bang (ha!) for your buck is Russ Meyer's adaptation of Fanny Hill: Memoirs of a Woman of Pleasure. Naive country girl Fanny never realizes that her charitable benefactress and mother figure is a madam slowly training her for the day Fanny will take customers. It's a cheeky, often hilarious movie -- I laughed out loud several times -- taking advantage of the bawdy bodice-ripping made mainstream by 1963's Tom Jones. Miriam Hopkins, a Best Actress Oscar Nominee for 1935's Becky Sharp, steals the film as the cunning yet soft-hearted madam, but let's not short shrift Leticia Roman's sweet, sincere rendering of Fanny, a character that very easily could have been frustrating to watch. She's charming in the role, never losing Fanny's sense of innocence, nor her surprising strength of character. A hero for the ages. 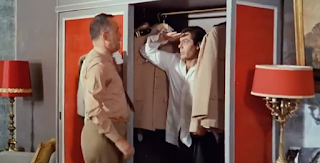 Meanwhile, in Italy, Marcello Mastroianni once again plays a man with sexual hangups, this time in Casanova '70. Nominated at the Academy Awards for its screenplay, the film follows a would-be sex god with an intriguing problem: he can only get it up if he's in some sort of danger. The different ways this manifests itself can be hilarious, but perhaps more laughs could have been gained with a shorter runtime -- the last third, featuring a murder plot and trial, offers a number of amusing sequences and bits of dialogue, but still begins to plod after a while. Give it points for genuine sexiness though -- I'm a great fan of Mastroianni's virginal fiancee convincing him to come to her room with the husky plea, "Disrespect me." 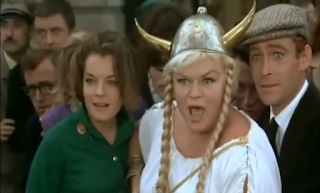 Speaking of Mastroianni, there's a hat-tip to his performance in 8 1/2 in the middle of What's New Pussycat? -- no surprise, as it's the screenwriting debut of one Woody Allen, who would pay homage to Fellini again and again in films like Radio Days and Stardust Memories. Now best-known for Tom Jones' titular theme song (which was Oscar-nominated), the film also deserves credit for showcasing Peter O'Toole's talent for comedy, as comfortable in Allen's verbal wordplay as he is in silly slapstick. BUT -- and keep in mind I've been watching Beach Party movies -- this has to be one of the clunkiest, most dated films I've ever seen. Peter Sellers is clearly out of control (though he does, admittedly, get a number of laughs); the rape, race, and pedophilia jokes are more squeamish than actually funny -- with the exception of O'Toole's "Don't focus on the negative" line; the film seems to made of two separate screenplays Frankenstein'd together. A disappointment.

Not a disappointment, though -- indeed, a pleasant surprise -- was A Rage to Live, a delicious melodrama in which Suzanne Pleshette becomes a nymphomaniac after her brother's friend forces himself on her. And it just causes trouble! Brett Somers calls her a slut; a rendezvous with a cabana boy basically kills her mother; she's incapable of being faithful to her husband; and her reputation even stains those with whom she is not intimate, like poor newspaperman Peter Graves! As Graves' suspicious alky wife, Bethel Leslie gets a lot of opportunities to side-eye, mutter insults, yell insults, and tipsily demand refills -- I love her, and I'm convinced it's her array of evening gloves, pearls, and posh gowns that earned the film its Oscar nomination for Costume Design. Listen closely and you'll hear the movie's theme song being played in one scene!

Don't think this is it for 1965 heat -- I still have those horny-yet-sexless Beach Party flicks to discuss! In the meantime, have y'all seen any of these films? What did you think?