The 1959 Retro Hollmann Awards: Part One

The 1959 Retro Hollmann Awards will be unveiled over a period of three days. 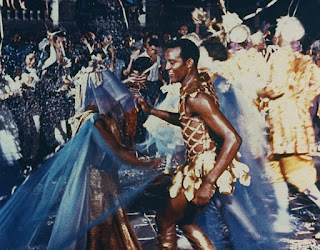 Everyone just looks so sexy, and that's before the party starts! The colors and designs that come out of the Carnaval costumes are the centerpieces: the veiled Eurydice, the armored (albeit in a way that still compliments his toned chest) Orfeu, the skeletal Death. It's breathtaking.

In second, the royal robes become part of the plot in Ivan the Terrible, Part Two: The Boyars' Plot. In third, the comic book colors - capital-c Costumes - in Li'l Abner. In fourth, the dresses fit for all shapes, sizes, and sexes in Some Like It Hot. In fifth, the fashionable gowns and practical housecoats of Imitation of Life.

All these films utilize rear projection at some point, but Journey to the Center of the Earth's come off more seamlessly, allowing the "dinosaurs" (made-up lizards) to be just impressive today as they must have been years ago. The effects go a long way to selling the scale of the journey: deep caves, endless mountain peaks, glittering crystals, volcanic eruptions.

In second, the battles, races, and miracles in Ben-Hur. In third, the supernatural effects, from leprechauns to Banshees, in Darby O'Gill and the Little People. In fourth, the explosive monster fights in Godzilla Raids Again. In fifth, the landmarks in North by Northwest.

Yes, the best editing of the year belongs to the three-and-one-half-hour epic The Human Condition: No Greater Love. Every cut is just right, at times jarringly going from a scene of quiet intimacy in the home to one of loud hostility in the prison camp. You think you see more than you do during a botched escape and its aftermath. The execution scene is above, and it's agonizing, perfect. Sometimes Uraoka doesn't cut at all, allowing a full scene with its actions, reversals and emotions to just play.

In second, the feverish energy of Ivan the Terrible, Part Two: The Boyars' Plot. In third, the action and visual double entendres of North by Northwest. In fourth, the unraveling mystery of The Crimson Kimono. In fifth, the languid gait of The 400 Blows.


1. The Five Pennies - "Lullaby in Ragtime"
music and lyrics by Sylvia Fine


5. A Hole in the Head - "All My Tomorrows"
music and lyrics by Sammy Cahn & Jimmy Van Heusen 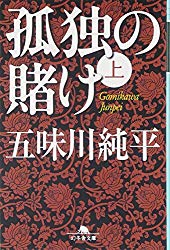 The Human Condition: No Greater Love
Zenzô Matsuyama & Masaki Kobayashi
based on the novel by Junpei Gomikawa

Insists on allowing its full, sprawling ensemble room to breathe, for each character to make his or her case for existence. Frank in its depiction of the grasping desperation of people surviving under a government with delusions of grandeur. Unblinking in its criticism of the Japanese government's subjugation of the Chinese, of its army's brutality in carrying out its perceived destiny, of a society's willingness to go along in the name of "patriotism".

In second, the turns and personalities of a murder trial in Anatomy of a Murder. In third, the journey from novice to person in The Nun's Story. In fourth, the difficulties of race relations and pulling off a heist in Odds Against Tomorrow. In fifth, the multi-generational lust of A Summer Place. 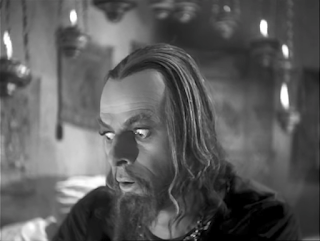 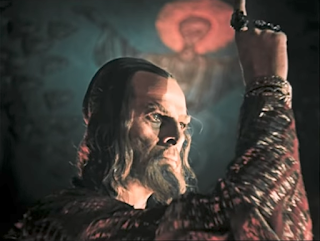 2. Tatsuya Nakadai in The Human Condition: No Greater Love; 3. James Stewart in Anatomy of a Murder; 4. Vincent Price in House on Haunted Hill; 5. James Shigeta in The Crimson Kimono

Nikolay Cherkasov continues the intensity and brilliance established in the first Ivan the Terrible. Madness and cunning share space within his eyes, gleaming whether he's anticipating the execution of a plot or furious at the perceived betrayals around him. He gets quieter moments here, too, moments that even surprise Ivan's most devoted followers, but Cherkasov shows a mind always at work, building defenses.

Email ThisBlogThis!Share to TwitterShare to FacebookShare to Pinterest
Labels: 1959, Anatomy of a Murder, Black Orpheus, Ivan the Terrible, Journey to the Center of the Earth, Nikolay Cherkasov, Retro Hollmann Awards, The Five Pennies, The Human Condition, The Nun's Story