Oscar '85: How To Make History Without A Nomination

Today, every distributor who can afford to do so sends screeners to Academy members for films that are "for their consideration." Wasn't always so: before, members had to attend special screenings in cinemas, presenting their membership cards for admission. Then and now, these screenings/-ers are, of course, in addition to the print ads in The New York Times, The Hollywood Reporter, The Los Angeles Times and Variety. Embassy Pictures could not afford these luxuries, but John Boorman could, so in order to get The Emerald Forest seen by Academy members, he made VHS tapes and made them available for free to Academy members at select rental outlets. And so, the first Oscar screeners were born.

The Emerald Forest, based on a true story, begins with an American family newly arrived in South America, the patriarch heading a construction project that's destroying the Amazon; when he takes his family to see the site, his son is taken by an Indigenous tribe known as The Invisible People. Ten years later, they finally meet again, though now the son has completely assimilated, the son of the chief, reluctant to return "home" with Dad. It's another Boorman winner, a thoughtful examination of colonial exploitation of Native lands and natural resources, a difficult fathers-son drama about defining home and family. Gone from the Oscar conversation since Deliverance, and two years away from his return with Hope and Glory, it would make some sense to honor this Boorman film; if not in Picture or Director, difficult fits for box office also-rans, then certainly in categories like Cinematography, Production Design, Makeup. 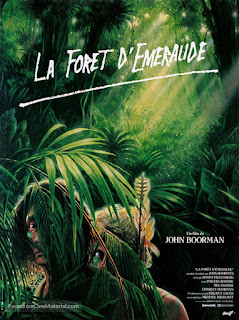 The strategy did not work then. It received three nominations at BAFTA (Score, Cinematography, Makeup) and one at the Césars (Poster). Still, it kicked off a way to reach voters that changed the industry forever. One-week qualifying releases that depended more on screeners and word-of-mouth than on an actual release include films like Still Alice, Biutiful, The Father, Minari. Screeners are also not just relegated to home video materials like VHS and DVD, but streaming links as well, particularly important in this COVID age.
So, The Emerald Forest made history but could not crack the crafts. Here are films that did, with special attention paid to films we won't get to discuss elsewhere:
Best Visual Effects 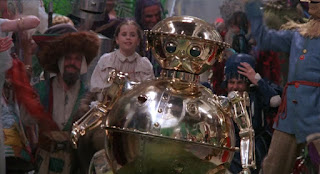 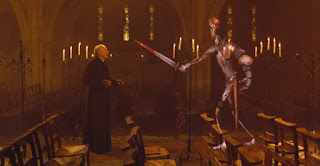 The winner was Cocoon, which we'll discuss elsewhere, beating Return to Oz and Young Sherlock Holmes. Oz is a continuation, naturally, of The Wizard of Oz, with Dorothy Gale finding Oz in ruins, ruled over by a multi-headed Mombi and the Nome King. Stop motion, blue screen, and practical effects come together to continue in the original's vein of unforgettable nightmare visions, most effectively done - they have to be, the film is so eager to get from setpiece to setpiece, it forgot its heart. Holmes imagines a what-if scenario with Holmes and Watson as classmates solving a supernatural mystery involving a secret cult and hallucinogens, the effects of which are portrayed by state-of-the-art CGI playing living desserts, tiny serpents, and a stained-glass knight come frighteningly to life, truly impressive moments in a competently dull film. For this category, all three are great nominees, though Cocoon boasting CGI UFOs and light aliens, so...
Best Sound Effects Editing
Back to the Future (oddly not a nominee for Visual Effects) is a great winner for this category - we'll talk more about it later. The other two nominees are Ladyhawke and Rambo: First Blood Part II. The latter was the second highest-grossing film of 1985, a sequel to the more staid, contemplative First Blood that turns John Rambo from PTSD victim to superhero, returning to Vietnam so that Americans - not the American government, because you can't trust the government, God knows - but so that Americans can see American soldiers obliterate anonymous, savage Asians in a revenge fantasy that is reprehensible in concept and execution. But we're talking about Sound Effects Editing and, God help me, it's a worthy nominee - I'll have the sound of the bow-and-arrow torpedo in my ears for years to come. Ladyhawke, meanwhile, is a dull fantasy whose screeching fowl and clattering swords and armor are, I guess, detailed enough to make it here, but I'm not in a hurry to re-watch and make sure.
Best Sound
Out of Africa won this category against a lineup that included the sci-fi Back to the Future, the musical A Chorus Line, and the western Silverado. The fifth nominee was none other than Ladyhawke, so there must be more to it than this untrained ear can recognize.
Best Makeup 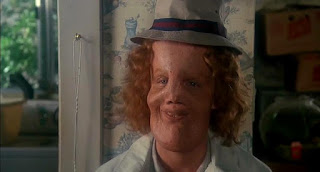 The winner is Mask, telling the true story of Rocky Dennis, afflicted with craniodiaphyseal dysplasia, spending about a year in his life as he goes to school, works at a summer camp, falls in love with a blind girl, and deals with his biker momma and both her nurturing and addictions. Michael Westmore and Zoltan Elek won for transforming Eric Stoltz into Rocky without his performance getting lost in the makeup; it's a straightforward, sensitive film, wonderfully acted. It won against The Color Purple, which ages its characters over 30 years, and Remo Williams: The Adventure Begins, an amusing action-comedy about a cop who becomes an assassin working for a top-secret organization; the nomination comes from turning Fred Ward with a mustache into Fred Ward without a mustache but with a better wig, and from turning Joel Grey into an elderly Korean.
Best Costume Design 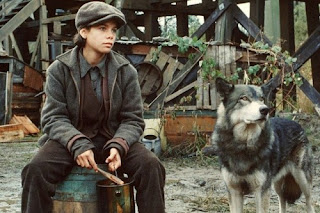 The 16th century displays of wealth and war in Ran won against The Color Purple (30 years of looks!), Out of Africa (turn of the century colonial wealth), Prizzi's Honor (snazzy, sophisticated, well-off threads) and The Journey of Natty Gann, whose dull-colored palette of Depression-era wools is an atypical nominee, but not undeserved. A serious drama about a little girl following her pro-union father to the Pacific Northwest, sometimes accompanied by a wolf with whom she has a spiritual connection, nothing is out of place in Natty Gann, not looks-wise, not story-wise, not performance-wise. The perils she goes through range from uncaring orphanages to union breakers to molest-y adult men - the stakes are high.
The nominees for Film Editing, Production Design and Cinematography all came from films we'll be discussing later. Indeed, starting tomorrow, as we go through Best Supporting Actor: Don Ameche in Cocoon, Klaus Maria Brandauer in Out of Africa, William Hickey in Prizzi's Honor, Robert Loggia in Jagged Edge, and Eric Roberts in Runaway Train.
You May Also Enjoy:
ZergNet
Like us on Facebook
Posted by Walter L. Hollmann at 3:36 PM