The leads of Singin' in the Rain came out in yellow raincoats to present the music awards, beginning with Original Song. The Color Purple was the only Best Picture nominee to make the cut, though I believe Kiss of the Spider Woman was also the only other Best Picture nominee to even have an original song. The other films nominated were Back to the Future, Richard Attenborough's tepidly-received but, to my eyes, very underrated adaptation of the Broadway smash A Chorus Line, and the Cold War dance drama White Nights - twice! Clearly, it was too good to deny:
But would I deny it? Let's find out:
Back to the Future - "The Power of Love"
music by Chris Hayes and Johnny Colla
lyrics by Huey Lewis
****
You know this song, it plays during the opening sequence where Marty skateboards through Hill Valley. Does it have any relevance to to the movie itself? I really don't care when I'm listening to it, it's fun, it moves with the action, we can all jam to it.
A Chorus Line - "Surprise, Surprise"
music by Marvin Hamlisch
lyrics by Edward Kleban
***
A new tune written for the adaptation of the Broadway smash about performers vying for parts in a new show, each telling their story of what brought them there, their experiences, etc. "Surprise, Surprise" is about losing your virginity in a graveyard and gosh, sex, it's great! Nice to nominate not some generic end-title tune, but an actual character moment - and Gregg Burge just sells it! By the way, I'm not really familiar with the show itself, but the film? I quite liked it, it's beautiful and frightening.
The Color Purple - "Miss Celie's Blues (Sister)"
music by Quincy Jones and Rod Temperton
lyrics by Quincy Jones, Rod Temperton and Lionel Richie
*****
Jones' third and final nomination for Song, second of three nominations for Richie
Speaking of character moments! Shug Avery's "I see you, and you're beautiful," ballad to Celie, performed to the subject at the opening of Harpo's bar and club, is a levitate-out-of-your-seat moment, the whole Celie and Shug relationship, what they mean to each other, what they do for each other, in one song. Probably the movie's best scene.
White Nights - "Say You, Say Me"
music and lyrics by Lionel Richie
**
third and final nomination
White Nights sees a Russian ballet dancer who defected to the United States suddenly trapped in Siberia teaming up for some kind of showcase with an American defector who wants out. Complex performances and real conversations about sociological issues in capitalist and Communist countries, with dance breaks! Lionel Richie's winning ode to the central male friendship serves as the "main theme," though I think I only heard it in the end credits. A hit, though I've never cared for it, honestly.
White Nights - "Separate Lives"
music and lyrics by Stephen Bishop
**
White Nights is also a love story - two, actually, though the main one, the one we care about, is that between Gregory Hines' American defector and and his wife, played by Isabella Rossellini. Music-wise, if you like this sort of thing, you might like this.
------------------------
Actually, I do think Lionel Richie deserves the Original Song Oscar - just not for "Say You, Say Me." My vote: 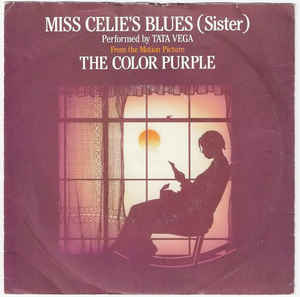 "MISS CELIE'S BLUES (SISTER)"
by
JONES/TEMPERTON/RICHIE
from
THE COLOR PURPLE
Gene Kelly, Debbie Reynolds, and Donald O'Connor remained to present Original Score, a slate that included three Best Picture nominees, the un-killable Agnes of God, and the new western Silverado. The winner was Out of Africa, its fourth award of the night on its march to Best Picture:
The nominees:
Agnes of God
Georges Delerue
*
past winner, fifth and final nomination
I'm sorry, this is the last straw. Besides an admittedly engaging performance from Meg Tilly, what did anyone see in this movie? A shockingly dull Delerue score, giving you the strings and vocals you'd expect from a Catholic-tinged melodrama, but no personality! I suppose that makes it an appropriate match for its befuddled, boring film, but a nomination seems much.
The Color Purple
Quincy Jones
& Jeremy Lubbock & Rod Temperton & Caiphus Semenya & Andraé Crouch & Chris Boardman & Jorge Calandrelli & Joel Rosenbaum & Fred Steiner & Jack Hayes & Jerry Hey & Randy Kerber
****
Jones' third and final nomination for Score, Hayes' second and final nomination for Score; Golden Globe nominee for Best Score
The largest number of nominees for a single film in this category. Quincy Jones gets solo credit in the film's opening credits, but he shares credit on individual tracks with the other eleven composers. It all sounds like one fluid composition, give it credit for that! The sweep of it is a great complement to the filmmaking; Jones' score proves that Spielberg intended this to be a capital-e Epic.
\
Out of Africa
John Barry
*****
past two-time winner, fourth of six nominations for Score; Golden Globe winner for Best Score; BAFTA Award nominee for Best Score
When I die, I want this played at my funeral. I told my sisters, I told my friends, I think it's absolutely magical. The score sounds like what Karen feels about her time in Africa, so transcendent you wish you could feel anything that makes the music of life do that.
Silverado
Bruce Broughton
**
first and only nomination
It's not bad, but nor is it atypical, with clear influences from Aaron Copland and Jerome Moross. The movie itself goes back and forth between great highs and somnambulist lows, surprising twists to all-too-predictable turns. I guess the score embodies that.
Witness
Maurice Jarre
****
past three-time winner, sixth of eight nominations for Score; BAFTA Award winner for Best Original Score; Golden Globe nominee for Best Score
I love that Jarre always adjusted with the times, and always produced bangers. His synth score for 1985's Witness is as perfect as his orchestral one for 1962's Lawrence of Arabia. It fits perfectly with this story of an urban cop in a pastoral setting - the synth is technology, yet the music produced feels so...natural, as though gifted by the wind.
----------------------------------------
Oscar and I agree, my vote goes to: 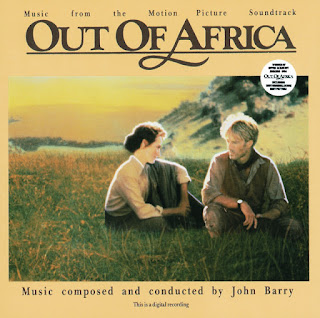 JOHN BARRY
for
OUT OF AFRICA
Next time, the nominees for Original Screenplay - Back to the Future, Brazil, The Official Story, The Purple Rose of Cairo, Witness - and Adapted Screenplay - The Color Purple, Kiss of the Spider Woman, Out of Africa, Prizzi's Honor, The Trip to Bountiful.
You May Also Enjoy:
ZergNet
Like us on Facebook
Posted by Walter L. Hollmann at 12:23 PM

Email ThisBlogThis!Share to TwitterShare to FacebookShare to Pinterest
Labels: 1985, A Chorus Line, Agnes of God, Back to the Future, Oscars, Out of Africa, Silverado, The Color Purple, White Nights, Witness