Many agree that the genre films of the 1980s are unlike anything that came before and cast long shadows over that which came after. This particular genre, horror, is a favorite of mine, and 1985 seems a particularly fertile year for it. Vampires and zombies, some fantasy (though I've saved pure fantasy for another day), a good balance of scares and laughs, here is the year in horror (going by US release dates). 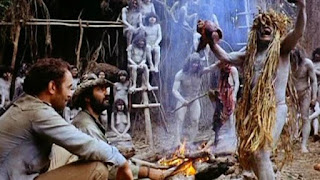 Cannibal Holocaust
dir: Ruggero Deodato
pr: Franco Di Nunzio / Franco Palaggi
scr: Gianfranco Clerici
cin: Sergio D'Offizi
A professor retrieves the lost footage of an American film crew that disappeared while deep in the South American jungle. It's one of my all-time favorite movies, and I say that with full awareness of the - how to put it? - yuckiness of the execution: the real-time, on-screen slaughter of multiple animals is gruesome, the stereotypes of  Indigenous "savages" reprehensible. So why do I love it? Just because of the poetic juxtaposition of Riz Ortolani's incredible score and the horror onscreen? For the impressive makeup effects that sees women impaled, men disemboweled, and everyone else's skulls cracked open? The "I can't believe I'm getting away with seeing this!" novelty factor? Sure! I also respect the hell out of what all of that is in service of, a film as concerned with its audience's appetite for gruesomeness as it is with portraying that gruesomeness as realistically as possible. The fact of these tastes is old news and oft-commented on, but I really believe that Cannibal Holocaust does the best job in both presenting the "entertainment" and challenging us for finding it so entertaining. It continues the essence of the mondo film cycle while including a Network-esque rebuke of modern media's sensibilities. Exploitation cinema it may be, but then what does that make the viewer - or, for that matter, the networks who crave such content under the guise of "news?" The filmmakers, the distributors, the audiences, the guides, even the critics who continue the conversation, all are in the business of exploitation, of shock, of goosing. And if Deliverance asked what, in 1972, could turn modern, so-called civilized men to brutal violence, Cannibal Holocaust asks whether the modern man isn't just looking for an excuse to inflict that brutality. 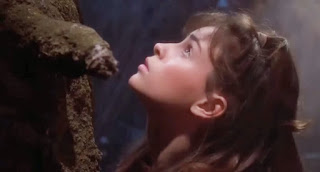 The Company of Wolves
dir: Neil Jordan
pr: Chris Brown / Stephen Wolley
scr: Angela Carter and Neil Jordan
cin: Bryan Loftus
A girl has a very lucid dream about werewolves in this riff on the Red Riding Hood tale. The "oh, it was all a dream," conceit is one that can hold the audience at a distance, but here, it's the whole magilla, reframing the events of a gothic horror story as the fantasies of an adolescent girl beginning to question who she is, where she belongs, and what she desires. In that context, the suspense is more thrilling, the complicated magnetism of the werewolf more dangerous, the dreams-within-stories-within-dreams layering more complex, as it's all addressing burgeoning sexuality and the whole mess of dealing with it, a serious, full-length version of Tina Belcher's horny zombie dreams. Impressive, the way it maintains the dream element throughout: we get lost in its story even as the sets, edits, and cinematography remind us that all of this is occurring in someone's head. 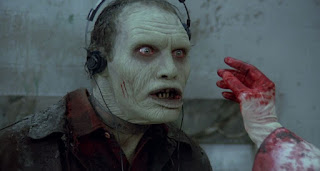 Day of the Dead
dir/scr: George A. Romero
pr: Richard P. Rubinstein
cin: Michael Gornick
The third entry of Romero's Dead franchise takes us to my home state of Florida, as scientists and soldiers hunker down together in an underground (?) facility and fight each other with regards to how to deal with the zombies outside and in (they're experimenting, you see). Gore galore, though it gets a bit muddy, even repetitive, in its required observation over people as the real monsters, etc. Still very cool.

Fright Night
dir: Tom Holland
pr: Herb Jaffe
cin: Jan Kiesser
Horny teenager who loves late-night horror movies realizes his new next door neighbor is a vampire. Plays its hand so strongly in the first half-hour, there's no way it can keep up the suspense and humor...or so you think. There's a lot more going on here, though, a loss of friendship, innocence, and identity that makes it a wonderful companion to The Company of Wolves. Chris Sarandon is dangerously sexy as the undead villain, a seductive presence not only for the women in the cast, but the men, too: he knows he can target the outcast Evil Ed (an unexpectedly tragic character and performance) for his feelings of being "different," his manservant inspires an equal devotion on his side, and our fatherless hero is not so aggressively hetero as to completely sidestep the question of what it is that so mesmerizes him. Is Sarandon an example, a teacher...or that forbidden unlocking of not-strictly-straight desire? And then there's Roddy McDowall, delivering a great performance as a horror ham becoming a real-life hero, mincing against the menace.

Lifeforce
dir: Tobe Hooper
pr: Yoram Globus / Menahem Golan
scr: Dan O'Bannon & Don Jakoby
cin: Alan Hume
An alien lifeform is brought back to Earth and, wow, it's a sexy energy vampire! The scale is unbelievable: massive spaceships of organic matter, London on fire, mummified humans screeching and clawing en masse. You can mute the film and stare slack-jawed at its visuals, as simultaneously beautiful and horrifying as its central villainess. 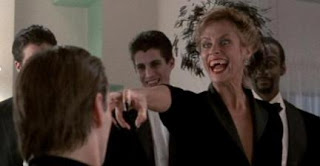 Once Bitten
dir: Howard Storm
pr: Frank E. Hildebrand / Dimitri Villard / Robert Wald
scr: David Hines / Jeffrey Hause / Jonathan Roberts, story by Dimitri Villard
cin: Adam Greenberg
Horny teenager is seduced by cougar vampire. Would make a good double feature with Fright Night! Cleavon Little as the vampire's G.B.F. is a gas, and what gay panic there is in the film feels...I don't know, I can only speak for myself, but it felt more organic than offensive to me, more indicative of the POV of the characters than of the filmmakers (maybe it's because Little's performance is so effective that I can defend the rest of the film so?). It's genuinely funny, wonderfully acted, great soundtrack. 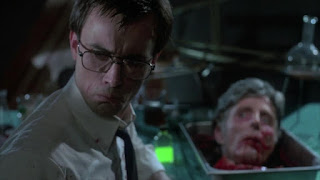 Re-Animator
dir: Stuart Gordon
pr: Brian Yuzna
scr: Dennis Paoli & William Norris & Stuart Gordon
cin: Mac Ahlberg
A medical student's roommate experiments in bringing the dead back to life, with gross results. Pushes the boundaries of taste many a time, and you either dig what it's up to or you don't. Jeffrey Combs' performance is the reason to watch. 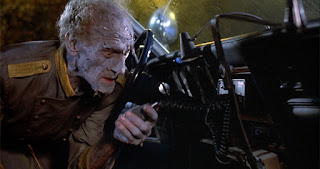 The Return of the Living Dead
dir: Dan O'Bannon
pr: Tom Fox
scr: Dan O'Bannon, story by Rudy Ricci & John A. Russo & Russell Streiner
cin: Jules Brenner
An unlikely group battles zombies. Like many comedies, probably the truest depiction of how people would react in this situation: sidestepping blame, absolutely baffled, offhandedly destructive. Not only that, it recognizes how mutual connections in a small town link the unlikeliest people together, so that punks and preps alike find themselves in the same clique. Realistic and reasonable, and responsible for some of the greatest scenes in the zombie subgenre: the half-corpse's horrifying confession of why they hunger for brains, the intentional plotting by the undead to lure and swarm unsuspecting victims, and a moving suicide by someone about to turn. And again: bangin' soundtrack. 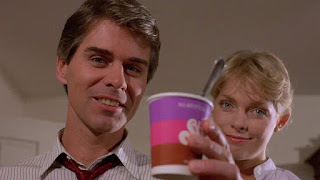 The Stuff
dir/scr: Larry Cohen
pr: Paul Kurta
cin: Paul Glickman
Larry Cohen takes on consumerism and fad culture in this tale of a mysterious food product that enslaves humanity. Fun and nerve-wracking, and while it's linked to the food industry specifically, you do see, don't you, how much of modern fan culture operates this way, demanding a hive-mind approval and pummeling anyone who steps out of line? Golly. 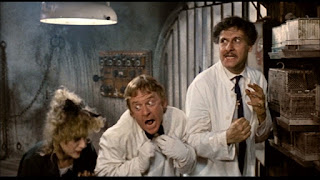 Email ThisBlogThis!Share to TwitterShare to FacebookShare to Pinterest
Labels: 1985, Cannibal Holocaust, Day of the Dead, Fright Night, Lifeforce, Once Bitten, Re-Animator, reviews, The Company of Wolves, The Return of the Living Dead, The Stuff, Transylvania 6-5000