It's only been one week since we closed the books on 1950 but, here we are, ready to journey through the films of 1935! A year where the short-lived category of Best Dance Direction was introduced (bring it back!), one winner wasn't even nominated (huh?), and the number of nominees per category could be anywhere from three (as with Best Song) to twelve (as with Best Picture)...
Best Sound Recording, for instance, had nine nominees, one from each of the studios operating at the time.

As far as I understand, each studio was automatically nominated, with their studio sound departments and department heads nominated instead of individual mixers/designers/editors. How the studios chose the one film to represent their entire year's body of work, I don't know, but it made for a varied slate of films. In addition to Best Picture nominees Captain Blood, The Lives of a Bengal Lancer and Naughty Marietta (the eventual winner), as well as the thrice-nom'd melodrama The Dark Angel, we have:
As for that first point - for the second and last year, the Academy allowed write-in candidates if the voters disagreed with the choice of candidates on their ballot. Such a thing was implemented the previous year when Bette Davis failed to make the official nominations for Of Human Bondage. It was repeated to entice members to vote and attend, as there were multiple guild strikes happening at the time of the awards. For the first time, the accounting firm Price-Waterhouse was hired to tally the votes, and during the ceremony, in addition to the winner, second- and third-place finishers were announced. That's how we know Paul Muni in Black Fury wasn't nominated but still came in second. Even crazier, it led to the only write-in winner in the ceremony's history: A Midsummer Night's Dream for Best Cinematography. 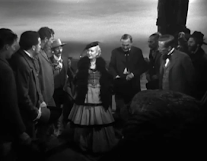 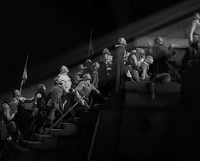 The "official" nominees it defeated included Best Picture nominee Les Miserables, plus:
Now, as for that first point, the category of Best Dance Direction... Actually, let's get into it tomorrow, when we can look at all the nominees individually: Busby Berkeley (Gold Diggers of 1935), Bobby Connolly (Broadway Hostess, Go Into Your Dance), Dave Gould (Broadway Melody of 1936, Folies Bergère), Sammy Lee (King of Burlesque), Hermes Pan (Top Hat), LeRoy Prinz (All the King's Horses, The Big Broadcast of 1936), and Benjamin Zemach (She).
You May Also Enjoy:
ZergNet
Like us on Facebook
Posted by Walter L. Hollmann at 1:48 PM

Email ThisBlogThis!Share to TwitterShare to FacebookShare to Pinterest
Labels: $1000 a Minute, 1935, Barbary Coast, I Dream Too Much, Love Me Forever, Oscars, Thanks a Million, The Bride of Frankenstein, The Crusades